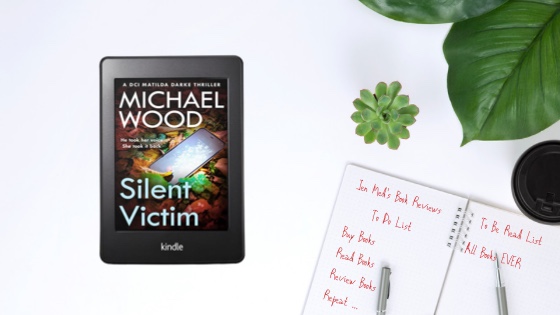 It is my absolute pleasure to share my thoughts on the latest book in the Matilda Darke series by Michael Wood and to wish the author a very happy publication day. I came late to the series but am totally addicted, so snap up any opportunity for an advance read. My thanks to publishers One More Chapter for the copy. Here’s what it’s about:

A CENSURED DETECTIVE WITH NO LEADS

DCI Matilda Darke and her team have been restricted under special measures after a series of calamitous scandals nearly brought down the South Yorkshire police force.

A BRUTAL ATTACK WITH NO WITNESSES

Now Matilda is on the trail of another murderer, an expert in avoiding detection with no obvious motive but one obvious method.

A DEPRAVED KILLER WHO LEAVES NO TRACES

When his latest victim survives the attack despite her vocal cords being severed, Matilda is more convinced than ever of the guilt of her key suspect. If only she had a way to prove it…

Silent Victim is an unputdownable crime thriller with twists that will make your jaw drop – perfect for fans of Kathy Reichs and Ann Cleeves.

Just when you think that Mr Wood cannot possibly go any darker … Well, yeah. Like we’d actually fall for that one, right? Michael Wood specialises in putting his characters through the ringer, and it’s safe to say that Silent Victim is no different. A complex and very violent case draws Mathilda back into the fold, but with half of her team gone, does she have everything she needs, including the steely determination, to catch herself a killer?

Well, if you want to know that then you’re going to need to read the book. Suffice to say that if you read the ending of the previous book, The Lost Children, then that sense of threat, that Matilda is in very real danger, continues to pervade Matilda’s thoughts and nightmares right into this latest novel. Partly because she is still receiving direct threats against her and her loved ones but, mostly, because she knows the man who wants his revenge against Matilda the most is not the kind to ever give up. It’s that which perhaps clouds Matilda’s judgment throughout the course of this investigation, which makes her act out of type and take risks which go beyond anything we may have seen from her before. It’s that sense of resignation, the lack of self preservation which adds a real tension to the story and kept me completely gripped.

I didn’t know what to expect, or who to suspect if I am honest. Michael Wood has done an excellent job of shielding the killer and even though one of his victims survives the abhorrent attack, her survival is not without it’s complications. I liked how this has been used in the book, not necessarily slowing the investigation, but allowing time for the author to explore Matilda’s role as a victim, whilst coaxing the awful truths out of the teenage victim, tilly. It’s sensitively explored but creates a real tight emotional bond between Matilda and Tilly and really heightens the emotions for the reader. I was completely invested in Tilly, in how she would cope with her trauma and the ultimate guilt felt by her mother, Amy, for not being able to protect her daughter. It takes the book beyond being another slice and dice thriller which I really appreciated.

There is a good amount of humour into the book to counter the darkness. The scenes in which Pat moves in with Matilda and Adele, and their attempts to secure a christmas turkey are enough to make anyone smile. And seeing Sian in her new career was another moment of pause, a chance to relax, before the author hits us with the next series of shocks. There are some moments of reflection for the team as well, some home truths spoken that are well needed to clear the dank air that has been hanging around them all since the conclusion of the last case.

But speaking of conclusions, that ending! What are you doing to us Mr Wood? If that doesn’t make you hungry for the next instalment (already out for pre-order by the way). I don’t know what will. Fans of the series are going to love this. Definitely recommended.

Michael Wood is a freelance journalist and proofreader living in Sheffield. As a journalist he has covered many crime stories throughout Sheffield, gaining first-hand knowledge of police procedure. He also reviews books for CrimeSquad, a website dedicated to crime fiction.

One thought on “Silent Victim by Michael Wood”