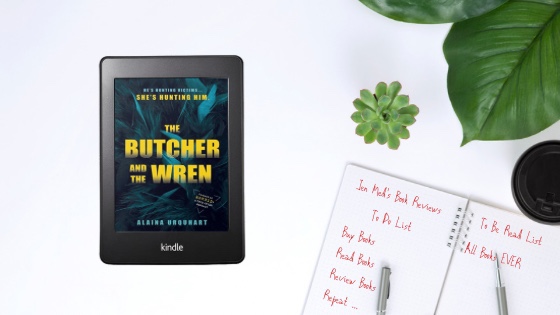 Very occasionally, I get a random query popping into my inbox from a publisher, asking if I want to be part of a cover reveal or review a book. It’s not as often as many, but enough to keep me entertained. One such gem that landed in my inbox was The Butcher and the Wren by Alaina Urquhart. I’ll be honest – when I agreed to help with the cover reveal promo, I completely forgot they were going to send a copy of the book so it was a nice surprise when it turned up. My reading has been a bit all over the place of late due to festivals, holidays and workload (and the weather hasn’t helped, so I needed a quick and satisfying read to fill an open slot on the blog. This ticked ALL the boxes and more. My thanks to publisher Michael Joseph for the advance copy. Here’s what the book was all about.

WREN WAS NEVER AFRAID OF THE DARK.
UNTIL SHE LEARNT THAT SOME MONSTERS ARE REAL. . .

In deep Louisiana, a serial killer with a taste for medical experimentation is completing his most ambitious project yet. The media call him ‘The Butcher’ – and, so far, he’s proved impossible to catch.

With her encyclopedic knowledge of humanity’s darkest minds, and years of experience examining their victims, forensic pathologist Dr Wren Muller is the best there is. The longer the Butcher’s killing spree continues, the more determined she is to bring him to justice. And yet, he continues to elude her.

As body after body pile up on Wren’s examination table, her obsession grows. Pressure to put an end to the slaughter mounts. And her enemy becomes more brazen.

How far is Wren willing to go to draw the Butcher into the light. . .?

An addictive read with straight-from-the-morgue details only an autopsy technician could provide, The Butcher and the Wren promises to ensnare all who enter.

Don’t you just love it when a book takes you by surprise and grips you so hard you cannot walk away from it. That’s what happened to me when I started reading The Butcher and the Wren bby Alaina Urquhart. It’s almost the dictionary definition of ‘unputdownable’ (if there is a dictionary definition of it), that one more chapter kind of read that turns into two and then three and then the next thing you know it’s just before midnight and you have read the whole dang thing. I started reading about six, with the intention of maybe reading half of the book before bed, but found that, upon reaching that half way point, I still wasn’t tired so thought I might as well read on for a while. A while turned in another hour, and by then I had less than 100 pages to read – what was the point of stopping when the story was really getting going.

It’s a short sharp read, packing an almighty punch in less than 250 pages, but don’t for one minute think you are being short changed. You are served on hell of story without any of the unnecessary guff that tends to pad out an increasing number of books these days. I am not familiar with the author’s podcasts for any other reason than I just forget they are a thing. But her experience as a True Crime podcaster has clearly been put to good use as the author takes us to the heart of the story really quickly and keeps the pacing fast and the tension so high that I really felt compelled to keep on reading. We get all the need to know bits, the background to our characters, a real sense of time and of place, but told through a brilliantly tight narrative that seems to draw from the idea that the time to tell this most intriguing of stories is finite.

And that’s not a bad thing. This is not a story for the faint hearted. Whilst not unnecessarily gratuitous or gory, it does tend towards the darker side of fiction. Much of what pain the killer inflicts on his victims is experienced by us as readers post event, but not all. We do get a first hand view of what some of his victims fall prey to. But it’s that sense of the hunt, the pulse pounding fear of knowing you are in a battle for your life that really comes through on the page. And we do know it’s a him that it doing this as, rather uniquely, we are introduced to our foe, immediately, with the second main protagonist, Pathologist Wren Muller, coming at a slightly later stage, after one of The Butcher‘s victims has been discovered.

I liked Wren as a character, liked her grit and focus, but also the very human and empathetic person, attuned to the fates of the people on her mortuary table. There was a great bond between her and the lead Detective on the case that developed beautifully on the page. As for ‘The Butcher‘, he was a really intriguing personality. Yes, some of the background to his nature may be cliched, but then cliches exist for a reason, and pulling the reader’s attention back to some of the most prolific, and in his opinion, failed (because they got caught), serial killers of the past half a century was a nice touch that put his abhorrent behaviour into perspective.

A fantastic, fast paced, suck you in and spit you out kind of a read that in spite of its slight appearance packs one hell of a punch. And don’t think that just because we know who the main dangers are in this torrid tango of wits, that you can rest easy. The author has thrown in some blinding twists and switchbacks that will serve to trip you up just when you might think you have everything sussed. That ending? Perfect. Wry smile territory. There are a couple of nods to another famous literary serial killer throughout the book, whose wit and wisdom may just, finally, have met his match. Definitely recommended.

Alaina Urquhart is the science-loving co-host of the chart-topping show Morbid: A True Crime Podcast. As an autopsy technician by trade, she offers a unique perspective from deep inside the morgue. Alaina hails from Boston, where she lives with her wonderful husband, John, their three amazing daughters, and a ghost Puggle named Bailey. She is about 75 percent coffee, and truly believes she and Agent Clarice Starling could be friends.

Before writing her first psychological horror novel, she received degrees in criminal justice, psychology, and biology. When she isn’t hosting Morbid, she hosts the Parcast original show Crime Countdown, and a horror movie podcast called Scream!. Her days are usually spent either recording or eviscerating. The way she sees it, when she hangs up her microphone for the day, it’s time to let the dead speak.