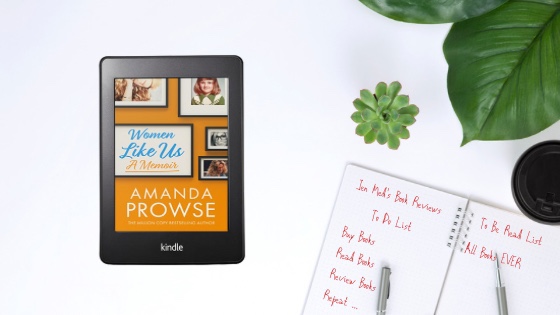 Today I am delighted to join the audiobook tour for Women Like Us, Amanda Prowse’s self narrated memoir. My thanks to Zara Gillick at FMcM Associates for the tour invite and to Brilliance Audio for the advance copy of the audiobook. Here’s what it’s all about:

Amanda Prowse has built a bestselling career on the lives of fictional women. Now she turns the pen on her own life.

I guess the first question to ask is, what kind of woman am I? Well, you know those women who saunter into a room, immaculately coiffed and primped from head to toe?

If you look behind her, you’ll see me.

From her childhood, where there was no blueprint for success, to building a career as a bestselling novelist against all odds, Amanda Prowse explores what it means to be a woman in a world where popularity, slimness, beauty and youth are currency—and how she overcame all of that to forge her own path to happiness.

Sometimes heartbreaking, often hilarious and always entirely relatable, Prowse details her early struggles with self-esteem and how she coped with the frustrating expectations others had of how she should live. Most poignantly, she delves into her toxic relationship with food, the hardest addiction she has ever known, and how she journeyed out the other side.

One of the most candid memoirs you’re ever likely to read, Women Like Usprovides welcome insight into how it is possible—against the odds—to overcome insecurity, body consciousness and the ubiquitous imposter syndrome to find happiness and success, from a woman who’s done it all, and then some.

Amanda Prowse is an author whose work I am aware of. I have some of her books on my TBR list but, to my embarrassment, I’ve not yet read them. But when it came to this audiobook tour, I admit I was intrigued. With such a successful career behind, and no doubt still in front of her, having the chance to learn a bit more about the woman behind the stories definitely appealed.

Whether you are a long time fan of her writing, a woman just navigating life, or even dare I suggest, a man trying to better understand the fears of the women in your life, this is a book I think everyone should read. So much of this book I think you will either relate to or, at the very least, recognise in the faces and actions of the people you love. Because Amanda Prowse’s searingly, and often emotionally, honest memoir taps into some of the many feelings, concerns and moments of self doubt that I am certain many of us have suffered over our lives. Too many.

Can you imagine now an author, who has had so much success, effectively being told by their teacher to give up on the idea of being an author? To choose ‘plan B’ instead? Taking listeners (and readers) from her early childhood years, growing up in the circle of a wonderful family and some very strong matriarchal influences, through awkward teenage years that were blighted by health challenges (an understatement) and darker moments that were to shape her future self, Amanda Prowse guides us through a life which is beset with successes, failures, love, loss and a constant, overwhelming sense of self-doubt and self loathing as she tried to find her perfect self, largely succeeding in losing exactly that which she sought along the way.

It’s fair to say that the author has lived a rollercoaster existence and she brings this to life on the page in a narrative that really did speak to me, especially when she spoke of the struggle she had to conquer her weight and the body image problems she had suffered over the years. From starving herself in her teenage years, to the self-destructive over-eating that has dominated her life in the post menopausal years, body-image, that constant, incessant, media fuelled utopia of the ‘perfect body’, informed her life in a way that almost destroyed it.

I can relate, even though I may not have been through many of the challenges that the author has experienced – a broken marriage and the painful loss of successive miscarriages. I haven’t been in the position to know that kind of pain. But a childhood of being told I was ugly, became that self fulfilling prophecy of overeating, hiding behind being fat as a way to avoid people as ‘no-one wants to befriend the fatty’, feeing judged at every turn, fuelling further descent into weight gain. Everything that Amanda Prowse relays in this book, I could understand, the only difference being that she has her husband and that unconditional love of her family, something I’ve actively avoided. I think everyone needs a Simeon in their life. Not that the love of another is the be all and end all, but that unconditional support and understanding certainly helps on the road to accepting who you are.

There won’t be a single woman out there who won’t have stopped and looked in a mirror at some point and wanted to be better, thinner, taller, fitter, prettier. Amanda Prowse captures that feeling in these pages, and in narrating the story herself gives it a weight (no pun intended) and emotional heart that really hits home. The book serves not necessarily as an answer to that eternal question ‘how can I be a better me’ but certainly, for those of us where weight yo-yos, both high and low, it certainly gives food for thought and a reminder that you are not alone.

Nobody is perfect. And really, who would want to be? Amanda Prowse has captured all of those imperfections, the self-criticism, anxiety and apprehension that forms a backdrop to too many of our lives. The book acts as a reminder to us all that a beautiful smile can hide a world of pain, and success in one field is no guarantee of lifelong happiness. The author acknowledges that obesity is every bit as much a mental health issue as anorexia or bulimia, and opens up the subject for discussion with a brutal self exploration and total honesty regaring her own battle with her weight, reminding us all that it is okay to be perfectly imperfect.

A powerful and memorable read.

Amanda Prowse is an International Bestselling author whose twenty-six novels, non-fiction title and seven novellas have been published in dozens of languages around the world. Amanda is the most prolific writer of bestselling contemporary fiction in the UK today; her titles also consistently score the highest online review approval ratings across several genres. Her books, including the chart topping No.1 titles What Have I Done?, Perfect Daughter, My Husband’s Wife, The Girl in the
Corner and The Things I Know have sold millions of copies across the globe.

A popular TV and radio personality, Amanda is a regular panellist on Channel 5’s ‘The Jeremy Vine Show’ and numerous daytime ITV programmes. She also makes countless guest appearances on BBC national independent Radio stations including LBC and Talk FM, where she is well known for her insightful observations and her infectious humour. Described by the Daily Mail as ‘The queen of family drama’ Amanda’s novel, A Mother’s Story won the coveted Sainsbury’s eBook of the year Award while Perfect Daughter was selected as a World Book Night title in 2016.