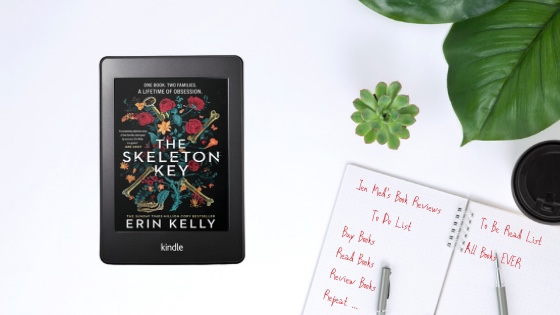 Today I am delighted to share my thoughts on The Skeleton Key, the brand new thriller from Erin Kelly, which is out today. Happy publication day. My thanks to publishers Hodder & Stoughton for the advance copy of the book. Here’s what it’s all about:

THIS REUNION WILL TEAR A FAMILY APART …

Summer, 2021. Nell has come home at her family’s insistence to celebrate an anniversary. Fifty years ago, her father wrote The Golden Bones. Part picture book, part treasure hunt, Sir Frank Churcher created a fairy story about Elinore, a murdered woman whose skeleton was scattered all over England. Clues and puzzles in the pages of The Golden Bones led readers to seven sites where jewels were buried – gold and precious stones, each a different part of a skeleton. One by one, the tiny golden bones were dug up until only Elinore’s pelvis remained hidden.

The book was a sensation. A community of treasure hunters called the Bonehunters formed, in frenzied competition, obsessed to a dangerous degree. People sold their homes to travel to England and search for Elinore. Marriages broke down as the quest consumed people. A man died. The book made Frank a rich man. Stalked by fans who could not tell fantasy from reality, his daughter, Nell, became a recluse.

But now the Churchers must be reunited. The book is being reissued along with a new treasure hunt and a documentary crew are charting everything that follows. Nell is appalled, and terrified. During the filming, Frank finally reveals the whereabouts of the missing golden bone. And then all hell breaks loose.

From the bestselling author of He Said/She Said and Watch Her Fall, this is a taut, mesmerising novel about a daughter haunted by her father’s legacy . . .

I really loved this book. Packed with mystery, an undulating tension and characters who were not always likeable, let alone trustworthy, it captured my imagination and my attention from the very opening scenes and did not let go.

I love a book that can do that. I was suckered in from the off, desperate to know the fate of the victim from those first few pages, and wanting to understand what had driven someone to do something so shocking and seemingly insane. The simple answer? Obsession, that and a very fragile state of mental health, the latter of which only fed the former. The cause of that obsession? A children’s book inspired by an old folk song, and a belief that what was contained within it was based entirely in reality and not the author’s imagination.

In The Skeleton Key, Erin Kelly introduces us to two families, tied together by history, success and, more recently, marriage. The Churchers, led by patriarch Sir Frank Churcher, author of The Golden Bones, and the Lallys, have a history spanning back decades, one which is to be brought back into the media spotlight by the release of a 50th anniversary edition of the book, and a tie in computer game. The book, a kind of treasure quest picture book, led its original readers to search for the hidden bones of Elinore, a search which grew out of control, with devastating consequences for many searchers and for the Churcher’s daughter, Nell.

I loved the suspense that fed through this book, the constant feeling of the truth being just out of reach. The depiction of the kinds of obsession and addiction, both healthy and otherwise, that fed the long term readers and fans of the book, as well as those at the heart of its creation, had a real ring of authenticity. The danger and threat posed by those most ardent, and deranged, amongst the fans was palpable. We’ve all seen it, the way some people turn the love of something, be it a book, a film or even idolising an actor, into something dark and twisted, and when such an overwhelming fascination is matched by declining mental health the results can be catastrophic. Erin Kelly has captured perfectly in the sometimes manic, always overbearing nature of some of the characters and the often excessive lives led by the two central families.

Speaking of the characters, with the possible exception of the narrator, Nell, there was just something under the surface that stopped me from ever trusting any of them completely. You got a sense that both households, no matter how close they appeared to be, were nursing secrets, some toxic, all with the potential to see the whole fragile ecosystem they had built up, tumble. There was an inherent toxicity that threads through the familiarity of the two families, some tiny element that I couldn’t put my finger on but that you could feel festering.

Throughout the book there is a very common theme – the silencing of the women who live at the heart of the story. Their feelings, their emotional well-being always seemed secondary to that of patriarch Frank Churcher, and to a lesser degree, Lal, but at what cost? Layer upon layer of deception and duplicity is stripped away, but as the speed at which revelations occur towards the end increased, I was both shocked by the turn of events, and yet not remotely surprised. But one thing that couldn’t be called into question was how intertwined their lives all were, or how far any of the characters, with one notable exception, would go to protect those they loved. It forces us as readers to consider how far we would go in similar circumstances.

This is a mystery within a mystery. A story of life lived to excess. Of fame, fortune and obsession. Of the abuse of power and status and of the power of lies to destroy lives. Most of all it is a story of family and unquestioning loyalty, even in the face of absolute betrayal. Action moves seemlessly back and forth in time, mostly set in the present day but with scenes that are set in the families pasts that serve to give clarity and context to what comes to pass. Erin Kelly has written a perfect mystery, one that kept me completely absorbed to the very last page. Textured, multi-faceted in both story and character, if you have not read Erin Kelly yet, this would be a very good place to start.

I loved Watch Her Fall, and I love this just as much, Erin Kelly is definitely heading right onto my must read author list. And, my word, is that cover not just gorgeous? Totally befitting such a gothic tale. Do yourselves a favour and grab a copy now. It’s the kind of book I can imagine on TV with a nice adventure game/app tie in to boot.

So I’ll give it one of these too:

Erin Kelly is the Sunday Times bestselling author of The Poison Tree, The Sick Rose, The Burning Air, The Ties That Bind, He Said/She Said, Stone Mothers/We Know You Know, Watch Her Fall and Broadchurch: The Novel, inspired by the mega-hit TV series. In 2013, The Poison Tree became a major ITV drama and was a Richard & Judy Summer Read in 2011. He Said/She Said spent six weeks in the top ten in both hardback and paperback, was longlisted for the Theakston’s Old Peculier crime novel of the year award, and selected for both the Simon Mayo Radio 2 and Richard & Judy Book Clubs. She has worked as a freelance journalist since 1998 and written for the Guardian, The Sunday Times, Daily Mail, New Statesman, Red, Elle and Cosmopolitan. Born in London in 1976, she lives in north London with her husband and daughters.

2 thoughts on “The Skeleton Key by Erin Kelly”