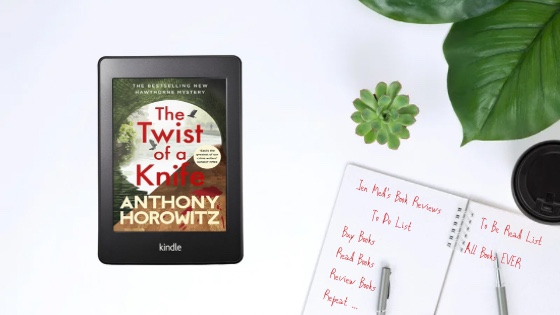 Today I am delighted to share my thoughts on The Twist of a Knife, the latest book in the Hawthorne series by Anthony Horowitz. My thanks to publisher Penguin, for the advance copy via Netgalley. Here’s what the book is all about:

That’s what reluctant author Anthony Horowitz tells ex-detective Daniel Hawthorne in an awkward meeting. The truth is that Anthony has other things on his mind.

His new play, Mindgame, is about to open in London’s Vaudeville theatre. Not surprisingly Hawthorne declines a ticket.

On opening night, Sunday Times critic Harriet Throsby gives the play a savage review, focusing particularly on the writing. The next morning she is found dead, stabbed in the heart with an ornamental dagger which, it turns out, belongs to Anthony and which has his finger prints all over it.

Anthony is arrested, charged with Throsby’s murder, thrown into prison and interrogated.

Alone and increasingly desperate, he realises only one man can help him.

But will Hawthorne take his call?

Oh I really do love this series. And I’m not just saying that because I know how well being critical of Anthony Horowitz’s creativity worked out for Harriet Throsby … I genuinely do like these books, the ultimate in deliciously twisty and thoroughly entertaining meta-fiction, which, in this particular instance sees our author, and narrator, in a particularly sticky situation. This is a series about and author, Anthony Horowitz, who is commissioned to write up the investigations of former Detective, Daniel Hawthorne. Or at least, he was. A three book deal and all three books are now written. Hawthorne wishes to carry one, Horowitz less so. And so when he finds himself accused of murder and in need of Hawthornes help to prove his innocence … well you can just imagine how that conversation went.

This book is set very much in Anthony Horowitz’s world. A lot of the action surrounds the staging of his play, Mindgame, and its opening night at the Strand Theatre in London, an opening night which, despite completing a successful regional tour, received less than favourable reviews, including a particularly savage one from the books soon-to-be victim, Harriet Throsby. But surely there are far worse things than a bad review, right? Personally I’m often drawn to those plays and films that are critically panned, and they often turn out to become cult classics, so it’s certainly not anything you would expect someone to commit murder over. Unless you are Detective Inspector Grunshaw and DC Mills, two people who have their own reasons for holding a grudge against the author and his Detective friend, and who seem to delight in all the evidence pointing squarely in his direction.

This book is a beautiful mix of humour, character and mystery. From the cast and crew of the ill-fated Mindgame, to the Detectives who are hot on Anthony Horowitz’s trail, to the author himself and the wonderfully matter of fact Hawthorne, each person we meet adds a new dimension to the story. Some brilliantly exaggerated personalities (where I’m sure inspiration has been drawn from true life, even if the author can’t or won’t say where) and acute observations framed in some truly witty turns of phrase made this book an absolute delight to read. Each character, from the actors, to the director to the producer, appeared larger than life. A strange concoction of ego, vanity and enthusiasm, all enshrouded, to a degree, in a thin veil of secrecy. The whole concept of Mindgame (the play) was to unsettle the viewer, to subtly change and alter perception, something which was skilfully reflected in the way in which we viewed the various characters over the course of the investigation.

I tore through the book, finishing in just one afternoon and evening. It sounds awful, but it was fun reading about the author’s misfortune (sorry Mr H 😬😉) Certain as I was, obviously, of his innocence and knowing that, eventually, Hawthorne would find his way to the truth, I was still completely intrigued as to which of the remaining production members might be responsible, if any of them actually were. Harriet’s relationship with her own family also seemed to leave a lot to be desired. The more we learned of them all, the clearer it became that any of them might have had a motive, but all seemingly had irrefutable alibis. And you always come back to the question of whether a bad review is really worth killing for or was there something far darker in play? There were plenty of surprise reveals, things I both had and hadn’t been expecting, but which drew us to a very fitting and satisfactory conclusion. Very Hercule Poirot in delivery it was too.

This is the very best in ‘cosy-crime’ if you have to label it that way. It’s no high action, high thrill chases, although there are some moments that get you right on the edge of your seat. But these books are lighthearted and entertaining, and absolutely packed with puzzle and mystery that I find myself just longing to solve. At following on from that very tantalizing and wonderful of endings, I can only hope there will be plenty more to come. Absolutely, without question, recommended. Loved it.

So I have to give it one of these really, don’t I?

Harriet Throsby might not have liked Mindgame, but The Twist of a Knife was an absolute triumph..

Bestselling author Anthony Horowitz has written two highly acclaimed Sherlock Holmes novels, The House of Silk and Moriarty; two James Bond novels, Trigger Mortis and Forever and a Day; three Detective Hawthorne novels, The Word is Murder, The Sentence is Death and the forthcoming A Line To Kill, and the acclaimed bestselling mystery novels Magpie Murders and Moonflower Murders.

He is also the author of the teen spy Alex Rider series, and responsible for creating and writing some of the UK’s most loved and successful TV series, including Midsomer Murders and Foyle’s War. In January 2022 he was awarded a CBE for his services to literature.

4 thoughts on “The Twist of a Knife by Anthony Horowitz”