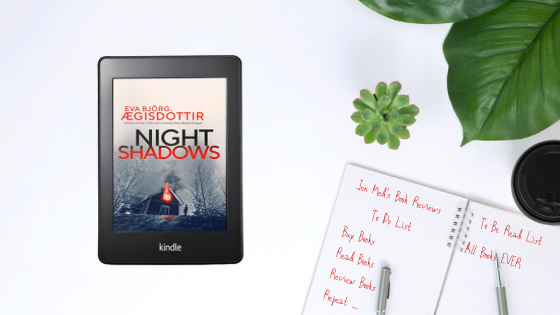 Today I am absolutely delighted to join the blog tour for Night Shadows, the brand new book in the Hidden Iceland series from Eva Björg Ægisdóttir. My thanks to publisher Orenda Books for the advance copy for review, and to Anne Cater of Random Things Tours for the tour invite. Here’s what the book is all about:

The small community of Akranes is devastated when a young man dies in a mysterious house fire, and when Detective Elma and her colleagues from West Iceland CID discover the fire was arson, they become embroiled in an increasingly perplexing case involving multiple suspects. What’s more, the dead man’s final online search raises fears that they could be investigating not one murder, but two.

A few months before the fire, a young Dutch woman takes a job as an au pair in Iceland, desperate to make a new life for herself after the death of her father. But the seemingly perfect family who employs her turns out to have problems of its own and she soon discovers she is running out of people to turn to.

As the police begin to home in on the truth, Elma, already struggling to come to terms with a life-changing event, finds herself in mortal danger as it becomes clear that someone has secrets they’ll do anything to hide…

I’m really enjoying reading the Hidden Iceland series from Eva Björg Ægisdóttir. It’s a slow burning kind of drama, reflective of the less frantic pace of life you might expect in and Iceland town, but not for one moment lacking in mystery or tension. From the very start of the book we are drawn into the intrigue and left curious as to exactly whose presence they are in and how they came to be in such a predicament to begin with. Then there is the question of how this came to be the precursor to all that follows. In the uncertainty and the tragedy of the fire that Elma and Sævar are called in to investigate, I almost forgot the scene that greeted me at the start of the novel until I was confronted with the truth during the course of the investigation.

But that’s the beauty of the book. We are so absorbed in the case of the young man who died, that everything else becomes seemingly inconsequential. Until it isn’t. Keep an eye open for those all important clues. They are all there, hidden in plain sight. The power of a good mystery when reader, as voyeur, still doesn’t understand the significance of what they know until just the right moment in the story. Eva Björg Ægisdóttir has played it perfectly in Night Shadows, with a story that is so full of twists and uncertainties, of characters whose importance we aren’t quite sure of and whose motives are seemingly suspect, even when they are most likely completely innocent.

Then there is that sense of being watched, of being watched, that atmospheric presence and sense of threat that bubbles along beneath the main narrative that prevents you ever settling completely. I was always waiting for that next unexpected twist in the story. That key reveal which pushes the story along to it’s inevitable conclusion. It wasn’t quite edge of the seat territory, but it was close enough and the mystery was completely compelling, the behaviour of some of the characters abhorrent, and I was keen to see justice that justice would be done.

I do really like the characters of Elma and Sævar. It’s fair to say that their relationship has taken an unexpected turn this time around, one that will have far reaching changes and consequences for them both. But, in spite of many scenes to the contrary, they do have a great chemistry and their friendship and partnership as Detectives drew me into the investigation as it always done. The author has a beautiful turn of phrase, her narrative skill always instilling in the characters a real sense of authenticity, even when their behaviour is less than favourable. One particular character really made my skin crawl, a predatory behaviour which was all to believable and which drove a vital aspect of the investigation. But whether portraying anger or grief, excitement or apprehension, the author has a knack for really making the emotions seep from the page, helped by a perfect translation by Victoria Cribb that brings the whole story to life.

Setting in these stories is key, and having the series set in Akranes, rather than the major urban centre of Reykjavik, gives the whole story an edge that might otherwise not be possible. There is a small town feel to the investigation, the sense of connectivity where every part of the investigation, however seemingly trivial, is linked. And you do get a key sense of place, so much so that even never having been to Iceland, or even having seen pictures of Akranes, I have a really vivid picture in my mind of the scenes as they play out on the page. There is a key theme of family within this book which plays out on many levels, some surprising, others with a more tragic edge, but all of them relatable and able to elicit a variety of emotions in the reader. We are left with a curious sense of hope by the end of the book, in spite of all the tragedy that unfolds, and I suppose it is that I felt I wanted to hold onto even after the investigation ended.

The ending of the book is a mixture of threat, tension, frustration and surprise, the very final pages playing out in a way I was not expecting at all. It is far from predictable, even though some of the story threads may be more obvious than others, but it was most definitely satisfying, and another great addition to a series I have been thoroughly enjoying. If you’ve loved the first two books, this is an absolute must read and a perfect addition to my bookshelves.

Born in Akranes in 1988, Eva moved to Trondheim, Norway to study her MSc in Globalisation when she was 25. After moving back home having completed her MSc, she knew it was time to start working on her novel. Eva has wanted to write books since she was 15 years old, having won a short story contest in Iceland. Eva worked as a stewardess to make ends meet while she wrote her first novel, The Creak on the Stairs. The book went on to win the CWA Debut Dagger, the Blackbird Award, was shortlisted (twice) for the Capital Crime Readers’ Awards, and became a number one bestseller in Iceland. The critically acclaimed Girls Who Lie (book two in the Forbidden Iceland series) soon followed, with Night Shadows (book three) following suit in July 2022. Eva lives with her husband and three children in Reykjavík.