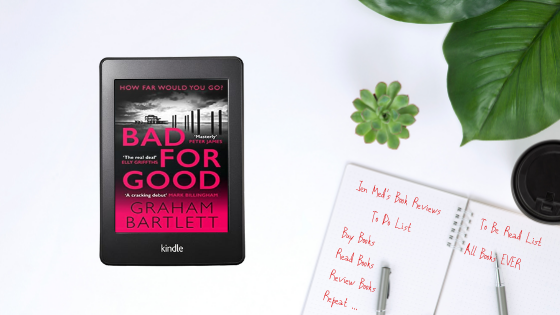 Today I’m delighted to share my thoughts on Bad For Good, the debut thriller from Graham Bartlett. My thanks to publisher Allison and Busby for the advance copy via Netgalley. Here’s what the book is all about:

How far would you go?

The murder of a promising footballer, son of Brighton’s highest-ranking police officer, means Detective Superintendent Jo Howe has a complicated and sensitive case on her hands. The situation becomes yet more desperate following devastating blackmail threats.

Howe can trust no one as she tracks the brutal killer in a city balanced on a knife edge of vigilante action and a police force riven with corruption.

This is a book I have been looking forward to for some time. I mean, the author certainly knows what he’s talking about and, having worked as advisor to authors and screenwriters, he was bound to have picked up the odd tip or two about crafting the tension on the page. Not that experiencing it first hand over the course of his career won’t have given Graham Bartlett experience enough of course. But how did all of that knowledge translate onto the page? Quite brilliantly as it turns out, with a story which is a strong a socio-political commentary as it is straightforward adrenalin spiking thriller. For a debut novel, Bad For Good certainly packs a punch and I can’t to see how the author carries us forward from here.

From the very early scenes in this book you can feel the authenticity ooze from the page, along with what can only be described as the overwhelming frustrations of modern policing. Investigations stymied by lack of resource, powers that be who are more concerned with budgets and headlines than they are the true root cause of a seeming crime epidemic that is starting to overtake the south coast region. Where once several forces operated, now there is one singular police district , a pool of resource that is never quite enough. Luckily for businesses in Brighton, there is an alternative. A group ready to step in where the police can’t.

And therein lies the problem. At least as far as Detective Superintendent Jo Howe is concerned. She is the principal Detective in this complicated and deadly investigation, one which pits publicly funded policing against private industry, in a case with a very dark heart. I really liked Jo as a character. She has a hell of a job on her hands, handed somewhat of a poison chalice after her predecessor, Phil Cooke’s, son is murdered, faced with having to investigate his murder whilst trying hard to get to the root of another evil that is blighting the streets. She’s far from perfect, her past almost as complicated as the case she is investigating, her relationship with Cooke the one chink in her otherwise sturdy armour. But as a character, Officer, Mother, Wife, she felt very real, and someone I could really get behind as the story progressed.

Jo Howe is just one of many characters who inform and direct the action, some of whom I’m sure are made of snippets of people the author has met and worked with in the past, many more of which I hope weren’t. Phil Cooke, whilst not an entirely sympathetic characters throughout the course of the book, was someone else I became quite invested in. Placed in an impossible position, with an ill wife and now a murdered son, I could see why he acted as he did, even if I could not quite absolve him of his bad decisions. I’d have expected better, but was intrigued to see just how his full story would come to pass. The author gave him just the right balance of positive and negative traits to make him engaging and to keep me drawn into his story.

There are several threads to this story, from the impact of low numbers of serving officers on duty, to knife crime as reflected in the murder of Cooke’s son. Missing persons, corruption, profiteering and vigilantism all play a major role in a case which seems at first to be quite straight forward but that becomes more complicated with each page turn. There is an undercurrent of threat from the very start, and a tension that bubbles along until near the end where it escalates into full on, heart pounding action where everything is at stake. It made the final chapters of the book so exciting, so fast, that I almost had to re-read the ending to make sure I hadn’t missed anything. I was certainly an explosive and game changing ending, and one I’m really intrigued to see the aftermath of.

If you like a really authentic feeling police thriller, with great characters, and high stakes, high tension storylines then I would definitely recommend picking this book up. Dare I say that some of Graham Bartlett’s clients might want to watch their backs? They’ve some real competition here and I can’t wait to see what he dreams up next.

Graham Bartlett is former detective and Chief Superintendent of Brighton Police. He is now a crime fiction and police advisor to authors and TV writers.

One thought on “Bad For Good by Graham Bartlett”