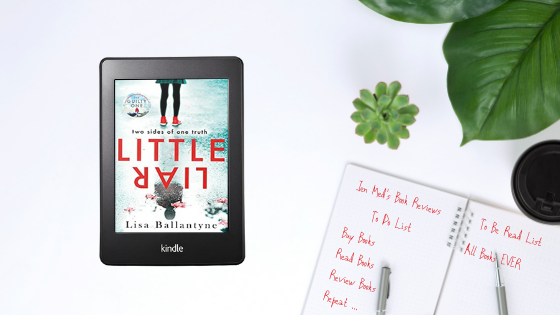 Today I’m taking a look at a title I’ve had on my TBR for far too long – Little Liar by Lisa Ballantyne. My thanks to the publisher, Piatkus, who had provided the review copy via Netgalley. Here’s what it’s all about:

While Nick Dean is enjoying an evening at home with his family, he is blissfully unaware that one of his pupils has just placed an allegation of abuse against him – and that Nick’s imminent arrest will see the start of everything he knows and loves disintegrating around him.

Because, mud sticks, right? No matter if you’re innocent or guilty.

When Angela Furness decides that enough is enough – she hates her parents, hates her friends and, most of all, despises what has recently happened at school – she does the only thing she knows will get her attention: calls the police. But Angela is unaware that the shocking story she is about to tell will see her life begin to topple.

Because, once you’ve said what you’ve said, there’s no way back, right? No matter if you’re innocent or guilty.

In a gripping tale of two families torn apart by one catastrophic betrayal, Little Liar illustrates the fine line between guilt and innocence, and shows that everyone has their secrets, even those we ought to trust the most…

There are two sides to every story. That is a fact. And that is the key thing to remember when making your way through the complicated and tangled case that is set before us in Little Liar. If you like a book that will keep you guessing and second guessing until the end, that will keep you wondering just which of the two people who are really central to this whole sorry tale might be telling the truth, then this will definitely be a book for you. The book does touch upon a case of child sexual abuse, but only really on the periphery, so that is one thing to be mindful of, but it is more about the impact of the allegations themselves upon the two families involved, that it is about making the reader live through the abuse itself. This is about Angela and Nick, the accuser and the accused, and the challenges they both face in getting those around them to hear what they have to say.

Lisa Ballantyne has done a great job of bringing a very difficult situation to the fore, in a way which engages the reader but doesn’t make light of the very horrific and emotional circumstances of what lies at the heart of Angela’s accusations. From the moment we meet here, we know that there is something very different, very angry, about Angela, and it doesn’t take long for the potential cause of her anger and self loathing to come to light. There are some very difficult scenes involving Angela, around her hatred, her complex relationship with her separated parents and her isolation at school which the author has managed to capture in a sympathetic way, but one which also makes you have that small slither of doubt about whether everything that the victim says is true.

Part of the reason for doubting Angela’s story comes from the way in which the accused is portrayed to readers. From the moment we first meet Nick we see a man who is very much in love with his wife and very much a family man. He is kind, loving, seemingly generous and exactly the kind of person you would trust to be around your children in school. Exactly the kind of man who makes for a perfect predator in fact. And as the layers of his perfect existence are slowly peeled away, we see enough of his personality to make us doubt him too.

So who is telling the truth? Angela or Nick? This is a classic case, and one which plays time and again in the media, especially in recent years. There have been so many documented cases of alleged sexual abuse being overlooked or discounted because of lack of evidence or because the accuser is troublesome – very much the case with Angela. And, naturally, sympathies would be with the child as her behaviour would suggest there is a far darker reason for her anger and hate than can be explained away by a broken home.

But things are rarely that simple and in this case I found myself torn between believing the two characters, the author making neither one entirely sympathetic, but developing their characters in such a way that, to a degree, I found I wanted to believe them both. I couldn’t fully hate Nick, even if he was less wholesome than he may first have appeared. but I didn’t wholly disbelieve Angela either. Lisa Ballantyne kept my guard up and my certainty about what the truth was wavering every so often by the way she fed in little snippets of information that shook up everything I thought I knew. I kind of expected and yet was still shocked by the ending, and yet it played perfectly into the way the whole story had been set up and seemed a very fitting end to a complex and emotive storyline.

The story really did reflect reality, that sense of trial by media (and social media), they way in which, with these kinds of cases, the presumption is of guilt until proven innocent and the way in which an allegation made can taint every relationship and expectation moving forward. It also handled the exploration of the impact of abuse in a careful and considered way. Sometimes bad children are just bad children, but, more often than not, there is something there, some hidden truth, that causes them to act up. That cry for help in the only way they know how.

Sometimes emotional, often thought provoking, and with characters and a storyline that stayed with me long past the last page, I know I’ll be looking for more books by the author in future.

Lisa Ballantyne is the author of the Edgar Award-nominated The Guilty One which was translated into nearly thirty languages. Her second novel, Redemption Road, was a USA Today Bestseller. Originally from Armadale, in Scotland, she now lives in Glasgow.

One thought on “Little Liar by Lisa Ballantyne”