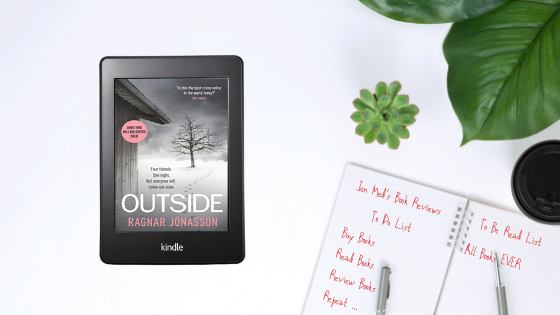 Today I’m sharing my thoughts on Outside, the brand new novel by Ragnar Jónasson. I love the authors writing and have been looking forward to tucking into this latest, chilling, thriller. My thanks to publisher MIchael Joseph for the advance copy. Here’s what it’s all about:

In a deadly Icelandic snowstorm, four friends seek shelter in an abandoned hunting lodge. Miles from help, and knowing they will die out in the cold, they break in, hoping to wait out the storm until morning.

But nothing can prepare them for what’s inside . . .

With no other option, they are forced to spend a long and terrifying night in the cabin: watching as intently and silently as they themselves are being watched.

As the night darkens, old secrets spill into the light, and tensions rise between the four friends. Soon it’s clear that what they’ve discovered in the cabin is far from the only mystery lurking there.

There is just something about certain books that mark them out as being very clearly written by certain authors. In the case of a book by Ragnar Jónasson it is his ability to take a vast and remote location and make it feel so incredibly isolated and claustrophobic, whether a character is amongst company or not. That is most definitely the case with Outside, a story in which a group of four friends find themselves stranded in a remote and abandoned hunting lodge, seeing out the unexpected blizzard that blights their very ill-fated hunting trip. Well … I say abandoned. It seems that they are not alone in seeking refuge from the storm and that, in truth, is just the start of their problems.

Ragnar Jónasson has a real knack for portraying the raw beauty of the more remote parts of Iceland and this is worked to its full effect in this book. You can almost feel the chill radiate from the page as the friends battle the elements, feel the dank walls of the hut closing in around you as you read through the incredibly tense circumstances we are privy to. There is an underlying fear amongst the foursome, not only because of the stranger in their midst and his refusal to communicate with them, but also a kind of intuition that all is not as it seems amongst these supposedly good friends. They are not as close as they first seem, and as the author explores the circumstances that brought them together in the first place, and the more we learn of their individual characters, the more we get a sense of just what might be happening. There is a sense of mystery, or a secret just about being held in check, one that has the potential for devastating consequences, but it is not until well into the book that we get a real feeling of just what that is.

I won’t lie – our four protagonists, Ármann, Daníel, Helena and Gunnlaugur – were not necessarily an easy bunch to like. I never quite settled in their presence, and for good reason as it turns out. They make for a very strange group, none of them having anything obvious in common other than a shared education and, with the exception of maybe Ármann and Helena, not really equipped or skilled for a long trek in the wilderness in search of game. It adds a layer of tension to the story, as well as an authenticity to the growing unease and perhaps paranoia of the bunch as the night goes on, particularly Gunnlaugur. He is the most nervous and unstable of the lot, the outsider of the group and the greatest affected by their plight. The way in which the author develops their characters is spot on, the hot and cold nature of tempers, the diversity of their personalities and the extremes of their behaviours so acutely observed as Ragnar Jónasson has a real skill for. It meant that despite not liking them, I was intrigued to learn their fates. To see who would be the first of them to crack. And, in all honesty, to find out who the silent stranger might be.

Translation by Victoria Cribb is excellent, capturing the essence of the author in the narrative, but also really helping to make the descriptions and the tension bleed from the page. The fluctuations in tempo and tension are spot on, the quiet pauses to heighten fear and the impact of the intense moments of action that are to follow. This is a really atmospheric novel, one packed with secrets and deception, and one that doesn’t end in quite the way you might be expecting, but which is perfectly fitting nonetheless. Another cracking story that fans of the author will just eat up.

Ragnar Jónasson is an international number one bestselling author who has sold over two million books in thirty-two countries worldwide. He was born in Reykjavík, Iceland, where he also works as an investment banker and teaches copyright law at Reykjavík University.

He has previously worked on radio and television, including as a TV news reporter for the Icelandic National Broadcasting Service, and, from the age of seventeen, has translated fourteen of Agatha Christie’s novels. He is currently writing a novel with the Icelandic Prime Minister, Katrín Jakobsdóttir. His critically acclaimed international bestseller The Darkness is soon to be a major TV series.

5 thoughts on “Outside by Ragnar Jónasson trns by Victoria Cribb”