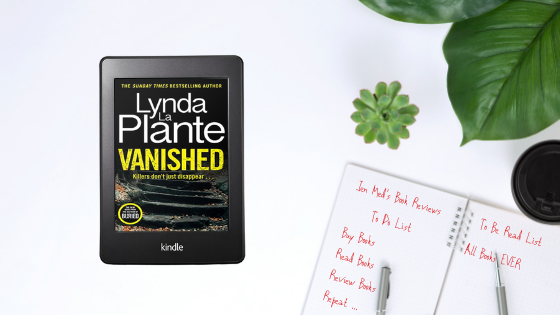 Today I’m delighted to share my thoughts on book three in the Jack Warr series by Lynda La Plante, Vanished. I’ve loved getting to know Jack over the course of the series and loved having the early access to the book. Here’s what it’s all about:

When an eccentric widow claims she is being stalked by her former lodger, Detective Jack Warr is the only person who believes her wild claims.

Days later, she is found brutally murdered in her home.

When the investigation uncovers an international drugs operation on the widow’s property, the case grows even more complex. And as the hunt for the widow’s lodger hits dead end after dead end, it seems that the prime suspect has vanished without a trace.

To find answers, Jack must decide how far is he willing to go – and what he is willing to risk – in his search for justice. Because if he crosses the line of the law, one wrong move could cost him everything . . .

I really like Jack Warr as a character. Intrepid Detective, he lives by his instincts, usually spot on, but has been known in the past to step maybe a fraction outside of the law, with (mostly) the best of intentions, obviously. When he is drawn into the world of widower Avril Jenkins, a woman who is sure that her former lodger is tormenting her by breaking in to her home at night, Jack is almost ready to write her off as eccentric just as many of his colleagues have already done. Almost … but not quite, and when Avril is found brutally murdered, it seems his instincts are proven correct once again. The investigation leads Jack and the team in a very unexpected direction, with revelations about the widow and her rambling property that no-one could have foreseen, not even Jack.

This was a really intriguing story. Perhaps slower in pace than its predecessors, it took me off in a direction I definitely hadn’t expected, as we are drawn into a world of drug dealing, murder and difficult family relationships. And it’s terrible timing for Jack with his wedding on the horizon and relations with his boss and mentor, DCI Simon Ridley, taking a decidedly frosty turn for reasons Jack just cannot fathom. There are plenty of twists in this story and the old house holds many secrets that are slowly uncovered. Just when you think the team have seen it all, there is a new revelation, and the whereabouts of Avril’s mysterious former tenant add another layer of uncertainty to an already complicated investigation. Add in some interdepartmental conflict between the team and the Drug Squad, as well as an accusation of potential misconduct that comes a little too close to home for Jack and it makes for quite a heady mix of a story.

In honesty, it was some of the quieter moments that really worked for me in this book. Seeing Jack in his domestic setting, preparing for his wedding in spite of all the distractions, and the tender relationship he has with his mother, really adds a different dimension to these stories. There is a strong emphasis on family throughout the story, not just Jack’s, but also Avril’s and that of one of Maggie’s colleagues and hit daughter. The story also brings Jack face to face with someone from his past too, someone who could derail his future but may also hold the key to one element of the investigation too.

As always, the tension and pacing is just right, the mystery and the emotion perfectly blended, tears fallin when needed, laughter and anger flowing in abundance too. It had a different feel, a slightly different tone, to the last book, but it was still a story I really enjoyed. There are moments of darkness, when we understand the full extent of the violence that Avril is subjected to, but seeing Jack finally having his perfect moment with Maggie is a real heartwarming touch and brought a much needed smile to my face. I’m keen to see what is next for Jack and the team. I’m really growing to like them.

Lynda La Plante was born in Liverpool. She is the author of nearly forty novels, all of which have been bestsellers. She trained for the stage at RADA and worked with the National theatre and RDC before becoming a television actress. She then turned to writing – and made her breakthrough with the phenomenally successful TV series Widows.

Lynda is an honorary fellow of the British Film Institute and was awarded the BAFTA Dennis Potter Best Writer’s Award in 2000. In 2008, she was awarded a CBE in the Queen’s Birthday Honours List for services to Literature, Drama and Charity.

Lynda La Plante is the first lay person to be awarded an honorary fellowship to the Forensic Science Society. In 2020 she launched the acclaimed Listening to the Dead podcast with former CSI Cass Sutherland, exploring forensic science and its impact on solving crimes.