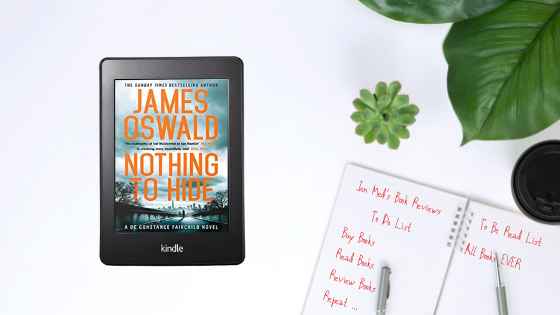 Today it’s time for Mandie to take a look at book two in the Con Fairchild series by James Oswald, Nothing To Hide. This has been a great series, and Con has been a fabulous character to get to know, even if her family life is a tad … complicated. You can read my thoughts on the book here. Read on for the important book stuff and Mandie’s thoughts.

Suspended from duty after her last case ended in the high-profile arrest of one of Britain’s wealthiest men, DC Constance Fairchild is trying to stay away from the limelight. Fate has other ideas . . .

Coming home to her London flat, Constance stumbles across a young man, bloodied, mutilated and barely alive. She calls it in and is quickly thrown into the middle of a nationwide investigation . . . It seems that the victim is just the latest in a string of similar ritualistic attacks.

No matter that she is off-duty, no matter that there are those in the Met who would gladly see the back of her, Con can’t shake her innate determination to bring the monsters responsible for this brutality to justice.

Trouble always seems to find her, and even if she has nothing to hide, perhaps she has everything to lose . . .

DC Con Fairchild is still feeling the fallout from events that saw her boss murdered and several of her colleagues taken down for corruption. Currently on suspension she is trying to stay out of trouble and avoid the press and failing miserably on both counts. When she comes across the body of what appears to be a stabbing victim close to where she lives Con finds herself smack bang in the middle of a case she is told to stay well out of. But if there is one thing that is certain, that is no matter what she tells her superiors, she will end up investigating what is going on.

I am quickly getting to like Con Fairchild. She is fiercely independent and has a stubborn streak that will often see her in trouble, yet she also has an increasing circle of people who she can turn to when things get bad for her. On the surface they may encourage her to stay out of things but when needed they are most definitely in her corner. Even when she is defying authority you can’t help but give a little “go for it” cheer quickly followed by the feeling that her actions are going to come back and bite her in the butt big style. Then again if you work in a place where the majority of your colleagues hate you and would happily see you gone, why would you want to play by their rules? We also get to learn a little more about her background and why she turned her back on what could have been a much quieter and safer life. As the book progresses you do have to wonder just how much more Con, and her family can take as once again things get close to home with an ending even I was not expecting.

This book has a decidedly darker feel to it than the previous one but with Madame Rose making another appearance along with a couple of other familiar faces its not hard to see why there is also a more mystical and otherworldly feel to it although how much of it is down to true beliefs or one person’s mad ideals is anyone’s guess. There are still plenty of lighter moments in the book, and these are a welcome foil to the harshness of the murders that take place giving the perfect balance for the reader. The pacing of the book is one that I have come to expect from James Oswald as he always manages to keep the reader engaged and ready for the next twist. I cant wait to see what he throws at Con next and just hope that she comes out the other side unscathed.

JAMES OSWALD is the author of the Sunday Times bestselling Inspector McLean series of detective mysteries, as well as the new DC Constance Fairchild series. James’s first two books, NATURAL CAUSES and THE BOOK OF SOULS, were both short-listed for the prestigious CWA Debut Dagger Award. AS COLD AS THE GRAVE is the ninth book in the Inspector Mclean Series.

One thought on “Nothing To Hide by James Oswald”