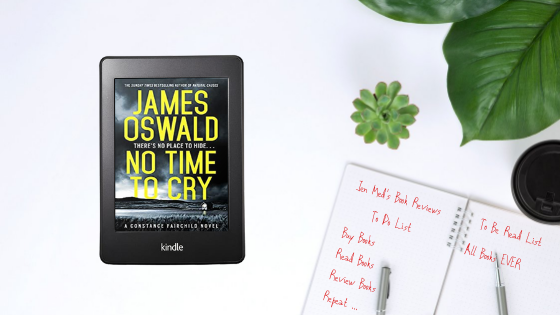 Today I’m passing the baton to Mandie who has a review of book one in the Con Fairchild series by James Oswald, No Time To Cry. I loved this series and you can find my thoughts on the book right here. Here’s what it’s all about:

Returning to their base of operations, an anonymous office in a shabby neighbourhood, she finds the bloodied body of her boss, and friend, DI Pete Copperthwaite. He’s been executed – a single shot to the head.

In the aftermath, it seems someone in the Met is determined to make sure that blame for the wrecked operation falls squarely on Con’s shoulders. She is cut loose and cast out, angry and alone with her grief… right until the moment someone also tries to put a bullet through her head.

There’s no place to hide, and no time to cry.

No Time to Cry is the first book in the DC Con Fairchild series by one of my favourite authors. I am not sure why it has taken me so long to start this series but as they say better late than never and on the plus side it does mean that I know I have two more books in this series waiting in the wings to be read and I don’t have to wait to read them.

With the book opening with Con finding her boss and friend murdered, she quickly becomes the prime suspect and is suspended from the force. There is clearly something not quite right and you straight away get the feeling she is being hung out to dry by some in the team that for whatever reason don’t like her and resent her being there. None of this sits well with her and despite everyone telling her to leave well alone she does some digging. Alongside this she is contacted by an old schoolfriend to see if she can find out what has happened to her younger sister who has gone missing. Hoping that this will be an easy job and a distraction whilst she is waiting to hear about her career she tackles her past head on in search of answers.

It is this investigation that provides some of the most action along with a dark and disturbing theme. Whilst at times unpleasant to read it is not in your face nor is there anything there purely for sensations sake. Throughout the book we get to learn more about Con, her background and her upbringing that really put her at odds with her chosen profession whilst at the same time making complete sense. I have to say that I really like her. She may be a bit prickly but there is just something that makes her the person you would want in your corner when things got tough.

Despite it being a change from the author’s main series there is a small nod to it that fans will get straight away in the form of one specific character and this familiar face brought a smile to mine as I was reading. The action, pace and interesting characters are something that I have come to love from James Oswald so much so that within 24 hrs I had read the whole thing with only that pesky thing called sleep preventing me from reaching for book number 2 straight away.

James Oswald is the author of the Sunday Times bestselling Inspector McLean series of detective mysteries. The first two of these, Natural Causes and The Book of Souls were both short-listed for the prestigious CWA Debut Dagger Award. Set in an Edinburgh not so different to the one we all know, Detective Inspector Tony McLean is the unlucky policeman who can see beneath the surface of ordinary criminal life to the dark, menacing evil that lurks beneath.

As J D Oswald, James has also written a classic fantasy series, The Ballad of Sir Benfro. Inspired by the language and folklore of Wales, it follows the adventures of a young dragon, Sir Benfro, in a land where his kind have been hunted near to extinction by men. The whole series is now available in print, ebook and audio formats.

James has pursued a varied career – from Wine Merchant to International Carriage Driving Course Builder via Call Centre Operative and professional Sheep Shit Sampler (true). He moved out of the caravan when Storm Gertrude blew the Dutch barn down on top of it, and now lives in a proper house with three dogs, two cats and a long-suffering partner. He farms Highland cows and Romney sheep by day, writes disturbing fiction by night.

One thought on “No Time To Cry by James Oswald”