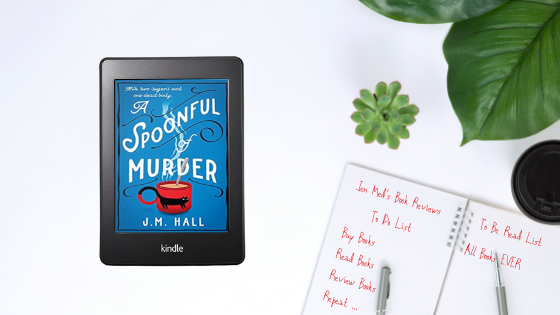 Today I’m sharing my thoughts on the brand new novel by J.M. Hall, A Spoonful of Murder. My thanks to publisher Avon for the advance copy for review. Here’s what it’s all about:

But one fateful week, as they are catching up with a slice of cake, they bump into their ex-colleague, Topsy.

By the next Thursday, Topsy’s dead.

The last thing Liz, Thelma and Pat imagined was that they would become involved in a murder.

Sit down with a cup of tea and this perfectly witty, page-turning cosy crime novel. Fans of Agatha Christie, Death in Paradise and Midsomer Murders will be hooked from the very first page.

I’ve actually been enjoying all the ‘cosy crime’ amateur sleuth types of books which have been released of late, particularly those where the protagonists are possible the least likely Detectives you might hope to meet. That’s certainly the case when it comes to Liz, Thelma and Pat, the three women who, in true Miss Marple style, find themselves in the midst of a case of murder. Or maybe not … It’s not entirely clear, especially given that the alleged victim, Topsy, a former colleague of the three women was in her dotage and suffering declining health. If it hadn’t been for the fact that Topsy was, in her day, a somewhat formidable character, they might have thought little of her sudden death. Well … that and her declaration that someone wanted her dead.

Now, as you can imagine, this is not a fast paced thriller, but it is a book that drew me in and kept me pondering about the who, the what and the why – heck even the if – of the alleged murder. Because the more the three women delve into the final days of their old friend Topsy, the clearer it becomes that there is something not quite right about the whole situation and the more certain I became that there was definitely something hinky in play. It doesn’t help that there are a whole host of suspect characters on the periphery of Topsy’s life and money is certainly a big factor for some.

I actually liked getting to know there three women, Liz, Pat and Thelma. They are three very different characters, all very carefully created and developed, each with characteristics that both endeared and, at times, frustrated me. Pat was perhaps the hardest to get to know, the most reticent in getting involved, but there was still something about her and I could recognise her fears and understand her reluctance to get involved, especially as there was potential trouble at home too. Liz seemed the most timid of the three but was actually very astute and perhaps, unknowingly, at the time, the most in tune with what was really happening. Thelma was the most direct about looking into what had really happened, the most determined to understand what was happening, driven to find an answer by her own faith. The story is told from all of their points of view, which serves to both enhance, and perhaps at times stall, our understanding, but the author gives believable and distinct voices to them making it easy to follow the changes in perspective.

J.M. Hall has woven a very clever and authentic feeling story. This is not really just about Topsy’s story, sad as it is. It is a study of the impact that age and declining health have on family, the way in which the deterioration of a previously sharp mind is one of the many fears that we all face as we advance in years. There is also a real sense of the way in which people may seek to take advantage of those who may naturally be more trusting, or perhaps just less aware, of the risks of modern life. Topsy is a victim in more ways than one, and each of those elements of her story serve to muddy the waters, and keep the truth of the whole story hidden until the very last moment. The list of potential suspects, assuming there is anything to suspect them of, is long, the motives equally so. The reveal, when it comes, is surprising, and yet fitting. Perhaps not satisfying, kind of sad actually, but in keeping with the nature of the book.

The audiobook of this is brilliantly narrated by Julie Hesmondhalgh, and can definitely be recommended. If captures the combination of hope, melancholy and humour that the story deserves, for there are as many moments that will make you smile and even laugh, as those that will leave you saddened by what comes to pass. I know that the three women, Liz, Thelma and Pat, were great characters, brought perfectly to life in the audio, and really good to spend time with. If you like a good cosy crime, with emotional and thoughtful undercurrent, this may well be the book for you.

J.M. Hall is an author, playwright and deputy head of a primary school. His plays have been produced in theatres across the UK as well as for radio, the most recent being Trust, starring Julie Hesmondhalgh on BBC Radio 4. His first novel, A Spoonful of Murder, is about retired primary school teachers who turn to sleuthing.

2 thoughts on “A Spoonful of Murder by J.M. Hall”