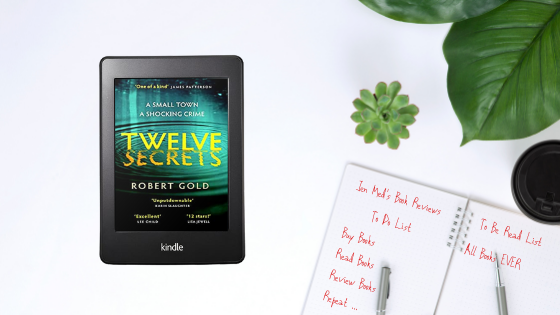 Today I’m sharing my thoughts on Twelve Secrets, the debut solo thriller from Robert Gold, and to wish the author a very happy publication day. This one certainly piqued my curiosity when I received a proof in a rather grand package from publisher Sphere and I’ve been looking forward to tucking in. Here’s what it’s about:

Ben Harper’s life changed forever the day his older brother Nick was murdered by two classmates. It was a crime that shocked the nation and catapulted Ben’s family and their idyllic hometown, Haddley, into the spotlight.

Twenty years on, Ben is one of the best investigative journalists in the country and settled back in Haddley, thanks to the support of its close-knit community. But then a fresh murder case shines new light on his brother’s death and throws suspicion on those closest to him.

Ben is about to discover that in Haddley no one is as they seem. Everyone has something to hide.

And someone will do anything to keep the truth buried . . .

Well this book took me completely by surprise. In a good way. a very good way. I’m not sure quite what I was expecting when I started reading, but what I found was a story that was compelling from the off, my interest well and truly piqued as we are introduced to journalist Ben Harper. It’s clear from the very beginning that his family history is not that of your run of the mill journalist, and when he is asked to produce a personal piece for his paper on the anniversary of his mother’s death, he agrees to do so, but only on his own terms. For Ben’s brother was murdered and his mother died in very difficult circumstances, but something inside of Ben is telling him there is far more to the story than the tragedy that the world has so far been told. And boy is there.

I really like the way in which the author has set up the story, and the narrative style he has taken. The lion’s share of the narrative is told in first person from Ben’s perspective, but to add weight and context to the story, there are scenes in a third person perspective where we meet the other main players in the story, people who Ben and his brother Nick grew up with and who had significant impact on their lives. The story is further broken down into twelve segments, headed by the ‘twelve secrets’ that follow key revelatory moments in Ben’s investigation. They act almost as a pause, a chance to allow those little clues to sink in and serve to heighten their importance in the story. It’s quite clever, the literary equivalent of an Eastenders post episode drum beat, driving home the surprise factor.

I really liked Ben as a character, and found him an easy person to spend time invested in, in spite of the dark nature of his past. You could really feel his conflict, the turmoil that being back in his hometown creates in him, and the secrets he uncovers about his mother and her past really do hit their mark. Pacing and tension in the book are spot on, but characters are key and Robert Gold has created a whole cast of people who felt authentic, if not always trustworthy. There is far more to the story than meets the eye, and the author does a brilliant job of keeping the truth just out of reach, introducing different people who clearly have less than honest intent and seem to muddy the water in terms of culpability over what comes to pass. I certainly didn’t foresee the ending, but when we got to the truth, it felt believable, and somewhat heart wrenching.

The book is packed with mystery, and a good deal of emotion, based around a story that could easily have been ripped from the headlines. Although never covered in a gratuitous way, the original case, the murder of Ben’s brother and his friend, is no less shocking and the repercussions are felt long after the victims have been laid to rest. A story of lies, misdirection and jealousy, this is one that stayed with me long after reading. Definitely recommended.

Originally from Harrogate in North Yorkshire, Robert Gold began his career as an intern at the American broadcaster CNN, based in Washington DC. He returned to Yorkshire to work for the retailer ASDA, becoming the chain’s nationwide book buyer. He now works in sales for a UK publishing company. Robert now lives in Putney and his new hometown served as the inspiration for the fictional town of Haddley in Twelve Secrets. In 2016, he co-authored three titles in James Patterson’s Bookshots series.