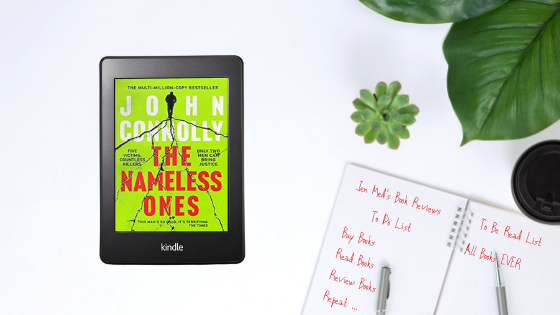 Today I’m sharing my thoughts on The Nameless Ones, the latest novel by John Connolly. I love the Charlie Parker series and Louis and Angel are two of my favourite characters, so I was intrigued to see what would happen when they are let loose in. their own story. Here’s what the book is all about:

In Amsterdam, three people are butchered in a canal house, their remains arranged around the crucified form of their patriarch, De Jaager: fixer, go-between, and confidante of the assassin named Louis. The men responsible for the murders are Serbian war criminals. They believe they can escape retribution by retreating to their homeland.
They are wrong.

For Louis has come to Europe to hunt them down: five killers to be found and punished before they can vanish into the east.
There is only one problem.
The sixth.

If you thought that a John Connolly Charlie Parker book without Parker would be light on the supernatural elements that have made this book so special, or that it may even go easy on the gore, think again. Whilst we may not have that added ‘something’, that air of uncertainty that surrounds Parker and all that he touches, but his daughter, Jennifer, who has long sought to protect and guide her father, seems to have a soft spot for his friends too. Haunting the dreams of both Louis and Angel, her presence in this book should probably be taken as a very bad omen. But just who it is bad for remains to be seen.

There is a definite change in tone with this book, with a story that focuses on the past of Louis and Angel. With action that moves between Europe and the USA, this is a tale of rival gangs, of murder and of retribution. It is dark in all the ways you would expect from a John Connolly novel, but it also has a melancholic and contemplative tone that sees our two protagonists thinking about their pasts, and their futures, ones in which their mortality is very much on their minds. Seeking revenge for an old friend, the tension is high and the stakes even higher. The narrative flows with the authors detailed, almost lyrical style, bringing to life the history of the characters, both central and those on the periphery, and creating a setting that is so vivid you almost feel a part of the action. There are scenes in which the levels of violence are quite intense, not gratuitous the way it appears on the page, but no less clear in its portrayal. It is brutal, it is, at times, stark, but it is almost necessary in terms of the story, and certainly in keeping with the very nature of the circles in which Louis and Angel operate.

Character is key in this book, and aside from our two anti-heroes, John Connolly has created a set of secondary characters who inspire loathing and a strange amount of empathy. In as much as one can feel empathy for people who operate on the wrong side of the law anyway. Many of the old favourites still appear, an ill fated attempt to harm Louis’ friends resulting in a well needed cameo from the Fulci’s. I love those guys. They are a really important part of the wider Parker family, and in spite of their imposing size, and often inept behaviour, they always bring a smile to my face. Then there. is Louis and Angel’s tenant and downstairs neighbour, Mrs Bondarchuck. She always makes me chuckle, so at odds with Angel and Louis in terms of personality, but so completely in tune with them too. Some surprising revelations on that front, let me tell you …

Then there is the ‘other’-ness of this story. Not just Jennifer but something more, something truly malign that is both obvious and hidden at the same time. A dark soul who is both terrifying and terrified, and that gives the bad guys that particular edge. It brings the archetypal John Connolly macabre to what could otherwise be a straightforward gang war. And believe me, this story is anything but straightforward.

This is a book packed with tension and aggression. It is a dark and twisted tale of revenge, family and friendship. It is brutal and unforgiving, there are scenes that will make you uncomfortable, and scenes that will make you smile as a sense of justice is played out on the page. We are brought closer to Louis and Angel than ever, privy to the love and understanding that exists between them, that may not always be expressed but that adds true emotional depth to our journey together. It’s another great story exploring the uneasy relationship between law and our duo’s inimitable brand of disorder. Yes, I missed Parker, but I loved the darkness and the edge that this story provided. It really hit the spot in filling that Parker void. Definitely recommended.

John Connolly is author of the Charlie Parker mysteries, The Book of Lost Things, the Samuel Johnson novels for young adults and, with his partner, Jennifer Ridyard, co-author of the Chronicles of the Invaders. John Connolly’s debut – EVERY DEAD THING – introduced the character of Private Investigator Charlie Parker, and swiftly launched him right into the front rank of thriller writers. All his subsequent novels have been Sunday Times bestsellers. He was the winner of the 2016 CWA Short Story Dagger for On the Anatomization of an Unknown Man (1637) by Frans Mier from NIGHT MUSIC: Nocturnes Vol 2.

In 2007 he was awarded the Irish Post Award for Literature. He was the first non-American writer to win the US Shamus award and the first Irish writer to win an Edgar award. BOOKS TO DIE FOR, which he edited with Declan Burke, was the winner of the 2013 Anthony, Agatha and Macavity awards for Best Non-Fiction work.

One thought on “The Nameless Ones by John Connolly”