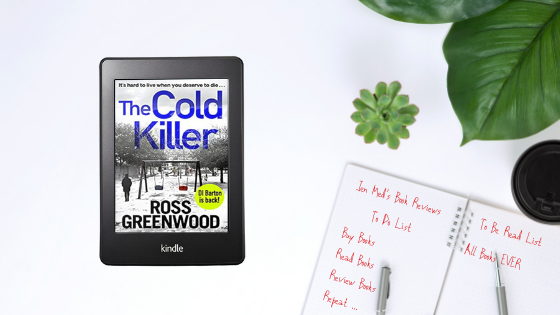 Today I am delighted to share my thoughts on The Cold Killer by Ross Greenwood, part of the DI Barton series. I’ve really enjoyed reading the other books in this series so it was great to be back with Barton and co on his latest case. My thanks to publisher Boldwood Books for the advance copy of review and to Rachel Gilbey of Rachel’s Random Resources for the blog tour invite. Here’s what the book is all about:

When a tired old inmate is found dead in his cell, the prison is obligated to investigate and so DI Barton attends. The men he interviews have been convicted of some of the worst things a human being can do, but it appears likely that the death was due to natural causes.

When the house of the dead man is burgled and that crime is followed by a suspicious fire, Barton desperately needs to speak to his widow, but she’s nowhere to be found.

In the space of twenty-four hours, everyone he wants to talk to has vanished. Then he receives some post which makes him believe he could be the next to disappear.

Barton’s investigation goes full circle, through a series of brutal murders, back to the prison, and all signs are pointing to the fact that he’s made a terrible mistake.

There’s a violent killer on the loose, who wants everyone to learn that some people deserve to die.

DI Barton is back as Ross Greenwood continues with his bestselling series, perfect for fans of Mark Billingham and Ian Rankin.

I’ve really enjoyed getting to know DI Barton and his team over the course of this series. Using his own knowledge of the justice system, and drawing that together with some very cunning bad guys and some rather inventive methods of dispatch, Ross Greenwood has created a series that entertains and amuses, as well as packing each of the stories with a blend of character, mystery and, as in the case of this book, true emotion. With The Cold Killer, not only are we treated to a rather memorable opening scene, but also a story which, for Barton amongst others, is a real blend of the professional and the personal. This is a story of family – both the good and the bad – but it is most definitely the bad that dominates and gives the book that real edge.

As ever with this series, a number of the scenes are told in first person perspective from the point of view of one of the books key antagonists. It is fair to say that there is no love lost between this person and DI Barton, but as you might expect, this voice remains anonymous for a very long time. Nothing unusual in that. Most mystery or thriller books like to keep the ‘bad guy’ a secret. But there’s a slight twist in this tale. The list of suspects really is finite. And already behind bars. A large proportion of the story takes place in prison, where any number of people could have cause to hate Barton, but to hate their fellow inmates more. It adds an interesting element of mystery to the story. The killer – or killers perhaps – remain in plain sight throughout, but even though we are travelling through the narrative from their perspective, we still don’t have a clear view of who they are, or what they may be capable of. Strangely perhaps, I actually found myself drawn to them, and although faced with flashes of anger, they were far more sympathetic as a character than you might expect, and the more I learned of them, the more I felt I understood their actions.

I really do like the character of DI Barton and his team, principally his Sergeants, Shawn Zander and Kelly Strange. They work really well together, mostly, a brilliant unit that fire off each others ideas and you get a great sense of authenticity from them. The banter that flows between them serves well to offset some of the tension of the investigation and with a number of the key suspects already known to the team, you know it’s going to be a challenge to identify exactly whodunnit. But for all the professionalism and banter, there is a more serious side to this story for Barton, with the author exploring a topic surrounding Barton’s family which is very relevant and which a number of readers will no doubt identify with, as he deals with his mother’s rapidly declining health.

The motives for murder in this novel are made clear quite early on, and the investigation touches on some very dark subjects that are handled in a way which is careful and respectful to victims of such violence and abuse. Part of the story takes place in a secure unit within the prison that houses the men. convicted of sexual offences, so it is fair to say that it is hard to be sympathetic in any way towards the victims. It also makes the potential list of suspects is vast, from victims to extended families, to people who simply take offence to the crime itself. There is a kind of hierarchy of crime within the prison, and it is safe to say these men are isolated from the rest of the population for a reason. But even with the care taken by the author not to graphically or gratuitously present the violence, there were scenes in which the casual and unapologetic nature of the abusers really made the skin crawl and the anger bubble. Not enough to turn you away from the page, more to draw you deeper in, waiting to see how far down the payback checklist the killer is able to get.

Fast paced, packed with tension and with brilliant characters I have really found myself increasingly attached to, I love the feeling of authenticity from these books, and the sense of mystery that keeps be guessing right to the very last page. This book isn’t just about revenge. There is a sense of redemption and of new beginnings, as well as some sad farewells. Most of all it was thoroughly entertaining, making me smile and scowl in equal measure. If you are looking for some great Detective fiction for your next read, that blends investigation with a killer perspective, then look no further. The DI Barton series is definitely recommended.

Ross Greenwood is the bestselling author of eight crime thrillers. Before becoming a full-time writer he was most recently a prison oﬃcer and so worked everyday with murderers, rapists and thieves for four years. He lives in Peterborough.

One thought on “The Cold Killer by Ross Greenwood”