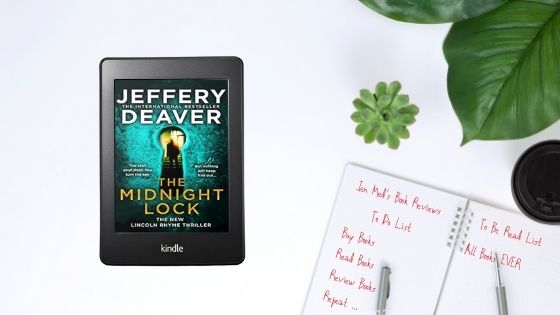 Today I am delighted to share my thoughts on The Midnight Lock by Jeffery Deaver and to wish the author a happy publication day. This is not technically the first Lincoln Rhyme story I’ve read, but it is my first full length novel, but then that’s my normal style so no surprise really … My thanks to publisher Harper Collins for providing an advance copy for review. Here’s what the book is all about:

A killer without limits
He comes into your home at night. He watches you as you sleep. He waits.

A city in turmoil
He calls himself ‘The Locksmith’. No door can keep him out. No security system can catch him. And now he’s about to kill.

A race against time to stop him
Nobody in New York is safe. Now it’s up to Lincoln Rhyme to untangle the web of evidence and catch him.

But with Lincoln under investigation himself, and tension in the city at boiling point, time is running out…

Well this was fun. Fun in a completely unnerving, check all the locks and try not to think about the completely freaky and unsettling notion of home invasion kind of way. With The Midnight Lock, Jeffery Deaver has created a tense, mystery laden story in which nothing is as it appears and deception and treachery seem to be the name of the game.

From the very start of this book I had a kind of creeping sensation working it’s way up my spine. There is nothing immediately obvious – no singular event or grotesquely obvious act of violence that triggered it. In fact it is exactly the opposite. It’s almost mundane in fact, until the realisation of what you are reading starts to set in. The implications. The sense of threat which is understated and yet overwhelming, culminating in a scenario that has the pulse pounding without anyone having to take a step. It’s extremely effective and the after effects … well surprising. This is the story of The Locksmith, a perpetrator who is capable of ruining everything their victims hold dear in just the simplest of touches. That’s not to say that there isn’t a threat to life, but somehow what he does is … worse.

Although I have come to this series extremely late, there was nothing to fear in picking up with book and running with it. I was familiar with the characters (I’ve not been living in a hole for the past few decades and I have seen The Bone Collector film) and although there are a few differences, as you’d expect, the essence of who Lincoln Rhyme is was easy to adapt to and settle into. And Jeffery Deaver is such an accomplished writer, able to give enough background to provide context, that it felt familiar in spite of this being my first full length title. I will admit it was a little strange coming to a story where the central character, renowned for acting as a consultant to the NYPD, has been prevented from doing exactly that by an act of political one upmanship, but intriguing to see how they might overcome this particularly large obstacle to their progress.

The aspects of this case – of home invasion, stalking, potential threat to life – really do make for a heady mix. Add into this a threat to Rhyme and Amelia linked to the case that has potentially cost Rhyme his vocation, and there is an ever present need to be alert, for both the characters and the reader. Interspersed with the main investigation there are scenes from The Locksmith’s point of view, scenes that give context to his behaviour, but also add to the creepiness of the character. The story looks long and hard at the propensity of people to live their lives on line, of the Influencers who invite people directly into their homes and make it easy for the voyeur. Not only this but it takes a look at the darker side of the web, of video hosting sites and the kinds of depravity that can be found if you really want to look. These scenes made for fascinating reading as they really add weight to the idea of the Locksmith as the puppeteer, and also the complexity and juxtaposition of his character. There is also a lot of information which made me think long and hard about the locks on all my doors and whether or not I need a full security overhaul.

Characters are key in this book, and aside from the very unsavory Locksmith, there are a number of other peripheral characters who add context and colour to the narrative. The tend to inform, but also misdirect the story, and add to the tension and mystery that permeates the novel. Lincoln Rhyme is a brilliant character, very astute and very capable, so seeing him wrestling with the potential end to his career is a revelation. But I do love the character of Amelia Sachs. She is so strong, so aware and so logical that she does make the perfect partner for Rhyme. She is alert to everything around her and it’s great seeing her little game plays to keep Rhyme in the loop despite the potential threat to her own career as a result. Then there is Lyle Spencer a truly multifaceted character, I really grew to like him very quickly and I’m intrigued, given how the story ended, to see how he might be developed in the future.

For my first proper taste of the Lincoln Rhyme series, I really loved this thriller and can’t wait to work my way through the back catalogue and whatever lovely new thrillers Mr Deaver decides to send our way. Recommended.

Jeffery Deaver is the No.1 international bestselling author of more than thirty novels, three collections of short stories, and a nonfiction law book. His books are sold in 150 countries and translated into 25 languages. His first novel featuring Lincoln Rhyme, The Bone Collector, was made into a major motion picture starring Denzel Washington and Angelina Jolie. He’s received or been shortlisted for a number of awards around the world. A former journalist, folksinger, and attorney, he was born outside of Chicago and has a bachelor of journalism degree from the University of Missouri and a law degree from Fordham University.

This week Mandie paid a visit to Will Carver's The Beresford? Will she ever recover?
Over on the blog I've been sharing my thoughts on Psychopaths Anonymous by the inimitable Will Carver.
This week saw the release of The Midnight Lock by Jeffery Deaver and I shared my thoughts over on the blog.
Today I joined the blog tour for one of my favourite series, the Dempsey/Devlin series by Tony Kent, with a review of No Way To Die.
Today I’ve been sharing my thoughts on Dead Mercy, the latest Maggie Jamieson book from Noelle Holten.
I reviewed something a little different this. week - Mark Tilbury's Poetic Justice.