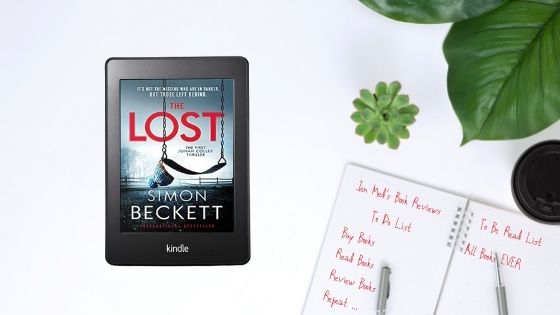 Today it is my pleasure to join the blog tour for The Lost, the latest thriller from author Simon Beckett. I love a good police thriller and having read the blurb for this one it sounded eight up my street. My thanks to publisher for the early review copy vie Netgalley and Tracy Fenton of Compulsive Readers for the tour invite. Here’s what the book is all about:

A plea for help from an old friend leads Jonah to Slaughter Quay, and the discovery of four bodies. Brutally attacked and left for dead, he is the only survivor.

A SEARCH FOR THE TRUTH

Under suspicion himself, he uncovers a network of secrets and lies about the people he thought he knew – forcing him to question what really happened all those years ago…

True to form, I’ve never read any of Simon Beckett’s work before, but I’d been assured that his writing was great by a few of my fellow bloggers and, having devoured The Lost, I can very much see what they mean. This book drew me in from the very beginning, and led me on a journey littered with peril, jeopardy, double crossing and some very heightened emotions. Talk about being at the edge of my seat. As they story progressed, and the pacing picked up, I could feel my reading speed pick up with it, as well as the compulsion to race to the end of the book, whilst trying to savour and eek out the conclusion of this very addictive tale. It was a book where I absolutely needed to know what happened, but also absolutely didn’t want it to end. That’s got to be good, right?

This is a book which has two very separate, and yet most definitely intertwined storylines. First up we have the very present day, very high stakes, mystery that Jonah Colley finds himself embroiled in. The scenes near the start of the novel are really tense, nerve jangling stuff and set the tone for all that will follow. But in amongst this we have the very emotional story of Jonah’s past, a past which informs the person he is today, and, to a degree, the course of the investigation he is about to find himself at the centre of. Only it’s not a comfortable position he is in as he isn’t the man investigating – he’s the suspect.

There is a darkness about this story, and an ever present tension which kept me completely riveted. I loved the way in which Simon Beckett has developed Jonah’s character, the regret that haunts him but which he is able to turn to his advantage. As readers we do have a certain knowledge that the police do not, present as we are when the real action kicks off near the start of the book, but we certainly don’t have the whole picture and the author maintains that mystery, and the suspense, right to the last page. It’s a very twisted story, with some dark themes and some very gruesome murders to boot, but not so dark that it alienates the readers. Simon Beckett has definitely not left us as readers with the warm and fuzzies, but he hasn’t exaggerated the violence or made the story too graphic. It is just enough to keep the tempo high and make me, as the reader, start to lean further into my kindle with every turn of the page.

There is a real depth of emotion to the book too when we are faced with Jonah’s grief, and guilt, over the disappearance of his son. The scenes are hard hitting and effective and I liked the way that it is woven into the core of the book rather than being a simple then and now scenario. It is no wonder that he finds himself under suspicion as they whole tale is undercut by a. feeling of secrecy and subterfuge, a kind of deception and betrayal which is so carefully unveiled that the surprises just keep coming, the biggest of all saved for that pivotal, adrenalin filled and very dramatic showdown at the end of the book.

Well … nearly the end. Because, you see, this is just the start of our journey with Jonah Colley. This makes me quite happy. There is so much promise in the conclusion to this book. It is satisfying and yet intriguing. Full of perhaps as many questions as answers. Not about this current case. That is well and truly wrapped within this book, almost literally in fact. But I am left hungry for more and that is exactly what you want from a new series. Characters you are invested in and a story that makes you care. Nice job, Mr Beckett. Roll on book two.

Simon Beckett is the No.1 International Bestselling author of the David Hunter series. His books have been translated into 29 languages, appeared in the Sunday Times Top 10 bestseller lists and sold over 10 million copies worldwide. A former freelance journalist who has written for The Times, The Daily Telegraph, The Independent on Sunday and The Observer, the inspiration for the first David Hunter novel came after a visit to the world-renowned Body Farm in Tennessee introduced him to the work of forensic anthropologists.

As well as co-winning the Ripper Award in 2018/19, the largest European crime prize, Simon has won the Raymond Chandler Society’s ‘Marlowe’ Award and been short-listed for the CWA Gold Dagger, CWA Dagger in the Library and Theakston’s Crime Novel of the Year.

In addition to the six David Hunter titles, the most recent of which is The Scent of Death, he has written five standalone novels, one of which, Where There’s Smoke, was adapted into a major ITV two-part drama.

One thought on “The Lost by Simon Beckett”