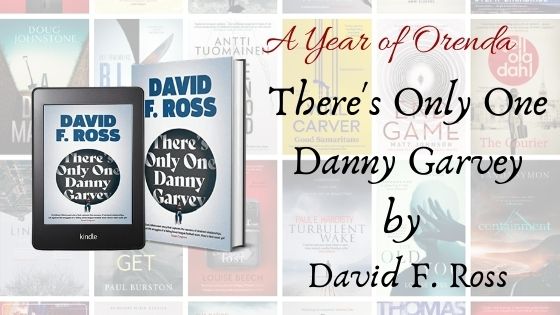 Today I am delighted to finally share my thoughts on There’s Only One Danny Garvey, the latest offering from David F. Ross. I was very late in reading the author’s Disco Days trilogy but absolutely loved it, and was so happy when it was announced that he had once again teamed with Orenda for this latest offering. Now, in true Jen style, I didn’t read the blurb before ordering, possibly for the best in this case, but then I love going into a story blind. It makes going on the journey that bit more special and this is one book you really don’t want to miss. Here’s what it’s all about.

Danny Garvey was a sixteen-year old footballing prodigy. Professional clubs clamoured to sign him, and a glittering future beckoned.

And yet, his early promise remained unfulfilled, and Danny is back home in the tiny village of Barshaw to manage the struggling junior team he once played for. What’s more, he’s hiding a secret about a tragic night, thirteen years earlier, that changed the course of several lives. There’s only one Danny Garvey, they once chanted … and that’s the problem.

A story of irrational hopes and fevered dreams – of unstoppable passion and unflinching commitment in the face of defeat – There’s Only One Danny Garvey is, above all, an unforgettable tale about finding hope and redemption in the most unexpected of places.

Ordinarily, if you put a book that was centred around football in front of me, I’d be off running in the opposite direction faster than you could say Ally McCoist. Now don’t judge me – that is literally one of my only Scottish football references other than good old Sir Alex F, and I probably only remembered him as he’s mentioned in the book. My knowledge of the sport extends no further than knowing Gary Lineker hails from Leicester (and has a seemingly unhealthy obsession with Walkers crisps and possibly a no compete clause in his contract that prevents him from extolling the virtues of the region’s other famous export, the Pukka Pie); Gazza cried at something footballish once; Vinnie Jones is better off as a Hollywood hard man; and Emlyn Hughes used to be a team captain in A Question of Sport opposite Bill Beaumont. To say I have no interest in the sport really would be a gross understatement of how underwhelmed I am about the thought of watching 22 grown men chasing around a patch of grass, trying to catch up with a bag of wind. To be fair to me, McCoist isn’t too bad a reference for a non-footballer given he was still around (just) at the time the book was set and saw out his career playing for Kilmarnock-Nil, in the very county where the book is set.

Impressed with that punditry? Yes. I can Google!

But that’s about all you are going to get from me football wise because, in fairness, it means not a lot to me and possibly even less than that. So, you might be surprised to hear that I absolutely loved this book. If, like me, the sport leaves you cold, do not fear. This book is about so much more than football. I mean, yes, the sport is prominent – in simple terms it is about a Pro-footballer whose career was cut short prematurely by injury and who, after a few years and a few diversions, ends up back at his home team clubhouse, trying to get them into winning form after what can only be classed as a very disastrous season the year before. To say that Barshaw Bridge FC are the underdogs is an understatement, and some very unethical behaviour from the former Manager has left them with a lot of ground to make up. Not only are they one of the least organised or motivated teams (barely) in the league, they face an uphill battle to get off the bottom of the table too. Very uphill. In much the same way that the summit of Everest is ‘uphill’. It’s that bad. And the team Danny has to work with, a bunch of characters that I would say will resonate with more than a few readers, add a lot of, how should I put it, colour to the story. Colour and ‘passion’. This is minor league football in the nineties. It writes its own headlines.

Now the eponymous Danny Garvey is a very interesting character. The lion’s share of the story is told from his point of view from the point in time when his old friend and father figure from Barshaw, Higgy, arrives in Arbroath to try and convince him to return home to manage the Junior league team and to visit his dying mother. It’s clear from the off that Danny is reluctant to return, and for more reasons than the simple fact that, due to injury, his career as a pro footballer really didn’t pan out as he’d envisaged when he left all those years before. We don’t know why, quite what it is that Danny is afraid to return to, but his reticence seeps from the page and infuses the narrative with a real sense of mystery. It’s a question that I needed answering – just what was he running from? There is a real sense of melancholy about Danny, and as much as he manages to coach the team toward eventual success, you know that the successes are offset by a slow breakdown in his personal fortune. You can almost see him shrinking on the page, and he is hardly the most forthright or gregarious of characters to begin with. He is a character I wanted to read more about, in spite of his, in my opinion, dubious choice of career, and David F. Ross has captured his attempts at atonement perfectly. You always feel like he is trying to do the right thing, but will he succeed?

Danny’s story is interspersed with passages from the point of view of several other characters. First and foremost there is Higgy, then Nancy, who is his brother, Raymond’s partner, and their son, Damo and last but definitely not least, Raymond. Each one adds a new layer, a new kind of texture to the story, adding emotion, surprises, moments to make you smile, but more than a few comments and observations that will make you question what you thought you knew. Each of them in their own right are very important to Danny, all informing who he was, who he has become or who he is yet to be, and what we learn about him through his interactions with them, adds another dimension to the story. Perhaps the most touching parts of the book come from Danny’s interactions with Higgy, but more importantly Damo. Damo has characteristics and behaviours that, at the time, were very misunderstood, and Danny’s attempts to understand his nephew better only increased how much affinity I had towards him as a character.

This is a very hard book to discuss without giving away the central themes. In essence it is the story of a man who helps lead an underperforming team to potential success. It’s also about post match fights, sausage rolls and pints down the pub. But it is far more than that too. There are backstories which feed throughout the narrative, and that continue to build on that sense of melancholy that we ultimately draw from Danny. And yet for every moment of sadness I encountered, I found a moment of humour to match or offset it. David F. Ross is a beautiful writer who captures emotion perfectly, whether we are at the heart of a match day brawl, that moment of excitement where players are faced with a make or break penalty, or those fractions of calm where we are simply faced with Danny and his recollection of the past.

This is a story of loyalty, family, of past transgressions and of atonement. It explores the fragility of both mind and body; a story of hope but also of ultimate sadness. But above all else, it is a book which had me absolutely enthralled from the off, beautiful narrative in which even the more difficult elements are handled with care and understanding and that has a real capacity to surprise me. So yes, I’m very glad I didn’t read the blurb. I’d have likely dismissed it as ‘just’ a football book and gone into it with entirely the wrong mindset. I’m very glad I read it. I know that Danny, Higgy and Damo especially are going to stay with me for quite some time. Highly recommended. And it’s getting one of these. In spite of the football.

David F. Ross was born in Glasgow in 1964 and has lived in Kilmarnock for over thirty years. He is a graduate of the Mackintosh School of Architecture at Glasgow School of Art, an architect by day, and a hilarious social media commentator, author and enabler by night. His most prized possession is a signed Joe Strummer LP. Since the publication of his debut novel The Last Days of Disco, he’s become something of a media celebrity in Scotland, with a signed copy of his book going for £500 at auction, and the German edition has not left the bestseller list since it was published.

One thought on “A(nother) Year of Orenda – There’s Only One Danny Garvey by David F. Ross”