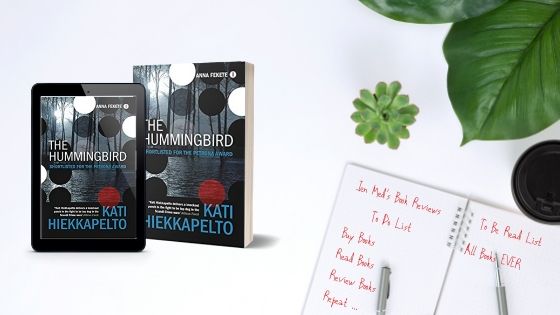 Mandie is starting her journey into the world of Anna Fekete with her review of The Hummingbird, book one in the series I shared my thought last year and you can find out how much I enjoyed it by reading my review. Here’s what the book is all about.

Anna Fekete, who fled the Yugoslavian wars as a child, has a past.

Just beginning her career as a criminal investigator in a northern Finnish coastal town, she is thrust into a high-profile, seemingly unsolvable case that has riveted the nation. It doesn’t help that her middle-aged new partner, Esko, doesn’t bother hiding his racist prejudices, and Anna becomes the target of a systematic campaign to unsettle her.

A young woman has been killed on a running trail, and a pendant depicting an Aztec god has been found in her possession. Another murder soon follows. All signs point to a serial killer, but can Anna catch the Hummingbird before he – or she – strikes again? And at what personal cost? Dark, gritty and filled with contemporary themes, this is a chilling, unforgettable book that you will find impossible to put down. Or forget.

The Hummingbird is the first in the series of books about Senior Detective Constable Anna Fekete. Just starting out in a new job with a partner who has serious issues about working with her, she soon finds herself involved in the case of a young woman who is shot to death on a popular jogging route. When a second person is murdered the whole team is left struggling to find the connections. Added to this Anna is worried about a young girl who had initially phoned the police in fear of her life to only backtrack on her statement when they dig deeper. Is it just a case of a child rebelling against her parents as they said or is it something worse?

Anna certainly has her work cut out for her, dealing with the case and her partner Esko. Trying to work out where she fits in with the team, she is naturally a loner that does not make friends easily. The constant put downs and comments from Esko are not helping but she has decided for the main to ignore him. Despite the murders taking priority and an instruction from her boss to shut down any further investigations into the young girl, Anna just can’t let go and takes it upon herself to keep watch on the family even though it is clearly impacting on her health and at times her job. Added to this is her prickly relationship with her brother which at times has you wondering just what will give first.

Anna is certainly a character that takes time to warm to but as you learn more about her past you can see to an extent why she is the way she is as many of her actions are borne from self-preservation and building up a shield over the years. Her colleagues all seem to have their own issues to deal with which make their whole dynamic slightly off kilter and you wonder if they will ever come together as a team.

With the investigations being complex, in part due to there being no real clues or motives and any suspects they have being very evasive and withholding information The Hummingbird will keep you guessing as to the who and why to the end. This is one series I am looking forward to reading more of and hopefully getting to understand Anna just that little bit more and who knows find that Esko is really not as bad as he seems. With a fantastic setting I am truly falling in love with translated fiction.

Kati Hiekkapelto was born in 1970 in Oulu, Finland. She wrote her first stories at the age of two and recorded them on cassette tapes. Kati has studied Fine Arts in Liminka Art School and Special Education at the University of Jyväskylä. The subject of her final thesis/dissertation was racist bullying in Finnish schools. She went on to work as a special-needs teacher for immigrant children. Today Kati is an international crime writer, punk singer and performance artist. Her books, The Hummingbird and The Defenceless have been translated into ten languages. The Hummingbird was shortlisted for the Petrona Award in the UK in 2015 and The Defenceless won the prize for the best Finnish Crime Novel of the Year 2014, and has been shortlisted for the prestigious Glass Key. She lives and writes in her 200-year-old farmhouse in Hailuoto, an island in the Gulf of Bothnia, North Finland. In her free time she rehearses with her band, runs, hunts, picks berries and mushrooms, and gardens. During long, dark winter months she chops wood to heat her house, shovels snow and skis. Writing seems fairly easy, after all that.

One thought on “The Hummingbird by Kati Hiekkapelto (trns David Hackston)”