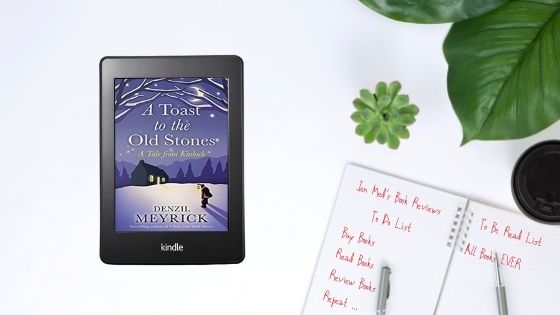 It’s time to wish a very happy publication today as A Toast To The Old Stones by Denzil Meyrick, is out in the wild, continuing the adventures of a young Hamish and his skipper, Sandy Hoynes. A huge thank you to publisher Polygon, who sent me an advance copy of the book for review. Here’s what the book is all about:

It’s 1968, and the fishermen of Kinloch are preparing to celebrate the old New Year on the twelfth of January. The annual pilgrimage to the Auld Stones is a tradition that goes back beyond memory, and young Hamish, first mate on the Girl Maggie, is chuffed that he’s been invited to this exclusive gathering – usually reserved for the most senior members of Kinloch’s fishing community.

Meanwhile, it appears that the new owners of the Firdale Hotel are intent upon turning their customers teetotal, such is the exorbitant price they are charging for whisky. Wily skipper Sandy Hoynes comes up with a plan to deliver the spirit to the thirsty villagers at a price they can afford through his connections with a local still-man.

But when the Revenue are tipped off, it looks as though Hoynes and Hamish’s mercy mission might run aground. Can the power of the Auld Stones come to their rescue, and is the reappearance of a face from Hoynes’ past a sign for good or ill?

The Tales From Kinloch novellas may be, at 150 pages, pretty quick reads, but boy do they leave their mark. Containing all of the trade mark humour that you might expect from Denzil Meyrick, albeit a little less dark in tone the the DCI Daley series, they also have the essence of some of the best folk tales, of the kind of tall tales that you might expect to hear Hamish recounting beside the bar in the County. But this is not just Hamish’s story – this is more about his skipper and mentor, Sandy Hoynes, and their adventures aboard their fishing boat, the Girl Maggie.

A Toast To The Old Stones is set just a few weeks after the ill fated trip that Hoynes and Hamish took when they tried to battle the elements to bring supplies to the good folk of Kinloch. It appears both have recovered from their strange adventure, although there are parts of that tale that many of their peers will not let lie, possibly because Hoynes is renowned for bend the truth as far as a fishing rod. In this caper, Hamish is invited for the very first time, to take a special trip to honour the memory of their forefathers and early settlers of the region, an annual tradition which will turn into an eventful and truly memorable trip.

What I love about these novellas is that they are so rich in imagery and steeped in the history of the town, and of the region, in terms of the shared heritage with the vikings of yore. The early chapters of this book really set us up as readers for what will follow, establishing the history of the stones, but also of Sandy Hoynes and showing us a little of his childhood and the passing down of knowledge and experience from generation to generation. The language is almost lyrical at times, so beautiful and evocative, that it really drew me into the story. It is one of those tales that conjures images of Kinloch of years past, part legend, part misadventure, the kind I’d expect to read curled up beside a warm fire on a cold winter’s eve.

There are moments of tranquility, a kind of otherworldliness, that pepper the story, but these are bolstered by the humour and banter that occurs between the fishermen and keeps the tale fresh. Add into the story a kind of cat and mouse game between Hoynes and the Revenue Collector who is hot on his heels and you have a story which is guaranteed to entertain.

I am loving this series, and loving getting to see another side to Kinloch, its residents and its history. Funny, beautiful, and captuirng the spirit of the seafaring community of Kinloch, it is most definitely recommended.

Denzil Meyrick was educated in Argyll, then after studying politics, joined Strathclyde Police, serving in Glasgow. After being injured and developing back problems, he entered the business world, and has operated in many diverse roles, including director of a large engineering company and distillery manager, as well as owning a number of his own companies, such as a public bar and sales and marketing company. Denzil has also worked as a freelance journalist in both print and on radio.