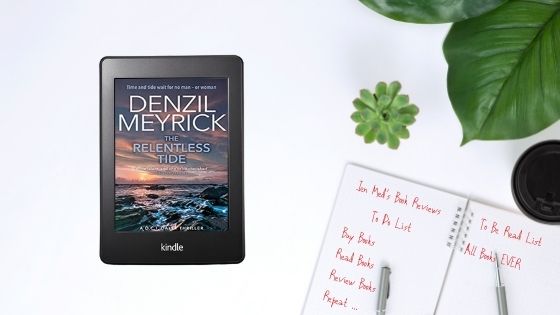 My DCI Daley series catch up continue with a review of The Relentless Tide by Denzil Meyrick. Here’s what the book is all about:

When Professor Francombe and her team of archaeologists find the remains of three women on a remote Kintyre hillside – a site rumoured to have been the base of Viking warlord Somerled – their delight soon turns to horror when they realise the women tragically met their end little more than two decades ago. It soon becomes clear that these are the three missing victims of the ‘Midweek Murderer’, a serial killer who was at work in Glasgow in the early 1990s.

DCI Jim Daley now has the chance to put things right – to confront a nightmare from his past and solve a crime he failed to as a young detective. However, when Police Scotland’s Cold Case Unit arrive, they bring yet more ghosts to Kinloch.

A tale of death, betrayal, Viking treasure and revenge set in the thin places where past, present and future collide.

What I love about this series is that every single book brings us something completely new. Yes, the central characters may be the same, Daley, Scott, Hamish, Annie and all of the other wonderful folk who inhabit the shores of Kinloch, but each story is fresh, unique and absolutely enthralling. Brilliantly moving between past and present, this time around Denzil Meyrick brings us a story which spans the decades and brings a very uncomfortable truth to light. It’s tense, it’s emotional. It just bloody good storytelling.

Beginning with the discovery of the remains of three women, and taking readers through an investigation which is as personal for Daley as it is the family of the three victims, this is a story which is fraught with tension and conflict and with so many twists and turns that it’s hard to see quite where the author is leading us. We get a flavour of what is to come from the opening scenes, dramatic and emotional as they are but, as always, Denzil Meyrick takes his time in building the bigger picture, in showing readers just how this fits into the new/old case that Daley is investigating. Add into the mix a very present threat against a local nurse which seeks to distract the team from the implications of the cold case and once again the author serves up a tale which had me on the edge of my seat, or at the very least, speeding up on my morning walk.

I’ve said it before and I’ll say it again, I do love these characters. Daley and Scott are the perfect crime fighting pair, contrasting but complimenting each other no end. Throughout this book we get to learn more about Daley and his former mentor, Ian Burns, about something that happened that would come to haunt and inform Daley’s life. It’s a kind of emotional encounter, but one which explains some of the conflict from earlier books and made me like Daley more. His dedication to justice and to finding the truth are what really drive these stories, never more so than in this book. And Scott, ever faithful and by. his friends side, provide the light relief, as and when it comes, his skilful, or is that tactless, way of putting his foot in it time and again, bring more than the occasional smile to my face.

Ever evocative in tone, language and imagery, this is a book which really taps into a dark subject but in a careful and not gratuitous way. Conspiracy and murder are at the heart of this tale, but with so many layers making up the picture that much of the truth lies hidden in plain sight right until the end. It is a dark and sombre story, but with some lighter moments provided by the arrival of James Daley Junior and his strange blossoming friendship with Hamish, not the most natural or expected of babysitters of course, but it is one I really enjoyed. I liked the mystery, the tension, this sense of history and the strong vein of humour. Another brilliant tale excellently told.

Denzil Meyrick was educated in Argyll, then after studying politics, joined Strathclyde Police, serving in Glasgow. After being injured and developing back problems, he entered the business world, and has operated in many diverse roles, including director of a large engineering company and distillery manager, as well as owning a number of his own companies, such as a public bar and sales and marketing company. Denzil has also worked as a freelance journalist in both print and on radio.

4 thoughts on “The Relentless Tide by Denzil Meyrick”