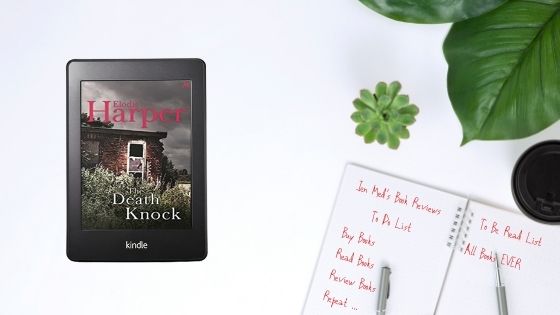 I am somewhat embarrassed by how long this book has sat languishing on my tbr pile. I loved the haunting and atmospheric nature of the author’s previous novel, The Binding Song and so have been really looking forward to reading this. Here’s what it’s all about:

Ava knows the threat is real. She’s been kidnapped by a stranger who seems to know everything about her. Now she must fight both to stay alive and to stay sane.

As Frankie follows the case, she enters a terrifying online world where men’s rage against women has turned murderous – and where her persistence will make her a target.

The Death Knock is a compelling story of the hunt for the truth – at all costs.

The Death Knock is a chilling tale of misogyny, murder and mystery that follows two women, reporter, Frankie and student, Ava, who are two very different sides of the story. Ava is the latest victim of the man being dubbed. the Norfolk Strangler, Frankie the person who is determined to get to the bottom of the story.

This is, on the surface, a murder mystery, several women from different backgrounds, found murdered and discarded around East Anglia with seemingly no connection between them. Two are street workers, the other a young hairdresser. It is only when the police, and Frankie, examine the cases more closely that the connections begin to appear. When Ava, a psychology student goes missing, Frankie follows the trail to a dark and dangerous website in which the hatred for women is strong and the vilification of them by men who deem themselves to have been wronged is laid out for all to see.

There are some very tense moments in this story. As we follow Frankie’s investigation there is an overwhelming sense of threat and suspicion at every turn. The author takes readers to some very dark places, looking into the possible motivations of the perpetrator for murdering the women. Then when we spend time with Ava you can feel the fear growing with every page turn, the scenes between her and her captor creating chills that run deep. The violence is muted, nothing overly graphic, the threat undeniable and the way in which the killer worms himself into Ava’s thoughts, her internal battle to stay strong and survive acutely observed. This is a much a story of the psychology of survival as it is of the blame culture that certain men have towards women when it is their violence and anger which brings about their own demise.

It is a story that could be ripped from the headlines, the author’s own experience in media giving credibility and edge to the action. I really liked the way in which Elodie Harper has developed the two women, how she has shown their strength in adversity, and how she has managed to bring to the page several really strong female characters. In spite of this, this is not a tale of men v women. It is a balanced story in which characters on both sides of the gender divide demonstrate that neither sex is entirely virtuous when it comes to character behaviours. An engrossing and tense read.

Elodie Harper is a journalist and prize winning short story writer. Her story ‘Wild Swimming’ won the Guardian-Hodder The Bazaar of Bad Dreams story competition as judged by Stephen King. She is currently a reporter and presenter at ITV News Anglia, and before that worked as a producer for Channel 4 News.

3 thoughts on “The Death Knock by Elodie Harper”