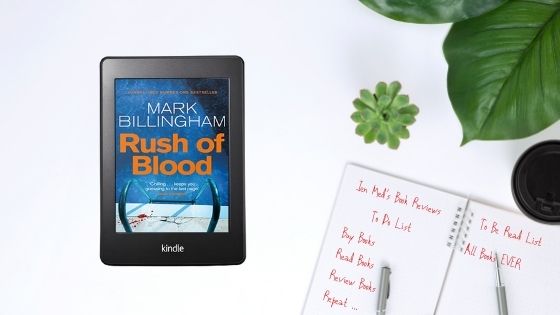 At the start of this year I decided to spend my time playing catch up on my reading backlist, and of of my catch up reads, or in this case listens, was Rush of Blood by Mark Billingham. Here’s what it’s all about:

Three couples meet around the pool on their Florida holiday and become fast friends. But on their last night, their perfect holiday takes a tragic twist: the teenage daughter of another holidaymaker goes missing, and her body is later found floating in the mangroves. When the shocked couples return home, they remain in contact, and over the course of three increasingly fraught dinner parties, they come to know one another better. But they don’t always like what they find: buried beneath these apparently normal exteriors are some dark secrets, hidden kinks, ugly vices…. Then, a second girl goes missing. Could it be that one of these six has a secret far darker than anybody can imagine?

A brilliantly plotted, utterly gripping thriller about the danger of making friends on holiday, Rush of Blood is Mark Billingham’s most ambitious and accomplished work to date. Specially adapted for audio by the author.

It’s not often I read to the end of a book where I struggle to find any redeeming qualities among any of the lead characters, but that is exactly the case here and, in reality, exactly the point. This is the story of three very, very different couples who meet on a holiday to Florida and who form a kind of holiday friendship that follows them home to the UK. So far so normal, and if this was simply a case of three odd couples finding themselves drawn into increasingly uncomfortable dinner parties, it would be a rather strange crime thriller. Unfortunately, their dream vacation was interrupted by the disappearance of a young girl, Amber-Marie who had also been staying at their resort, and this case follows them home, leaving readers in absolutely no doubt that at least one of the six knows more about the girl than they are admitting.

Mark Billingham has a knack for creating unforgettable and, in this case unlikeable, characters who really draw you into the story. The six individuals in this book, Angie and Barry, Marina and Dave, and Susan and Ed, are very different, not really the kinds of people you could imagine mixing if it were not for the typical energy of an overseas holiday. I didn’t particularly warm to any of them, and it made for an interesting experience as the finger of suspicion should easily fall to any one of them in turn, especially the men. One a liar, one a very angry man and one who has far too much interest in the way the investigation seems to be going. Then again, the same could be said of Angie, who just tried too hard to be accepted, and Susan and Marina who are nursing their own demons. They are all damaged in their own way, each potentially capable of darkness, and it is these elements of their personalities which the author explores, pulling us into their minds and making each one more suspect in turn.

It is not just the suspects we get to learn about in this book, the author also exploring the impact of Amber-Marie’s disappearance on her mother, Patti Lee, and the emotional toll that the case has on both her and the lead Detective in Florida, Detective Jeffrey Gardner. As a father, he struggles with the emotion of the case, imagining how he would feel if the same fate should befall his daughter, and it is easy to see how any parent might be invested in the case and in this story. It wasn’t overwhelming in terms of evoking a reaction, perhaps because I’m not a parent, but the impact felt real, felt believable, and added a layer of urgency to the story as a whole, even if Patti Lee was also not entirely sympathetic as a character. In fact the only one I really felt for was Amber-Marie.

The story is told in three parts, focusing on each couple in turn as it is there time to host a dinner party, reuniting the six. Mixed in amongst these increasingly fractious meetings, are scenes of the investigation which takes place across both sides of the Atlantic as a local Met Police Detective is drafted in to reinterview the couples. It draws focus back to the crux of the story, the disappearance of Amber-Marie, and opens the door to some scenes from the abductors point of view. The way in which the story is structured, slowly building the picture of the main suspects, at least in the reader’s eyes, and the victims – Amber-Marie and her mother – is really effective, building the suspicion and the tension until we reach a very shocking conclusion that left me smiling. Or as much as you can when murder is involved anyway.

With red-herrings littered throughout, elements of the author’s police thriller writing credentials in play, this is one mystery that kept me guessing to the end, and I really enjoyed it.

Mark Billingham has twice won the Theakston’s Old Peculier Award for Best Crime Novel, and has also won a Sherlock Award for the Best Detective created by a British writer. Each of the novels featuring Detective Inspector Tom Thorne has been a Sunday Times bestseller, and Sleepyhead and Scaredy Cat were made into a hit TV series on Sky 1 starring David Morrissey as Thorne. Mark lives in North London with his wife and two children.

One thought on “Rush of Blood by Mark Billingham”

Playing review catch up
Today I’m sharing my thoughts on The Last Time She Died by Zoë Sharp.
A big thank you to @headlinebooks for this #gifted #bookpost - a copy of Good Cop Bad Cop by @simon_kernick. Really looking forward to reading it for the @randomthingstours next month.
Treated myself to a new book this week - Billy Connolly’s Autobiography. Can’t wait to read it.
Today Mandie shared her thoughts on Facets of Death by @detectivekubu over on the blog.
Today I’m sharing my thoughts on The Lost Boy by @rachelamphlett