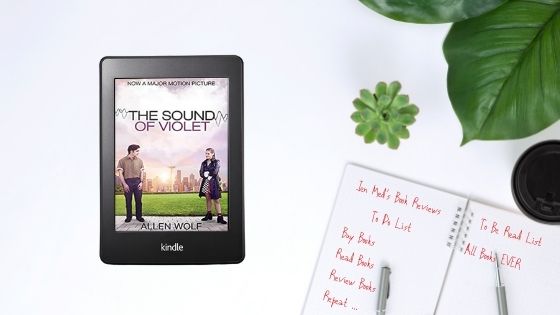 Today I’m sharing my thoughts on The Sound of Violet, the debut novel by Allen Wolf who has also written and directed the movie of the same name. My thanks to the author and Morning Star Publishing for the advance copy for review. Here’s what the book is all about:

Desperate to find a soulmate, Shawn goes on one awkward date after another until he encounters the alluring Violet. He starts dating her, but his autism keeps him from realizing that she’s actually a prostitute.

Shawn thinks he’s found a potential wife while Violet thinks she’s found her ticket to a brand new life. This hilarious and dramatic award-winning story has been adapted into a major motion picture.

The Sound of Violet is a story which is packed with humour, heart and a whole lot of poignancy. Focused around the character of Shawn, it follows his many unsuccessful attempts to find love. There is nothing particularly wrong with Shawn, he’s a personable chap and very fond of his family, and Gegarang coffee. He’s also autistic. This means he says exactly what he is thinking and misses many of the social cues that would appear obvious to other people. His honesty is refreshing, and never said with malice, but being on the receiving end on facial grooming tips, comments about height or a variety of other personal traits is never going to go down well, especially when offered to a woman … This means that when he meets Violet, he misses the most obvious fact of all about her lifestyle. She’s a prostitute and, to her, their first ‘date’ is just another job.

I really liked the character of Shawn. He is very intelligent, loves his computer programming and loves his Grandmother and church. There is something very wholesome about him. Allen Wolf has portrayed his nature perfectly, never painting his autism as a disability or using it for mirth, but bringing to life a very honest and likeable character that you cannot help but want to see find love. Violet is also a character I grew to like very quickly. She is quite sassy and although it may appear that she is using her friendship with Shawn for her own ends, it is clear that there is far more to her than her career may show. The more we learn of her past, and her present, the more sympathy you feel for her. You can see how the friendship grows, how it becomes something more, in spite of the many obstacles they have to face.

There are some very serious topics that run through this book. Not only does it seek to challenge the perception of people with autism but it also looks at the very serious subject of prostitution. Violet is not your simple Julia Roberts/Pretty Woman heroine who is going to be able to lead the perfect life with the perfect outfit and become the belle of the races. She is someone who has been forced into selling her body for another’s gain and that whole aspect of human trafficking and sexual slavery and grooming may only appear as a minor thread but it is still one that leaves an impression. Violet’s story is emotional and sensitively handled, but nonetheless hard to hear when it finally comes to light. There is a sense of threat but it is not so strong that it overshadows the beauty of her friendship with Shawn and the story overall.

One other element of the book that made me smile is the relationship between Shawn and his family. His grandmother is protective but ultimately working in Shawn’s best interests. I liked her, even if she was quick to judgment about Violet, recognising her very quickly for who she really was. Understandable given her position and her desire to see her grandson meet the right woman, but there is a real humanity there too which shows itself in an understated but undeniable way. Then there is Colin, Shawn’s brother. The banter between then, and the clear love their have for one another is heartwarming and infectious, and it brings a smile to the face quite easily. They are a little like chalk and cheese, Shawn driven whereas Colin as always stayed out of the spotlight that was cast upon his brother, and almost become a self fulfilling prophecy of underachievement.

This book has been adapted from the original screenplay and it does have that cinematic vibe to it. I can see how it will translate well into movie territory and how the relationship and chemistry between the characters is key. Choosing New York as the setting for the book worked really well, so many aspects of life in the city that lend itself to the story. Romantic, heartwarming and fun, this was a great read and I really enjoyed spending a couple of evenings in the company of these wonderful characters.

Allen Wolf has won multiple awards as a novelist, filmmaker, and board game creator. His debut novel, The Sound of Violet, won a Book of the Year Award from Foreword Reviews, Gold Medal from the Readers’ Favorite Book Awards, Silver Medal from the Benjamin Franklin Book Awards, Bronze Medal from the IP Awards, and was a finalist for the USA Book Awards. Kirkus Reviews wrote, “The high-concept narrative is entertaining, well-paced, and highly visual.”

Allen wrote, directed, and produced the movie version of The Sound of Violet that is expected to debut in theaters in late 2021.

As a filmmaker, Allen wrote, directed, and produced In My Sleep which was released worldwide, won multiple film festivals, and is available on Amazon and iTunes. Hollywood Reporter raved, “In My Sleep never rests, a credit to the tight, psychologically astute pacing of filmmaker Wolf.”

Wolf created five board games that won 38 awards – You’re Pulling My Leg!, Slap Wacky, JabberJot, You’re Pulling My Leg! Junior, and Pet Detectives. They have brought smiles to hundreds of thousands of people around the world through his company, Morning Star Games, and are all available as books on Amazon.

He graduated from New York University’s film school. He married his Persian princess and they have two kids together. He enjoys traveling around the world and hearing other people’s life stories. Allen also cherishes spending time with his family, chocolate, and visiting Disneyland.

#bookreview
Some unexpected #bookpost today courtesy of @sevendialsbooks @orionbooks - This Woman by Howard Sounes.
#bookreview
A huge thank you to Weidenfeld & Nicholson and FMcM Associates for the paperback copy of The Maidens by Alex Michaelides. Out on 26th May, I’ll be resharing my thoughts on the book a little closer to the date.
#bookreview by Mandie
Another lovely spot of unexpected #bookpost today, courtesy of Hodder & Stoughton.