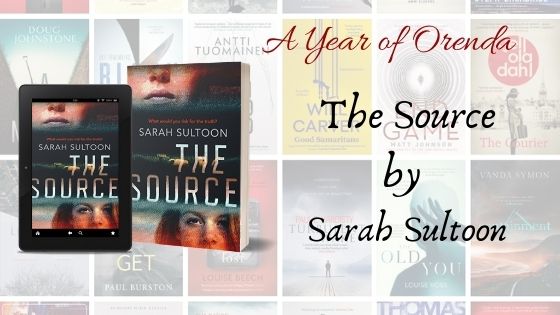 Today Mandie continues her Orenda Books catch up with a review of The Source by Sarah Sultoon. If you’d like to read what I thought you can find my review right here. Here’s what the book is about:

1996. Essex. Thirteen-year-old schoolgirl Carly lives in a disenfranchised town dominated by a military base, struggling to care for her baby sister while her mum sleeps off another binge. When her squaddie brother brings food and treats, and offers an exclusive invitation to army parties, things start to look a little less bleak…

2006. London. Junior TV newsroom journalist Marie has spent six months exposing a gang of sex traffickers, but everything is derailed when New Scotland Yard announces the re-opening of Operation Andromeda, the notorious investigation into allegations of sex abuse at an army base a decade earlier…

As the lives of these two characters intertwine around a single, defining event, a series of utterly chilling experiences is revealed, sparking a nail-biting race to find the truth … and justice.

A riveting, searing and devastatingly dark thriller, The Source is also a story about survival, about hopes and dreams, about power, abuse and resilience … an immense, tense and thought-provoking debut that you will never, ever forget.

With the opening of the book detailing reporters Marie and Dominic going undercover to expose a child trafficking ring you know that the subject matter in The Source is going to be both dark and disturbing, but it is only when the story splits to the earlier timeline of schoolgirl Carly that you realise that there is more to this book.

The book is split between two timelines 10 years apart yet linked together when the Met decide to re-open investigations into Operation Andromeda that looked into child sex abuse in a military base. Whilst it may not take long for you to understand the true connection between Marie and Carly (the child at the centre of the original investigation) it does not detract from the fact that this is a story about much more than the physical abuse that was suffered.

Carly and her sister were let down by people they trusted, the ones that should have been looking after them. Despite this Carly is stronger than she may appear, she ensures that her sister is looked after to the best of her ability when their mother seems incapable. Her one escape is her friend who lets her feel normal, like any other teenager. Her brother stationed at the local army base does his best to provide food and essentials for them, but this help comes at a cost that ultimately Carly does not want to pay. Throughout you are willing Carly to see what is happening and to say no but you can also understand why she does not want to rock the boat as she fears what will happen if she does.

Marie is a more aloof and untrusting character that is harder to understand, and she often seems at war with herself between the story she was initially working on and seeing it through to her further investigations into Operation Andromeda but eventually it all becomes clear, and you can see that she too has been let down by people she should have been able to trust to do the right thing.

Whilst the setting of this book may be in a fictional military base it just highlights the reality that often it is those that are the most trusted or have the most power that abuse this in the most shocking ways possible. Sarah Sultoon has managed to deal with these issues in a way that leaves the reader in no doubt what has happened without the graphic detail that will leave you cold and with that sense of outrage that will stay with you for some time.

Sarah Sultoon is a journalist and writer, whose work as an international news executive at CNN has taken her all over the world, from the seats of power in both Westminster and Washington to the frontlines of Iraq and Afghanistan. She has extensive experience in conflict zones, winning three Peabody awards for her work on the war in Syria, an Emmy for her contribution to the coverage of Europe’s migrant crisis in 2015, and a number of Royal Television Society gongs. As passionate about fiction as nonfiction, she recently completed a Masters of Studies in Creative Writing at the University of Cambridge, adding to an undergraduate language degree in French and Spanish, and Masters of Philosophy in History, Film and Television. When not reading or writing she can usually be found somewhere outside, either running, swimming or throwing a ball for her three children and dog while she imagines what might happen if…

Books by the Sarah Sultoon