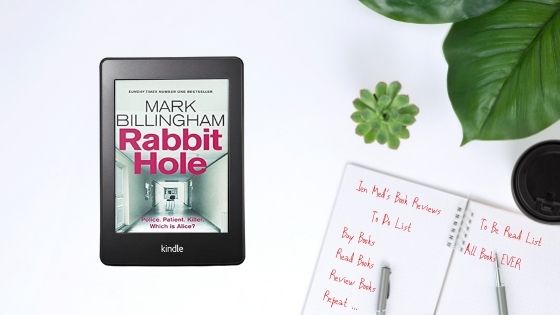 Today I am delighted to share my thoughts on the brand new novel from Mark Billingham, Rabbit Hole. I always look forward to seeing a new Mr Billingham book in the new release listings as you know you’re assured of a few entertaining hours. My thanks to publishers Sphere for providing an advance copy of the book for me to read. Here’s what it’s all about:

My name is Alice. I’m a police officer.
I’m trying to solve a murder on a psychiatric ward.
But I’m also a patient…

They were meant to be safe on Fleet Ward: psychiatric patients monitored, treated, cared for. But now one of their number is found murdered, and the accusations begin to fly.

Was it one of his fellow patients? A member of staff? Or did someone come in from the outside?

DC Alice Armitage is methodical, tireless, and she’s quickly on the trail of the killer.

The only problem is, Alice is a patient too.

Well this book is a step away from the norm … Not in a bad way at all, and to be fair, if you are used to the author’s Tom Thorne series then you will recognise nods to not only some of the characters (including a brief cameo), but also the sense of humour that is infused throughout the books. Now it is more than ‘infused’ in this tale – it is well and truly embedded in Rabbit Hole, a books whose setting in a secure psychiatric unit gives readers not only a whole host of potential suspects, but also a whole range of characters who will make you smile even though, in truth, you know you probably shouldn’t.

At the centre of everything is out protagonist, Alice Armitage, who used to work for the police but who has found herself sectioned for the safety of both herself and those around her. A traumatic event ‘on the job’ led to a complete breakdown and a number of worrying occurrences which mean that, whilst being incredibly forthcoming and forthright as the narrator, also lead you to take all that she says with a pinch of salts. Afterall, few people are sectioned without due cause, and the more we learn about Alice, the more reason we have to doubt that everything she sees, everything she tells us, is entirely on the level. I love the way in which Mark BIllingham has developed her character and the use of first person narration to tell Alice’s story. You can’t help but like her, the nicknames she gives all her fellow patients, and the nursing staff too, and whilst you know that at least as part of her is as mad as the rest of them, there is a certain amount of credibility to her assertions too.

Sorry. Mad probably isn’t the most politically correct way of phrasing it but I’m not sure how else to describe Alice or her actions. The increasingly erratic and sometimes manic behaviour is without a doubt a symptom of her condition (PTSD – definitely no laughing matter) but the way in which the author has framed the story is with the perfect blend of humour and empathy. Yes, some of the conditions of Alice’s fellow patients may feel exaggerated, maybe not, but you feel as though you are laughing with them, not at them, and I loved them all, even toughnut Lauren. Each one had their quirk, their reason for being there, but there were few if any characters I didn’t feel some affinity for by the end of the book. And, all of that aside, there is a serious undertone to the book too. Murder, afterall, is no laughing matter.

I don’t want to go into too much detail of the story – you know all you need to know from the blurb. This is not simply a (air)locked room murder mystery, nor is it a straight up story about psychiatric hospitals and patients a’la Cuckoos Nest. Alice’s conversational, almost confessional narration keeps the mystery mysterious and the humour flowing, as well as allowing us a brief glimpse of some of the more sobering elements of life in care. The fears, the paranoia, the endless cycle of food, meds, sleep repeat that the patients undertake giving the whole book a sense of authenticity. It certainly added to the sense of the terribly unreliable narrator and meant that in terms of the who the why and the how (well – okay not actually the how), readers are kept guessing to the end.

A refreshingly original read that left me with a smile on my face. What are you waiting for?

Mark Billingham has twice won the Theakstons Old Peculier Crime Novel of the Year Award and has also won the Sherlock Award for Best Detective Novel Created by a British Author. His books, which include the critically acclaimed Tom Thorne series, have been translated into twenty-five languages and have sold over six million copies. He lives in London.