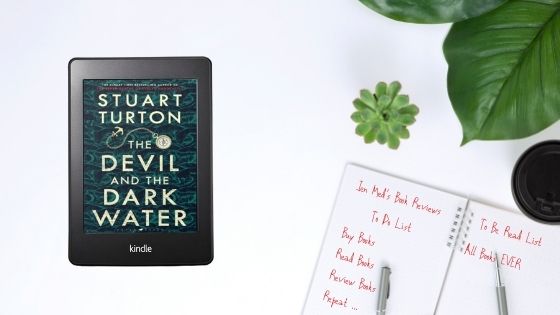 Today I’m sharing my thoughts on The Devil and the Dark Water by Stuart Turton. I’ve had this on my TBR for quite a while so decided it was time to take the plunge (no pun intended) and dove into the audiobook. Here’s what it’s about:

It’s 1634 and Samuel Pipps, the world’s greatest detective, is being transported from the Dutch East Indies to Amsterdam, where he is set to face trial for a crime that no one dares speak of.

But no sooner is the ship out to sea than devilry begins to blight the voyage. Strange symbols appear on the sails. A figure stalks the decks. Livestock are slaughtered. Passengers are plagued with ominous threats, promising them three unholy miracles. First: an impossible pursuit. Second: an impossible theft.

Then: an impossible murder.

With Pipps imprisoned in the depths of the ship, can his loyal bodyguard, Arent Hayes, solve the mystery before the ship descends into anarchy?

From the author of the dazzling The Seven Deaths of Evelyn Hardcastle, winner of the Costa Best First Novel Award, comes an adventurous and wildly entertaining murder mystery.

I really wasn’t sure what to expect from this book when I started listening, and I knew that it was going to take some time to make that mystery journey with Arent Hayes and Samuel Pipps as the audio book is over 15 hours long, but I’m very glad that I made the decision to listen as I was faced with a story that was part mystery, part superstitious ghost story and totally and utterly engrossing. Over the course of the book, I became more and more invested in the characters, most intrigued by the mystery, and definitely more and more curious as to what was really behind the strange happenings aboard the ship, the Saardam.

Now although this is, technically, a historical novel, and it does drawn upon much of the styling of one in terms of authentic and atmospheric setting and the background of the characters, that is probably as far as the similarity ends. You will not find yourselves embroiled in a saga full of elaborate and ancient feeling language or, as I can sometimes find with historical fiction, drowning in the authenticity of the period. There are echoes of the time and the behaviours of the characters are reflective of what I would expect from the era, misogynism, the arrogance that can only come from wealth for example, but the narrative, and the spoken language are far more accessible, which is a blessing. As much as I enjoyed the book, I’m not entirely convinced it would have been as smooth sailing had everything been in more measured seventeenth century style dialogue. Because it was more accessible, more like having a conversation with a peer than a figure from history, it made the characters easier to bond with, made me more interested in them.

The opening to this book is definitely memorable – a leper warning the passengers of the Saardam that they are in danger, effectively forewarning of a curse that will befall them should they choose to take the journey back to Amsterdam. The Governor General, Jan Haan, believes nothing of the warnings, and even when the messenger bows out in absolutely spectacular fashion, he dismisses the curse, determined to fulfil his orders to transport Samuel Pipps back home. Now after such a dramatic opener, I was all the more curious to read how this would impact the voyage and the passengers, and affect them it did. Needless to say they should have heeded the warning as what comes to pass, seems a combination of ghostly goings on and fanciful tales told to scare people into action. Readers are introduced to the legend of Old Tom, a man said to be the incarnation of the devil, and whose ‘presence’ on the Saardam soon starts to cause all manner of wrong doings.

I really liked the character of Arent Hayes. There is something kind of enigmatic about him – a man of honour who has committed to protecting Samuel Pipps, even though Pipps is only aboard the Saardam as a prisoner. Hayes is strong, dedicated, and although not without fault, he is principled, determined to maintain peace when all around him give over to anger. He agrees to uncover the truth about the threat to the ship, to save those aboard, especially his charge, Pipps, and this puts him in danger as well as at odds with many others on board the ship, particularly the soldiers and the crew. There is just something about his nature which makes him immediately likeable, and the more I read, the more I wanted to see him succeed. He has secrets, revealed to readers over the course of the novel, ones which add a new perspective to the threat they face, but there is a confidence about him that made me want to listen on.

It is not all about Hayes though, and Pipps himself is an intriguing character. A puzzle solver, a Detective of sorts, he understands far more than those around him, and I was as intrigued to know why he was incarcerated as I was to find the truth about the legend of Old Tom. Then there is Sara, wife to Haan, and mother to Lia, who has an empathy for the people around her that defies the gruff nature of her husband. The chemistry between her and Hayes is clear, the circumstances of their meeting far from ideal. Add in the Governor’s Mistress and her family and a whole cast of shady and temperamental characters, and the scene is set for a very turbulent journey.

This is not a quick read, or indeed listen, and at times, getting to know the characters and the legend of Old Tom takes some time, but it is all important. All relevant. And this is very carefully spun yarn, so many elements which seem to take readers on a tangent, and which cast suspicion amongst all of the characters in turn, even to a degree to Hayes himself, that it is almost impossible to see where the story is leading. But the way it pulls together, the clever almost Christie-esque discovery of the truth behind the mystery, is both surprising and satisfying. Part of me sort of expected what came to pass, another part was still surprised by the revelations. All of me was entertained.

If you are looking for a fast paced, all action sea-voyage of a thriller then this isn’t the book for you. Likewise, if you are looking for one-hundred percent historical accuracy, then it’s probably not to be found here either. There is much that is of the era, but the boring bits (IMO) have been dropped in favour of far more accessible characters and narrative arc.

If you fancy a Christie style, not-quite-cosy, gothic edged read set amongst all the thrills of life on the high seas, then this could be the books for you. It’s a kind of locked room mystery and also not, but the suspect pool is finite given that it can only be someone on the ship that is causing trouble. Or can it? I guess that rather depends on whether you believe in ghosts …

Stuart Turton is a freelance travel journalist who has previously worked in Shanghai and Dubai. The Seven Deaths of Evelyn Hardcastle is his debut novel. He is the winner of the Brighton and Hove Short Story Prize and was longlisted for the BBC Radio 4 Opening Lines competition. He lives in West London with his wife.