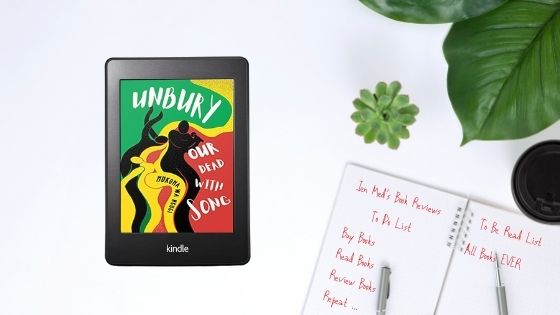 Today I am delighted to share my thoughts on the brand new book by Mũkoma Wa Ngũgĩ, Unbury Our Dead with Song. I read a book by his father, Ngũgĩ Wa Thiong’o as part of my degree, Weep Not Child, one of my earliest experiences of African Literature, and also one of the books I remember most from my college days. When i was offered the chance to read this book, I jumped at it, and have to say thank you to Tim Donald from Brownlee Donald and publishers cassava Republic for the advance copy. Here’s what the book is about.

In the heart of Nairobi, four musicians – The Diva, The Taliban Man, The Corporal and 70-year-old bartender Miriam – gather for a once in a lifetime competition, to see who can perform the best Tizita. In the audience is tabloid journalist John Thandi Manfredi, who is enthralled by their renditions of the Ethiopian blues.

Desperate to learn more, he follows the musicians back to Ethiopia, hoping to uncover the secret to this haunting music. Manfredi’s search takes him from the idyllic Ethiopian countryside to vibrant juke joints and raucous parties in Addis Ababa, set to a soundtrack of stirring Tizita performances.

From the humble domesticity behind the Diva’s glamorous façade, to the troubling question of the Corporal’s military service past, Manfredi discovers that the many layers to this musical genre are reflected in the lives and secrets of its performers.

A love letter to beauty, music and the imagination, Unbury Our Dead with Song captures how it feels have an encounter with the sublime.

This book … You know when you read a book and all you are left with at the end is a kind of sigh? Not a bad sigh. A sigh that both captures the feeling of contentment of finishing a book that just captures your heart, and also, as a book blogger, at the thought of the struggle you will have in finding the best way to convey the feeling of the book to your audience. This is a book which is almost as impossible to define as the almost mythical or magical Tizita that our protagonist, Manfredi, tries so hard to unravel. Ostensibly, this is the story of a journalist who is trying to write a piece about a Tizita competition and the four performers who make up the field. To leave it at, to put it so that is as disingenuous as stating that good music is just seven notes played to a varying accompaniment of sharps and flats.

What the author has managed to do so very skilfully in this book, is to bring together a series of stories, from the initial Tizita competition, to the lives of Manfredi, and the four contestants, The Diva, The Colonel, The Taliban Man and Miriam, in a way that is both everything and nothing at the same time. We are invited into each of their worlds in turn, seen through Manfredi’s eyes and experiences, even the examination of his own familial relationships, as he strives towards an almost impossible goal. The musical equivalent of the search for the Holy Grail. To uncover and determine the meaning, the very heart and soul, of the Tizita. As he, and we as readers come to learn, this is something that is not simple. It is a feeling, a need, and a truly individual journey for each person who performs, or listens to, the music. There is no one definition, no one meaning, and Mũkoma Wa Ngũgĩhas conveyed this perfectly in his beautiful and memorable read.

We begin our journey with the first Tizita competition, not knowing much of the music, the tradition, or the performers. Even Manfredi is an mystery at this stage. as the story progresses we are given more information about each of the characters, more insight into what the Tizita is to them. The love, loss and life which has led to their performances, and as we learn more about them, the difference in style and tone in their initial performances really does make sense. Mũkoma Wa Ngũgĩ has portrayed each of them perfectly, given them such distinct , authentic, voices and styles that when we meet them for round two of the competition, their performances reach that perfect pitch, and their words and their style really comes to life. But we learn more than just their stories, we learn about their culture, about the many faces of the landscape, and the history of Ethiopia, one which goes far beyond the country that most of us remember from the headlines.

As a music lover, I understood this book, understood what it has to say. I have never heard a Tizita, but I’m not sure that I need to as the essence of the music, of all good music, is that it is impossible to define. It is, or it should be, something that lifts you beyond the everyday. Whilst we can all learn the lyrics of the latest pop tune (or whatever the modern equivalent is – I’m an eighties/nineties child at heart) but real music is something you feel. Something that makes you feel. That speaks to you in a way that can be very hard to define, or to explain to another. Good music can lift you, make you cry, but the best always makes you feel something. This is what Mũkoma Wa Ngũgĩ has captured in this book. What he has managed to convey through his prose. Although a book about music might be a story you feel you should hear rather than read, somehow the author has made the music sign through his words. Has captured the very essence of the experience of hearing the Tizita, or being present at the performance, has made the passion and the empathy of the performances, the impact on the audience, literally sing and it is a wonderful read.

This may not be the read for everyone. It is, simply put, the story of five strangers brought together through music and not a lot may seem to happen. And yet it does. Like the Tizita, this is a book you need to experience written by an author who has transported me so brilliantly into their world, made me so curious about this music, that I just want to go away and experience some for myself. Thank heavens for the internet, hey?

Kenyan poet Mukoma Wa Ngugi is the author of Hurling Words at Consciousness (Africa World Press, 2006) and Conversing with Africa: Politics of Change (Kimaathi Publishing House, 2003). He is also columnist for the BBC Focus on Africa Magazine.

His poems have appeared in Tin House Magazine, Brick Magazine, Chiumurenga, Kwani?, and in the anthologies, One Hundred Days, New Black Writing, Reflections on the Rwandan Genocide amongst others.

His features have been carried by Kenya’s Sunday Nation, the East African and The Herald, Zimbabwe and his zmag.org essays such as New Orleans and the Third World and Africa and the War on Terror widely read.

He serves as the coordinator for the Toward an Africa without Borders Organization which looks to bring together academics and activists in an effort to understand and work through African and Diaspora issues and causes, and help bring African ideas and solutions to the forefront of the discussion. http://towardanafricawithoutborders.org.

He has a BA in Political Science and English (Albright College) an MA in Creative Writing (Boston University) and an MA in English (UW-Madison).