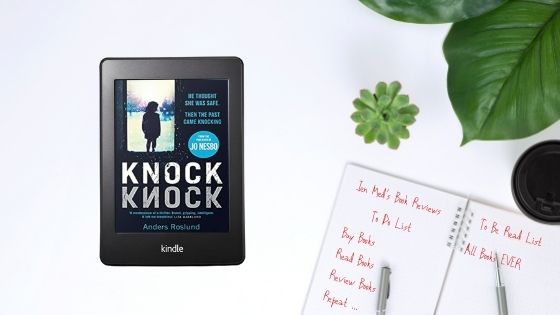 Today I’m sharing my thoughts on Knock Knock by Anders Roslund, an Inspector Ewert Grens thriller. My thanks to publisher Vintage for the advance copy for review and to Rhiannon Morris at FMcM Associates for the tour invite. Here’s what the book is all about:

Set over three explosive days, this is compulsive, heart-pounding storytelling that will keep you on the edge of your seat.

He thought she was safe. Then the past came knocking.

Seventeen years ago, Inspector Ewert Grens was called to the scene of a brutal crime. A family had been murdered, with only their five-year-old daughter left behind. The girl was moved out and placed under witness protection, but while the case went cold, Grens is still haunted by the memory. When he learns that the apartment where the crime took place is now the scene of a mysterious break-in, Grens fears that someone is intent on silencing the only witness. He must race to find her…before they do.

Perfect for fans of Jo Nesbo, Steig Larsson and Samuel Bjork – don’t miss out on the latest Scandi-crime sensation.

Okay. So it’s not really surprising news when I say this is the first book in the Ewert Grens series that I’ve read. This is what I do after all. But I think that in this case it’s been a good test as this really is a self contained thriller that, whilst you will without question get more background on some of the characters if you read earlier books, shows that you really don’t need to in order to appreciate this story, or to get to know the character of Ewert Grens. At least I didn’t.

Be warned. The opening to this story is quite stark, the scene that is set very dark and slightly emotional when you start to understand what it is you are reading. It also comes to inform the case that Ewert Grens is called upon to assist with, a break in at a home he remembers all too well and one that precedes a series of murders that will take him back to a case he can never forget. Alongside this we have a separate story,one which seems immediately at odds with the main case, but one which soon becomes entwined and drives the tension and the action of the whole story.

This was an intriguing story for me. I didn’t see the initial connection between the two story threads and it almost seemed like to different stories. I didn’t know which interested me more, but I found that after a while I was captivated by both. It is not a particularly fast paced read, much of the story being about the investigation and most of the real present tension coming from the secondary story. But from about a third of the way through more starts to become clear, including how the two stories are linked. That’s not to say we have the full picture – we don’t – and the author is able to pull of a number of twists that will leave you surprised and maybe a little shell shocked. I guessed parts, was blind to others – just as a novel should be.

Anders Roslund does a great job of establishing the characters enough for those, like me, who haven’t read any earlier books, but without overloading the book with backstory that could turn off regular readers. I liked Ewert Grens, even if he did seem a little tired, jaded even, and towards the end of his career. His determination to do right by his witness from all those years before really had me rooting for him. Then there is Piet Hoffman, the key character from the secondary story. He is not necessarily the perfect character – let’s say he has an interesting past – but his dedication to his family and his cunning had me on side pretty quickly, even if you couldn’t fully trust him. In fact this felt like. avery character driven story and while setting plays a key role – both set in Sweden and Albania – it is the actions and the past of those central to the story that really dominate.

I’ll admit it. I’m intrigued. Think i’m going to have to go back and see how many of the earlier books I can find. This book has definitely whet my appetite.

ANDERS ROSLUND has published ten novels as part of the successful writing duos Roslund & Hellström and Roslund & Thunberg. His books have been published in thirty languages and he is the recipient of numerous prestigious international awards. Knock Knock is his first solo novel.

#bookreview
Some unexpected #bookpost today courtesy of @sevendialsbooks @orionbooks - This Woman by Howard Sounes.
#bookreview
A huge thank you to Weidenfeld & Nicholson and FMcM Associates for the paperback copy of The Maidens by Alex Michaelides. Out on 26th May, I’ll be resharing my thoughts on the book a little closer to the date.
#bookreview by Mandie
Another lovely spot of unexpected #bookpost today, courtesy of Hodder & Stoughton.