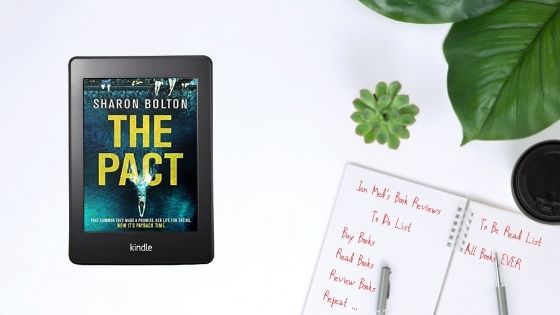 Today I’m delighted to join the blog tour for The Pact, the latest thriller from author Sharon Bolton. My thanks to Tracy Fenton from Compulsive Readers for inviting me to join the tour and to publisher Trapeze for the advance copy for review. Here’s what it’s all about:

A golden summer, and six talented friends are looking forward to the brightest of futures – until a daredevil game goes horribly wrong, and a woman and two children are killed.

18-year-old Megan takes the blame, leaving the others free to get on with their lives. In return, they each agree to a ‘favour’, payable on her release from prison.

It’s been a while since I have read a book in which I find pretty well all of the characters completely contemptible. In which I have never to see them get their just desserts more than I do each of the characters that Sharon Bolton has created in her latest thriller, The Pact. The book follows a group of six friends on the eve of getting their exam results, and the aftermath of a decision they make that night which they all live to regret. A game of dare turns deadly and for one of the six, Megan, steals away the largest portion of her life as she takes the heat for them all. It’s bad enough that they let her do it, they are teenagers and you’d perhaps forgive their panic, but what follows just cemented my dislike of them all. Every single one.

Bizarrely, despite not liking any of them and perhaps, even, because of it, I found myself completely immersed in this book and glued to the page. As I said, I wanted to see real justice done, not just the kind of justice that sees Megan face twenty years in prison. There is almost a sense of shock in the immediate aftermath of that fateful night, and the reactions of the group, the indecision, the panic, the avoidance, are all believable and have such an air of truth about them. But it is when the story picks up some twenty years later, when Megan is released from prison, that things start go get interesting. Megan made them all sign a pact agreeing that they owe her, and it is time to call in that debt. Now some of her demands may shock, they are certainly a little. … unconventional at times. But then when the truth of what Megan went through in prison, of why she served her full sentence is revealed, it is almost possible to feel a little sympathy for her. Almost. And only a little. Sharon Bolton has played a blinder in that even the one of the six who has the greatest claim to the title of victim (and it is a very weak claim at that) is not a really sympathetic character. There is something cold, calculating, about Megan, more than just the remnants of her time inside.

This really is a story of privilege and of that sense of entitlement that is so natural to those who have everything. Even when a friend is in pain they group were oblivious, caught up in their own worlds and needs, and not really seeing what is right in front of their face. She was easy to sacrifice, the scholarship student. No one with the money or influence to really fight for her. Gifted but ultimately expendable. I had guessed Megan’s secret, but not the who or the extent of it, and thankfully it is kept largely off the page. What we learn is dark enough. As for the rest, it is less their actions as teenagers, as awful as they may be, than how they behave as adults that stick in the craw. The author taps into that idea that with money and power your actions and your history can be re-written, and the ends justify the means. And just how far they are all willing to go to protect their perfect lives really does beggar belief, leaving me with a real sense of anger as I read.

The second half of the book is packed with tension that ebbs and flows like the River Cherwell around that exclusive Oxford College they all attended. The sense of threat builds, that urgency and expectation waiting to see how the cat and mouse game plays out. It is almost with a sense of regret the fate that befalls one of the group, perhaps the only one of the six who was truly sorry for what came to pass, but it adds to the mystery, the question marks over where the real threat lies.

This wasn’t a particularly fast paced read, the tempo only really building in the dying pages (no pun intended) when all that has happened before is pushed to a somewhat tragic end. But it held my attention, and I still completed it in a single day. I wanted to know the outcome. I wanted to smile (and I did) when certain characters got what was coming. Overall, I wanted to be entertained and I was. Fans of the author will love this.

Sharon Bolton (previously S. J. Bolton) is the critically acclaimed author of some of the most bone-chilling crime books ever written. She has been shortlisted for the CWA Gold Dagger for Crime Novel of the Year and the Theakstons Old Peculier Crime Novel of the Year. In 2014 she won the CWA Dagger in the Library for her whole body of work.

Sharon lives near Oxford with her husband and son.

3 thoughts on “The Pact by Sharon Bolton”

Fabulous #bookpost today #gifted by @orendabooks.
Today I’ve been sharing my thoughts on the brand new novel from Caroline Mitchell, The Village.
This week I’ve been taking a look at The Undiscovered Deaths of Grace McGill by CS Robertson.
Head over to the blog to find Mandie’s full review of The Engine House by Rhys Dylan.
Sunday starts right here. One skinny cappuccino and a side order of Dolly Parton and James Patterson.
Today I’m sharing my thoughts on The Twyford Code, the very clever new thriller from Janice Hallett.