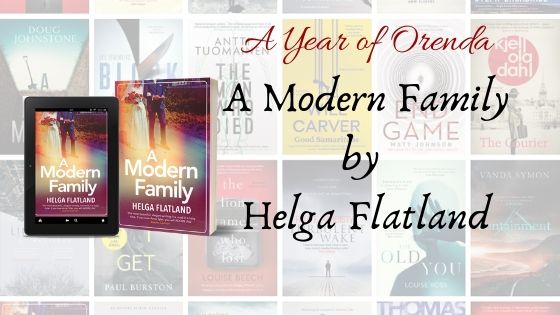 Our celebration of Orenda’s Norwegian authors just wouldn;’t be complete without a look back at our thoughts on A Modern Family by Helga Flatland. Mandie and I listened to this book together and were able to identify with so much of what we heard. Read on to find out more about the book and just what we both thought of it:

When Liv, Ellen and Håkon, along with their partners and children, arrive in Rome to celebrate their father’s seventieth birthday, a quiet earthquake occurs: their parents have decided to divorce.

Shocked and disbelieving, the siblings try to come to terms with their parents’ decision as it echoes through the homes they have built for themselves, and forces them to reconstruct the shared narrative of their childhood and family history.

A bittersweet novel of regret, relationships and rare psychological insights, A Modern Family encourages us to look at the people closest to us a little more carefully, and ultimately reveals that it’s never too late for change…

A Modern Family by Helga Flatland is bloody brilliant – there I have said it. Job done – review over. Only joking… Well the review over part anyway. I listened to the audiobook of this back in June 2019 whilst on a road trip from Northumberland to Stirling and although I am only now just getting around to writing the review, the book itself has stuck with me. What makes this book special? There are no murders, there are no great mysteries to solve. It’s about family. It could be any family and it could be in any location as really these are both secondary to the actual story. And that is the beauty of it.

In telling the story of Liv, Ellen and Håkon and how they deal with the bombshell that, after years of marriage, their parents are divorcing, Helga has essentially managed to tap into the lives of just about everyone who reads this book. Not necessarily from the perspective of divorcing parents, but the family dynamic itself. I certainly recognised some of the things that happened as mirroring my own happyish dysfunctional family, but in a way that made me smile. As you watch how the decision made by the parents has a ripple effect on the children, you witness them question their own lives and decisions, and struggle with what lies ahead for them and how the family dynamic will change forever. They feel like their safety blanket has been taken away from them, after all they had no idea that this was even a possibility. Despite them all now being grown up, they still don’t understand it.

The more I listened to the book, the more I became drawn to the story. It certainly highlights that no matter how close you may think you are as a family, you don’t always know what is going on and that, at times, you see only what you want to or more specifically what you are allowed to. If you are looking for a complete change of pace and want to delve into the psychology of family and relationships, then this really is a book you should pick up a copy of this book and dive between the covers and I challenge you to not be able to relate to it even some small way.

Translated beautifully by Rosie Hedger, A Modern Family is both everything and nothing at the same time. If I was trying to explain to you what happens I would simply say that an extended family – parents, children and their respective families – all go on holiday to celebrate the father’s birthday. Whilst there, Mom and Dad drop somewhat of a bombshell upon the children – they are getting divorced. From here on in the story is about the aftermath. About what happens to a family when the very thing that seems to be holding it together falls apart.

But that description is very basic and doesn’t even begin to do the book justice. Mandie and I listened to the audio book of A Modern Family on route to our own holiday. Ironic, I know. No fear of this trip ending in a parental divorce though as we are (technically speaking) orphans and have been for some time. But it was a really interesting experience listening to the book together and talking about some of the things that happened both during the book and after. So many times we heard a particular sentence or paragraph and we just turned to each other and smiled, thinking, and often saying, yep – that’s us.

Helga Flatland has pulled an absolute blinder in creating a story in which nothing thrilling, shocking, suspenseful or mysterious happens, and yet as readers (or listeners) we were completely drawn in. This is such a clear and very accurate portrayal of family life that you feel as though you are a voyeur or, say, someone in your own home, watching one of those delightful fly on the wall ‘real-life’ docu-soaps that are all the rage. Only with a more genuine script. One that actually resembles real life rather than some falsified drama in order to bolster viewing figures.

The characters in the story – the children Liv, Ellen, and Håkon, and their parents – are so well fleshed out, so full of the quirks and hang ups that we recognised in everyone around us, that they felt very, very real. There is such keen psychological insight in this book that you find yourself becoming invested in their lives as though they were your own friends or family. Liv, the eldest child, feels the pressure of having to be successful and of her husband, Olaf’s, infidelity, even if it is only of the mind and not yet of body. Ellen feels the pressure of wanting so desperately to have a child with her partner and yet never being able to make it happen, but does this mean that her relationship has to fail? Younger brother Håkon feels no such pressure, determining that he will sow his oats as far and wide as possible and that a monogamous relationship is very old fashioned, but is his view tainted by his parent’s separation or something deeper rooted.

It is really hard to describe why, but I think that readers will recognise a little of themselves in each of the characters, or find something to relate to, and in doing so will want to read more. Speaking for myself, that strain of the sibling relationship, the way in which family only really pulls together when there is a crisis was very familiar. I instantly recognised the sense of separation that occurs when the parental bond has come unstuck and how easy it is to drift into very separate lives, only remembering to send good wishes on birthdays and at Christmas. Not every family tree has strong branches. Some bend, others break, and this is reflected in what happens between the three siblings. There is that sense that something still exists between them, and all is not lost, even if their dealings with one another become more fractious and strained as the months pass.

Beautifully written, full of stunning narrative, colourful imagery and very perfectly drawn characters, there was something about this book which just felt right to me. So much that I identified with, some much that left me with a wry smile upon my face that I can do little more than applaud the author. She has managed to capture modern family life to a tee and, from me, and Mandie, this book comes highly recommended.

Helga Flatland is already one of Norway’s most awarded and widely read authors. Born in Telemark, Norway, in 1984, she made her literary debut in 2010 with the novel Stay If You Can, Leave If You Must, for which she was awarded the Tarjei Vesaas’ First Book Prize.

She has written four novels and a children’s book and has won several other literary awards. Her fifth novel, A Modern Family, was published to wide acclaim in Norway in August 2017, and was a number-one bestseller. The rights have subsequently been sold across Europe and the novel has sold more than 100,000 copies.

Rosie Hedger was born in Scotland and completed her MA (Hons) in Scandinavian Studies at the University of Edinburgh, where she graduated with a distinction in Norwegian. Rosie spent a year at the University of Oslo, taking courses in Norwegian language and literature and researching for her dissertation on contemporary Norwegian fiction. Since completing her studies, Rosie has also lived in Sweden and Denmark, and is now based in the UK. – Follow Rosie on Twitter