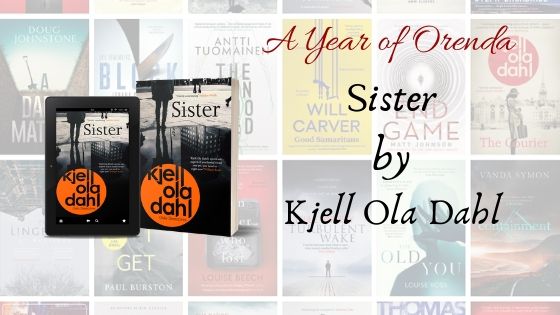 Today Mandie continues her Oslo Detectives catch up with a review of Sister by Kjell Ola Dahl. I love this series, and if you want to know what i thought about Frank Frølich’s return you can find my review here. Here’s what the book is all about:

Suspended from duty, Detective Frølich is working as a private investigator, when his girlfriend’s colleague asks for his help with a female asylum seeker, who the authorities are about to deport. She claims to have a sister in Norway, and fears that returning to her home country will mean instant death.

Frølich quickly discovers the whereabouts of the young woman’s sister, but things become increasingly complex when she denies having a sibling, and Frølich is threatened off the case by the police. As the body count rises, it becomes clear that the answers lie in an old investigation, and the mysterious sister, who is now on the run…

A dark, chilling and up-to-the-minute Nordic Noir thriller, Sister is also a tense and well-plotted murder mystery with a moving tragedy at its heart, cementing Kjell Ola Dahl as one of the greatest crime writers of our generation.

Book 9 in the Oslo Detectives series focuses on Frank Frolic who, after leaving the police force in less than auspicious circumstances, now works as a private detective. After a chance meeting he takes on the case of Aisha who is looking for her sister in the hope that this will prevent her from being deported. As he digs deeper into the case it is clear that nothing is as it seems and there are many secrets that will slowly be uncovered especially when the sister in question says she does not have a sibling and then promptly disappears.

Throughout the book you find that you are routing for Frank, hoping that he manages to get to the bottom of what turns out to be a truly confusing and at times dangerous case. Despite the fact that he knows the case he originally takes on will not pay even his expenses, there is an integrity about him that makes him want to do the right thing. He has not lost his passion for investigation even if it throws doubt at some of his former colleagues. That’s not to say it is all work for Frank as he gets closer to the person who brought him the case in the first place.

These glimpses into his personal life bring something else to the story that is being told. What I loved about this book is the way that several seemingly unrelated events and investigations are expertly weaved together and lead the reader to the eventual ending. This book starts out as a missing person investigation but becomes so much more and we get to see a darker, seedier side to life in Oslo. The story may start slowly but don’t let this fool you.

I have really loved delving into this series. Kjell Ola Dahl has created characters that are very different but very real. His writing style draws the reader in, giving them a real sense of place and enabling them to imagine the locations. Despite this being a part of a series each one can be read in isolation as each one focuses on a different main character which I found refreshing as not only did it mean you could read them out of order, but it also made them unique and gives the reader the feeling they are starting at the beginning. I can honestly say although I have come to Kjell Ola Dahls books quite late I am now a big fan and can’t wait to read more from him