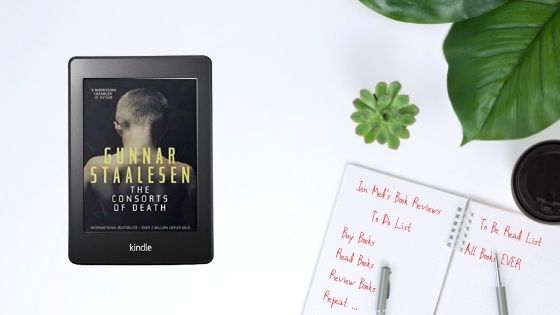 I’m continuing my catch up pf the Varg Veum series by Gunnar Staalesen with a review of The Consorts of Death, the next of the books published in English. Here’s what the book is all about:

September 1995. Veum is in his office when a telephone conversation takes him back 25 years, to a case he was involved in while working as a child protection officer, in the summer of 1970. A small boy was separated from his mother under tragic circumstances. But that was not the end of it. In 1974 the same boy surfaced in connection with a sudden death in his new home.

And again ten years later, in connection with a dramatic double-murder in Sunnfjord. The boy is now an adult, on the run in Oslo, determined to take revenge on those responsible for destroying his life, among them the former child protection officer, now detective Veum.

My foray back into the past of Varg Veum has been everything I hoped it would be. I am loving getting to know more about what makes him tick and what has moulded the man I came to know through the more recent releases. And there is plenty to learn about Varg’s past in Consorts of Death as the latest ‘case’ that he investigates is a potential threat to his own live which links back to a case and a young man who first came to Varg’s attention when he was a social worker.

There are many elements to this story, some disturbing, some emotional, but all carefully and skilfully crafted and developed with Gunnar Staalesen’s usual ease. This is the story of Johnny Boy a young man whose life has been one complication and drama after another, his upbringing traumatic and his connection to Varg part of a long and very twisted story. We are given not only the background to their first meeting, but all of the various times in which their lives have intersected throughout the years. Johnny boy is a very complex character, very angry, understandably so the more we learn of his past, but whether it is fair that his hatred is aimed towards Varg, we have to let the story unravel to find out.

This is another book which explores from very important issues. Amongst them are the impacts of early childhood trauma or disturbance on the way in which they behave in the future, and also the way in which the adults in Johnny boys life are willing to make sacrifice anything in order to protect, or incriminate him. As much as we are privy to the threat against Varg, and the sense that the danger is drawing ever closer, there is a real emotional core to the story as always, and i could not help but feel real sympathy for Johnny boy, in spite of the crimes he stood accused of.

I love the way in which Gunnar Staalesen so clearly sets the scene in all of his books, be it giving us a clear picture of the key players, or in the way in which he allows us to travel to Bergen and its surrounds, both in location and in time, letting us ride on Varg’s ample if already burdened shoulders. Told in Varg’s voice, there is a more conversational style to the tale, a recounting of what happened as much as being fully immersed in the action itself, and perhaps it is Varg’s innate sympathy that rubs off on me as a reader, but it really does make me more invested in the story and in what becomes of the people Varg strives to help.

These are not fast paced stories, although there are real moments of jeopardy littered throughout, and there is always a sense that trouble is only a moment away from our hero. The ending is shocking, the story ending on somewhat of a cliffhanger, but the tragedy that ensues fits in with the whole book perfectly, even if it can’t be said that justice is felt to be fully done. If you like books with a real heart, in which the emotional toll of the investigation is avery bit as important and the case itself, then I definitely recommend this series.

Gunnar Staalesen was born in Bergen, Norway in 1947. He made his debut at the age of twenty-two with Seasons of Innocence and in 1977 he published the first book in the Varg Veum series. He is the author of over 20 titles, which have been published in 24 countries and sold over two million copies. Twelves film adaptations of his Varg Veum crime novels have appeared since 2007, starring the popular Norwegian actor Trond Epsen Seim.

Staalesen, who has won three Golden Pistols (including the Prize of Honour), lives in Bergen with his wife. Cold Hearts, Yours Until Death, The Consorts of Death, and The Writing on the Wall are all published in English by Arcadia Books.

One thought on “The Consorts of Death by Gunnar Staalesen”