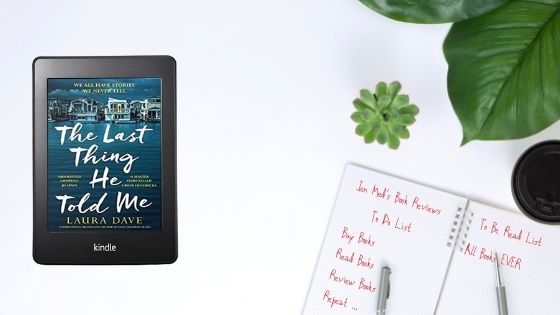 Today I’m delighted to share my thoughts on The Last Thing He Told Me by Laura Dave. My thanks to publisher Viper Books for providing an advance copy of the book for review – here’s what it’s all about:

IT WAS THE LAST THING HE TOLD ME: PROTECT HER

Before Owen Michaels disappears, he manages to smuggle a note to his new wife, Hannah: protect her. Hannah knows exactly who Owen needs her to protect – his sixteen-year-old daughter, Bailey, who lost her mother tragically as a child. And who wants absolutely nothing to do with her new stepmother.

As her increasingly desperate calls to Owen go unanswered, his boss is arrested for fraud and the police start questioning her, Hannah realises that her husband isn’t who he said he was. And that Bailey might hold the key to discovering Owen’s true identity, and why he disappeared. Together they set out to discover the truth. But as they start putting together the pieces of Owen’s past, they soon realise that their lives will never be the same again…

A beautiful and thrilling mystery, perfect for readers of Lianne Moriarty and Celeste Ng.

Imagine everything you thought you knew being turned on its head with just one letter. One very short letter of just two words. That is exactly what happens to Hannah in The Last Thing He Told Me when she finds out her marriage to Owen has been built on a foundation of lies. Not only is he potentially mixed up in a massive fraud case, he is also missing and neither Hannah nor her step-daughter Bailey really understands why. The mystery only gets deeper as Hannah tries to track back to the root of Owen’s lies and that’s where the tension really starts.

This is a twisting and creeping kind of a book, the tension slow to build, the early parts of the story spent in establishing the current state of play, of getting to the heart of the matter – the fraud case and Owen’s disappearance, whilst also introducing the key players in this mysterious tale – Hannah, Bailey and Owen. I like the way in which the author has used Hannah’s first person perspective to bring Owen’s character to life. Given that we never physically meet him at in the present story – he is gone and intending to stay gone – utilising Hannah’s memories to give us a clear picture of the man she fell in love with cements him in my mind as a sympathetic character there is something about him, even if he does have an apparent tendency to stretch the truth.

Hannah is a character I grew to like very quickly, stuck in an impossible situation she cannot understand, with a step-daughter who hates her and the authorities breathing down her neck in a bid to find Owen. She has an admirable strength of character, and an emotional intelligence which allows her to act when it is needed. Not all of her decisions are the wisest as it happens, but her determination to get to the truth really drives the story onward. Bailey is the kind of child I’d like to slap – not necessarily because of how she acts when her father disappears, more for her whole attitude, but the more you learn of her, the more it becomes clear that she is just a lost child, a teenager, and her bond with her father is not something she wants to share freely. But I’d still like to slap her. It’s just a personality thing – I’m not really into child abuse …

The story is steeped in mystery and a growing sense of jeopardy the closer that Hannah and Bailey get to the truth. So many secrets are uncovered, so many surprises in store for the pair, that it keeps you hooked on the story right to the last page. The second half of the book has more pace than the first, the initial chapters really taking time in setting the scene. As Hannah draws closer to the truth you can feel the pace increasing, the sense of something being slightly off kilter getting a little stronger and that sense of threat bubbling along underneath, even if the real danger never quite presents itself. At least not until near the end. With such cloak and dagger style behaviour, especially surrounding the fraud case and the key player involved in that, it’s hard to know who to trust and, like Hannah, I never quite settled on trusting anyone that she came into contact with. The truth, when it comes, is a real twist in the gut for Hannah and Bailey, but it fits the story, feels quite possible. It draws us to a quick, tense and family led finale in which Hannah is able to really show her strength in adversity.

An intelligent, thoughtful read that is full of mystery, suspense and strong characters that kept me engaged to the very last page.

Laura Dave was born in New York City and grew up in Scarsdale, New York. She graduated from the University of Pennsylvania with a BA in English, and went on to gain an MFA from the University of Virginia’s creative writing program. She was a Henry Hoyns Fellow and a recipient of the Tennessee Williams Scholarship. She is the national and international bestselling author of Eight Hundred Grapes, London is the City in America, The Divorce Party, The First Husband and Hello, Sunshine. Her fiction and essays have appeared in The New York Times, Oprah Magazine, Glamour, Redbook, The Huffington Post and The New York Observer. In 2008, Cosmopolitan named her a ‘Fun and Fearless Phenom of the Year’. She is married to Oscar-winning screenwriter Josh Singer, with whom she resides in Los Angeles, California.