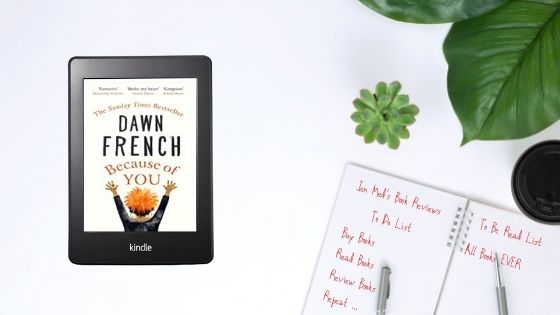 Today I’m thrilled to share my thoughts on Because Of You by Dawn French. My thanks to Kealey Rigden of FMcM Associates for inviting me to join the tour to celebrate the paperback publication, and to publisher Penguin Michael Joseph for providing an advance copy for review. Here’s what it’s all about:

The old millennium turns into the new.

Seventeen years later, the gods who keep watch over broken-hearted mothers wreak mighty revenge, and the truth starts rolling, terrible and deep, toward them all.

The power of mother-love will be tested to its limits.

Because Of You is Dawn French’s stunning new novel, told with her signature humour, warmth and so much love.

I’ve been meaning to tuck into one of Dawn French’s books for a while and being invited to join the tour was just the perfect excuse to do just that. Not that I really needed an excuse, but the blurb intrigued me and after reading back to back crime titles, as is the norm, it made for a nice change of pace. Sort of – the book isn’t entirely adrift from the crime genre, and when you read it you will understand why. But what happens is not about the crime, about the whodunnitry of the story – that is at the very heart of what happens – it is about the people behind the story. About how their lives intersect and the way in which a tragedy leads to a snap decision, and the impact that it has on two families who are most definitely chalk and cheese.

The story begins as two women, Hope and Anna, arrive at the same hospital at the same time, both about to give birth to their first child. Anna is the wife of a politician and has everything. Hope fell pregnant unexpectedly and her partner is a student, who has little to offer her other than love and a very suspect and ancient used car. Both give birth to beautiful daughters, but one is stillborn, and that is where the tragedy begins. What should have been a beautiful and celebratory day is marred by the tragedy and what follows only compounds the tragedy further. Dawn French has played this part of the story very carefully and cannily, capturing the emotion whilst developing a very clear picture of the characters at the heart of the story. You can feel the devastation of the mother who has lost everything, balanced against the mother who has it all – the longed for child, even if their circumstances are not all they would wish them to be. These early scenes set the story up perfectly, with some heartbreaking moments, but also some humour, and it made me really invested in the lives of the two women right from the start.

Now I really liked the character of Hope. She is determined for someone so young, and whilst you may question her behaviour and the decision she makes, there is absolutely no doubting her love for her partner, Isaac, and for her daughter. You know she is a woman who would sacrifice everything for her child and alongside her family, she is a wonderfully colourful and rounded woman you cannot help but like. Anna is a very different kind of mother. Quite staid – stoic even – her husband, Julius, is a complete arse, egotistical, misogynistic and interested in only his career, and there are many times I wanted her to tell him to jog on. She is far stronger than she appears and I developed a real respect for her as a character, for the way in which she handles the situation she finds herself in. It is far from enviable in spite of the privileges she enjoys, but whilst I was initially unsure about her, about the way in which she was portrayed, she most certainly earned a place in my heart.

There are other characters on the periphery of this story, but it is hard to talk about them without giving away too much of the story. I will say that Mike Thripshaw really brought the humour to the story, even if it was unintentional on his part. The constant misquoting and mixing of sayings – ‘wolves in cheap clothing’ for one example – but it kept what could have been a very tough subject light, funny. It made me chuckle anyway, especially when he had a run of wrong sayings, all those old catchphrases we so commonly mishear. And then there is Minnie. Hope’s daughter, destined to follow in her mother’s footsteps, but the person who brings Hope and Anna together a tragic and unexpected way. i really liked Minnie, liked her spirit, her passion and the very beautiful and honest relationship she has with Hope. She has been raised to have a good heart, rather ironic given the way the story plays out.

This is a book full of humour, love, fun, tragedy and moments of real poignancy. It’s a story where a bad decision is made but where you will find it hard to condemn the person for making it, or for what follows. Everything that you witness in the book is driven love, especially what happens in the final chapters. Be prepared that you may need tissues because in those dying pages Dawn French elicits such a reaction from the reader, creates such heartfelt emotion in Hope’s letter to Minnie, that is it a hard heart who won’t be moved by what they read. A mother’s true love for their child, the ultimate gift and a decision as monumental and dramatic as the one which started the whole story. This is a quick book to read but it packs one heck of a punch and I am very glad I read it. If you like to read a warm, funny, emotional book then I definitely recommend you pick this one up. You won’t be disappointed.

Dawn French has been making people laugh for thirty years. On purpose.

As a writer, comedian and actor, she has appeared in some of the UK’s most long running, cherished and celebrated shows, including
French and Saunders, The Comic Strip Presents …, Murder Most Horrid, The Vicar of Dibley, Jam and Jerusalem, Lark Rise to Candleford, and more recently, Roger and Val Have Just Got In.

One thought on “Because of You by Dawn French”