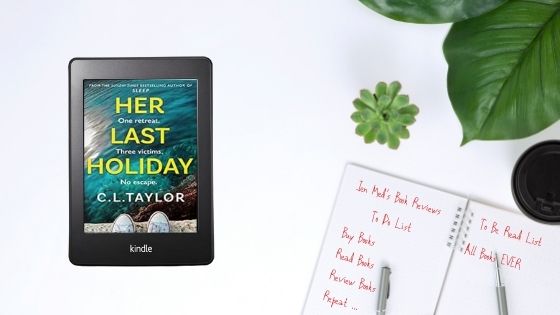 Today I’m sharing my thoughts on the latest psychological thriller from C.L. Taylor, Her Last Holiday. I really enjoy. this author’s books so was thrilled to have an early copy from Netgalley. Here’s what it’s all about:

You come to Soul Shrink to be healed. You don’t expect to die.

Tom Wade, the now infamous man behind Soul Shrink Retreats, has just been released from prison after serving his sentence for the deaths of two people. But he has never let on what happened to the third victim: Jenna.

Determined to find out the truth, Fran books herself onto his upcoming retreat – the first since his release – and finds herself face to face with the man who might hold the key to her sister’s disappearance. The only question is, will she escape the retreat alive? Or does someone out there want Jenna’s secrets to stay hidden?

Oh I do love a good C.L. Taylor thriller and this one is another classic. I tore through this in a single day, intrigued by the premise and determined to find out what really happened to Fran’s sister, Jenna, all those years ago. I must admit to being prone to more than a small amount of scepticism when it comes to self-help gurus and retreats such as the one depicted in this book, and having spent time with Tom Wade, Karen and ‘Soul Shrink’ I’m not readily inclined to change my mind. Not that they are all as dangerous as this retreat turns out to be, I’m sure, but the book has done little to convert me to the dark side.

The story is told from the series of three women – Fran, a teacher and whose sister went missing at Soul Shrink’s final, fatal, retreat in Gozo; Kate, financial and marital partner to soul Shrink’s resident guru, Tom Wade and Jenna, Fran’s sister, and whose disappearance is the catalyst for the story that is about to unfold. Set both in the present day and on that fateful week three years earlier, the author slowly allows the truth to unfold, keeping tension high and readers completely guessing. We know something happened to Jenna – her family and the authorities suspect she committed suicide – but with no note, no body and nobody who can give them closure, the question remains, why? Why did she disappear and, if the worst did happen, why did she do it. Well … the truth is all laid out there but clues are drop fed, suspicion awakened and the shocks are all set to be unleashed at just the perfect moment, as CL Taylor is well skilled at.

I kind of liked the character of Fran. She is far from perfect – spiky, intolerant of others and generally anti-social to be fair. She is my kindred spirit, which is possibly why I was happy (ish) in her company. There are reasons behind her defensiveness, least of which being her overbearing mother who coerces her into going to Soul Shrink’s latest retreat in the first place, but seeing her determination and her natural suspicion of everything and everybody, her in built cynicism, really brought a smile to my face.

Kate – well now she is quite the character. The author has pitched her perfectly, her obsessive and controlling nature combined with a less than healthy dose of paranoia making for a heady mix. At times she appears to be the perfect wife, devoted to her husband and sticking by thin through. thick and thin, yet you are always made to wonder if there is more lurking under the surface. As for Jenna, she is far from perfect but the groundwork is laid throughout so that we can see her as part victim and part orchestrator of her own fate, however awful that may finally become. And the charismatic Tom wade – conman, victim or saviour. Well – jury’s out here to be fair. There may be some acute observations hidden in in his therapy sessions, he certainly pushes Fran to the limit. Or it may just all be psychological guff and hokum. He certainly charms the pants off the ladies in the book but you should read it and decide for yourself.

The many characters who lurk around the periphery of the two retreats leave us with a whole host of suspects in the event that Jenna’s fate was as awful as we may suppose. They are the perfect blend of the neurotic, the angry and the larger. than life eccentric, and when some of them appear on the latest incarnation of the Soul Shrink retreat in Wales, you know the scene is set for quite a dramatic finale. The author uses setting perfectly, from the atmospheric climate of the Welsh countryside and the relative danger of the pursuits the residents undertake, through to the more sunnier but seemingly no less threatening setting of a luxury hotel in Gozo, each location adds to the drama and the tension of their particular aspects of the story. You can feel the threat quite overtly in dull, occasionally wild and often chilling Wales, the beauty of Gozo serving to hide some of the biggest shocks of all.

It certainly wasn’t what I expected, a mixture of deep psychological probing in which all of the characters’ fears and flaws are laid bare, leading to a dramatic and pulse pounding climax in which all of the secrets of the past are revealed, but I certainly enjoyed it, completing the book in a single sitting.Pacing is perfect and the mystery kept me hooked. If you’re a fan of the author this is definitely recommended.

C.L. Taylor is a Sunday Times bestselling author. Her psychological thrillers have sold over a million copies in the UK alone, been translated into over twenty languages, and optioned for television. Her 2019 novel, Sleep, was a Richard and Judy pick. C.L. Taylor lives in Bristol with her partner and son.

5 thoughts on “Her Last Holiday by C.L. Taylor”