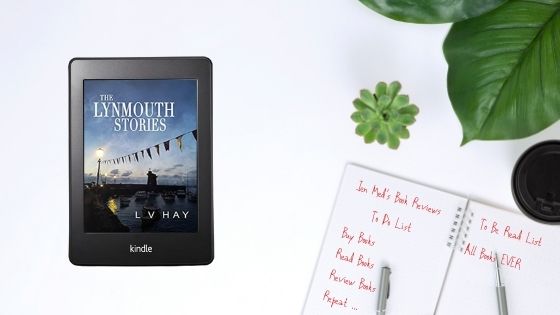 Today I’m delighted to join the blog tour for The Lynmouth Stories by L.V. Hay. My thanks to Anne Cater of Random Things Tours for inviting me to join in. Here’s what it’s all about:

Devon’s very own crime writer L.V Hay (The Other Twin, Do No Harm) brings forth three new short stories from her dark mind and poison pen:

– For kidnapped Meg and her young son Danny, In Plain Sight, the remote headland above Lynmouth is not a haven, but hell.

– A summer of fun for Catherine in Killing Me Softly becomes a winter of discontent … and death.

– In Hell And High Water, a last minute holiday for Naomi and baby Tommy becomes a survival situation … But that’s before the village floods.

All taking place out of season when the majority of tourists have gone home, L.V Hay uses her local knowledge to bring forth dark and claustrophobic noir she has come to be known for.

Located on the doorstep of the dramatic Valley of The Rocks and the South West Cliff Path, the twin villages of Lynton and Lynmouth have inspired many writers, including 19th Century romantic poet Percy Bysshe Shelley, who honeymooned there in 1812.

This book is a small collection of short stories looking at some of the darker sides of a beautiful tourist town and proving that you just don’t know what is going on behind closed doors. It’s hard to say too much about the stories themselves as, being short stories of 7-8 pages, it would be easy to give the game away. However, don’t let the short nature of the book or the stories fool you. There is a heck of a lot going on in those pages.

With In Plain Sight, the author manages to capture not only the sense of horror and fear, almost helplessness of the victims, Meg and Danny, you also get a sense of determination and perhaps even hope. There is a lot of strength of character brought forward in just a handful of words and it’s quite an impactful piece. Likewise, Killing Me Softly left me a little stunned at the ending and yet it seemed most fitting due to the melancholic tone of the whole piece. you can feel where the story is leading but still be surprised by its final destination. Hell and High Water examines a toxic relationship, coercive and abusive control and all its aftermath – with surprising results.

All stories as easily accessible for teens and up, any real sense of violence kept off the page whilst still hitting the mark psychologically. If you are looking for a great character led but quick read, one that manages to convey a hell of a lot of story in a very short space of time, whilst still capturing the setting and its raw beauty perfectly, then this is a great book to pick up.

L.V. Hay is a novelist, script editor and blogger who helps writers via her Bang2write consultancy. She is the associate producer of Brit Thrillers Deviation (2012) and Assassin (2015), both starring Danny Dyer. Lucy is also head reader for the London Screenwriters’ Festival and has written two non-fiction books, Writing & Selling Thriller Screenplays, plus its follow-up Drama Screenplays. She lives in Devon with her husband, three children, six cats and five African Land Snails.

3 thoughts on “The Lynmouth Stories by Lucy V Hay”