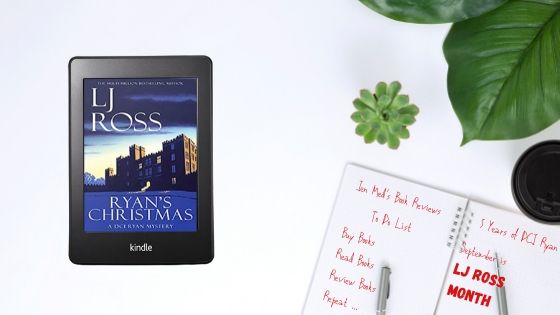 Today Mandie continues her DCi Ryan catch up with a review of Ryan’s Christmas. A little out of season, but then we like to be a bit contrary plus we need to keep the books in order. 😉 Here’s what the book is all about:

Christmas can be murder…

After a busy year fighting crime, DCI Ryan and his team of murder detectives are enjoying a festive season of goodwill, mulled wine and, in the case of DS Phillips, a stottie cake or two—that is, until a freak snowstorm forces their car off the main road and into the remote heart of Northumberland. Their Christmas spirit is soon tested when they’re forced to find shelter inside England’s most haunted castle, where they’re the uninvited guests at a ‘Candlelit Ghost Hunt’. It’s all fun and games—until one of the guests is murdered. It seems no mortal hand could have committed the crime, so Ryan and Co. must face the spectres living inside the castle walls to uncover the grisly truth, before another ghost joins their number…

You would think that at Christmas Ryan, Anna and co would be able to sit back, relax and enjoy the holiday period like the majority of us. As nice as that sounds it would make for a rather dull read. Caught out by severe weather Ryan, Anna, Frank and Mackenzie end up having to take shelter in Chillingham Castle with a group of people who are there for a ghost hunt. When someone is murdered, they have to find out who did it and why but without their usual back up or access to modern technology.

I am beginning to think that as much as I would love Ryan and co to be on my side if I was in trouble, I think that if they turned up anywhere I was staying I would beat a hasty retreat as I am not sure if trouble follows them or they have a knack of finding it. Once again LJ Ross has given her readers a great read with just the right amount of mystery and tension. As the secrets of each of the castle’s inhabitants are revealed, you will find yourself trying to see if you can work out who the killer is before Ryan does and who else may be targeted. If I am honest this is one of my favourites of the series as there is the added twist of age-old ghost stories and they have to go back to old fashioned detective work and not rely on modern technology. The location of Chillingham Castle is just brilliant and as they carry out their investigations, I can picture the place perfectly due to the descriptive writing I have come to expect and love in this series. At book number 15 in the series, you have to wonder what else is in store for Ryan but I can guarantee that Ryan’s Christmas will have you reaching for book number 16 to find out.

One thought on “Ryan’s Christmas by LJ Ross”