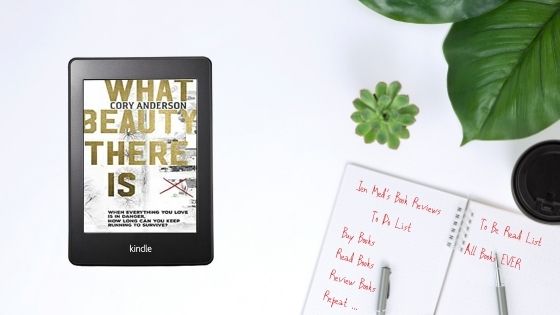 Today it is my great pleasure to share my thoughts on What Beauty There Is, the brand new Young Adult thriller from Cory Anderson. My thanks to publisher Penguin who provided a copy via Netgalley and to Dave at The Write Reads for inviting me to join the tour. Here’s what the book is all about;

When everything you love is in danger, how long can you keep running to survive?

Life can be brutal
Winter in Idaho. The sky is dark. It is cold enough to crack bones.

Jack knew it
Jack Dahl has nothing left. Except his younger brother, Matty, who he’d die for. Their mother is gone, and their funds are quickly dwindling, Jack needs to make a choice: lose his brother to foster care, or find the drug money that sent his father to prison.

So did I
Ava lives in isolation, a life of silence. For seventeen years her father, a merciless man, has controlled her fate. He has taught her to love no one.

Did I feel the flutter of wings when Jack and I met? Did I sense the coming tornado?
But now Ava wants to break the rules – to let Jack in and open her heart. Then she discovers that Jack and her father are stalking the same money, and suddenly Ava is faced with a terrible choice: remain silent or speak out and help the brothers survive.

Perfect for fans of Patrick Ness, Meg Rosoff and Daniel Woodrell, What Beauty There Is an unforgettable debut novel that is as compulsive as it is beautiful, and unflinchingly explores the power of determination, survival and love.

I’ll be honest, I don’t often read YA these days as I am ever so slightly (very, very) over the target age ranges for these books. That is not to say that there is not beauty and honesty hidden within the pages of a good YA book, and if you are looking for that beauty, that blend of tragic inevitability, melancholy and atmosphere, then you really do need to pick this book up. From the very first page I felt compelled to read onward, to discover the ultimate fate of Jack and his brother, Matty, and it was with almost breathless anticipation that I reached the end, totally moved and thoroughly satisfied. This for me had echoes of Chris Whitaker or Amy Engel in tone, and although the central characters of Jack and Ava are teenagers, their circumstances slightly different, they are no less tragic or poignant, all of which is captures perfectly on. the page.

This is, essentially, the story of Jack Dahl, a teenager exposed to far more tragedy and loss than anyone his age should have to deal with. His father is in prison and his mother makes a most tragic of decisions leaving Jack and his younger brother, Matty, to fend for themselves. Jack knows that in order to survive, in order to stay together, he has to make some very mature, and very dangerous, decisions and take decisive action to keep them both safe. His actions leave his and Matty’s lives in real danger but the alternative is no more palatable. They also bring the pair right into the sphere of Ava, anew girl at Jack’s school, and someone who is nursing her own secrets and tragedy.

From the very beginning of the book you can feel the sadness seep from the page. There is a sense of tragic acceptance from Jack that belies his years, and almost at once I found myself with real sympathy for him. The decisions he makes may seem rash at first, but as we learn more about his family life, the circumstances in which he lives, and the fierce determination he has to do anything for his younger brother, the more understanding I had about the decisions he made and the more I wanted to see him come good. Cory Anderson has played a brilliant game, taking Jack to the point of despair so many times, pushing readers right to the edge and setting the perfect tone from the off. The overwhelming sense that there can be no real happy ending and yet never yet allowing us to give up hope completely.

Jack and Ava are the perfect pairing. Whilst their personal circumstances at first appear to be very different, there is a definite sense of the kindred spirits about them. some invisible force which pulls them together. It is clear from the start that Ava knows far more about Jack than she does of him, and as her own secrets are revealed I found I was left both stunned but also concerned. There are elements about her own family which give readers cause to pause, and although nothing is every played out on the page, you know that she is very much a bird caught in a gilded cage, no less a victim of her upbringing than Jack and Matty.

The story is infused with tension, threat facing Jack at every turn. With no family and no friends to turn to he is forced to grow up far too soon. The way in which. his character is portrayed is believable and adds a core of strength and determination to what could otherwise be a truly dark novel. And yet it is not. Although there is violence, it is understated, more implied that unnecessarily graphic, and the language and imagery used throughout the book makes it more atmospheric than catastrophic in it’s telling. It is a beautiful thing, not just the way it depicts strength in adversity or the flawed and ill-fated sparks of young love, but also the way in which the story develops that sense of sacrifice. Of how far a person might go to protect the person that they love, be. they family or not.

It is a tragedy. It is a love story. It is a story of neglect and of how easily children can slip through the cracks when it comes to their protection. It is a story of family and, against all the odds, it is a story that has a sense of hope. So no, you won’t find a classic happy ending here. No happily ever after for all of the key players. But you will find a novel with truly memorable characters, beautifully evocative and atmospheric language and a story that lingers in the mind long after the last page is turned. If this is the author’s debut, I am certainly looking forward to reading more of her work in the future. Definitely recommended.

Cory Anderson is a winner of the League of Utah Writers Young Adult Novel Award and Grand Prize in the Storymakers Conference First Chapter Contest. She lives in Utah with her family. What Beauty There Is is her debut novel.

3 thoughts on “What Beauty There Is by Cory Anderson”