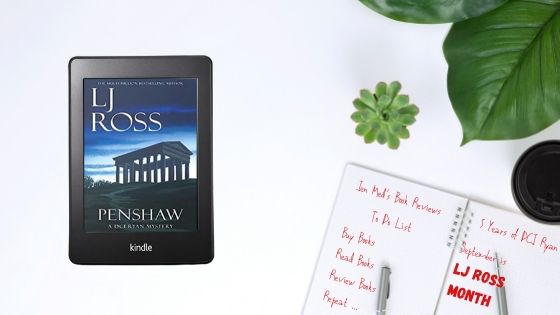 Back to Mandie as the DCI Ryan fest continues with her review of book 13, Penshaw. Unlucky for some, but not for readers, as this was another cracker taking in yet more of Northumberland’s many hidden treasures. Here’s what the book is all about:

When you sell your soul, the devil gives no refunds…

When an old man is burned alive in a sleepy ex-mining village, Detective Chief Inspector Ryan is called in to investigate. He soon discovers that, beneath the facade of a close-knit community, the burn from decades-old betrayal still smoulders. When everyone had a motive, can he unravel the secrets of the past before the killer strikes again?

Meanwhile, back at Northumbria CID, trouble is brewing with rumours of a mole in Ryan’s department. With everyone under suspicion, can he count on anybody but himself?

Its hard to believe that Penshaw is book number 13 in the DCI Ryan series as each one brings you stunning locations and a new murder to investigate, and this book is no exception.

When Ryan and Phillips are called to a house where its occupant has been burned alive, they are drawn into a case that brings back memories of the miners strikes for Frank. When they find that the victim was accused of being a mole during the strikes they do have to wonder if even after all these years someone has decided to get revenge. The family seem to have split over the years with one turning to drugs and the other to public office but do not seem to be able to shed any light on a possible motive. This is one case that is certainly going to challenge the team as they try to find out who would want to do such a despicable thing to an old man.

This is not the only case that Ryan has to deal with. He is also leading a task force hoping to take down a crime ring and once again Jack Lowesons impetuousness and impatience put the team in a tough spot (predominantly Ryan) causing the usually straight as a die DCI to act against his nature in order to protect the young DC. But then again, he is more than a work colleague… to Ryan he is family and that matters to him.

There is one welcome addition to this close band of friends in the form of the little pocket rocket Sam who those of you that have read the Moor will have come across. She is still full of sass and causing Phillips and Mackenzie both moments of joy and stress in equal measure. Although she is changing the dynamic of the group a little its fun to see how they all react to her.

Once again Louise Ross has given her fans a fast-paced book where not everything is as straightforward as it seems and that goes for their personal lives as much as their professional ones. The more I read of this series the more I become invested in all of the characters and I find that I really want all of them to have just a few moments of normal, where everything seems to be calm, but with all their past histories and personal demons somehow, I just cant see that happening anytime soon and lets face it where would be the fun in that anyway.

Today I share my thoughts on the latest novel from Antti Tuomainen, The Rabbit Factor.
Today I’ve been sharing my thoughts on Dark As My Heart by Antti Tuomainen over on the blog.
Playing review catch up
Today I’m sharing my thoughts on The Last Time She Died by Zoë Sharp.
A big thank you to @headlinebooks for this #gifted #bookpost - a copy of Good Cop Bad Cop by @simon_kernick. Really looking forward to reading it for the @randomthingstours next month.
Treated myself to a new book this week - Billy Connolly’s Autobiography. Can’t wait to read it.