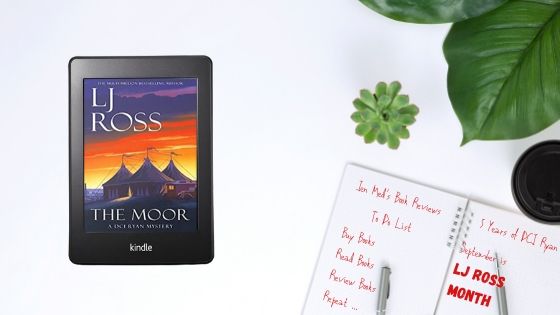 Today Mandie has a review of book twelve in the DCI Ryan series, The Moor as her DCI Ryan catch up continues. Read on to find out what the book is all about.

The circus is in town…

When a ten-year-old girl turns up on DCI Ryan’s doorstep to tell him she’s witnessed a murder, he has no idea he’s about to step into his most spellbinding case yet. The circus has rolled into Newcastle upon Tyne, bringing with it a troupe of daring acrobats, magicians, jugglers—and one of them is a killer.

Ryan and his team must break through their closed ranks to uncover a secret which has lain buried for eight years, before the killer strikes again – this time, to silence the only living witness…

The Moor is book 12 in the DCI Ryan series and with each book you can’t help but get involved with the characters, their investigations and even their personal lives. This time Ryan and co are dealing with an old murder case that is brought to them by a 10-year-old circus girl called Sam when she turns up totally unexpected at Ryan’s door. This isn’t going to be an easy case as apart from the fact there is currently no body, the witness is remembering something that happened several years ago, and the circus community is not very forthcoming with help as they don’t have a tendency to trust the police. With Jack Lowerson and Melanie Yates busy with another case Ryan and Frank are really going to have their work cut out sorting the truth from the lies.

This case certainly challenges the team as they wind their way through all the mistrust and misdirection from the circus staff especially Sam’s dad and initial chief suspect, however the biggest challenge for them actually comes in the form of Sam herself. From an early age she has learnt to fend for herself, so she is definitely not your typical 10-year-old and she is keeping them on their toes that’s for sure. Her attitude and determination makes them all want to solve the mystery and keep her safe all at the same time. I absolutely love her and the changes she elicits in all of them even without them realising it bringing a new dimension to all their relationships. Its nice to see a child that is depicted as intelligent, inquisitive and vulnerable without being a brat. The fact that she is more than a match for Frank is a definite bonus.

I have to say that it was nice to see Jack finally starting to get back to his old self and step up to the plate. That’s not to say that he isn’t still just that little bit headstrong and impulsive, making him make mistakes, but with Melanie Yates at his side you kind of get the feeling that eventually it will all come good and that they will work out just what it is that is going on between them. The Moor is certainly a tale of secrets and lies and the lengths people will go to in order to protect the status quo and a brilliant addition to the ever growing series that has had me gripped from book one.