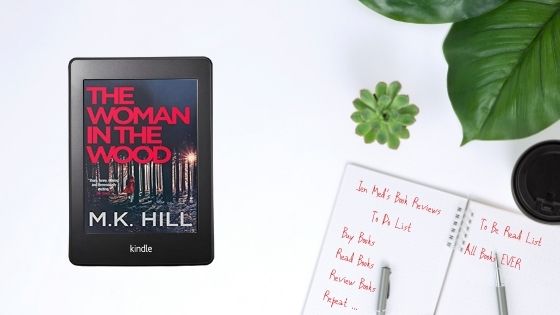 Today I am delighted to share my thoughts on The Woman In The Wood, book two in the Sasha Dawson series by M.K.Hill. I really enjoyed the first book in the series and have looked forward to seeing what kind of drama Sasha found herself caught up in this time around. Here’s what it’s all about:

A reality TV star becomes a suspect in an Essex murder case in the sharp, funny and moving new thriller from M.K. Hill

Three years ago, Danny ‘Abs’ Cruikshank, star of reality show Laid in Essex!, was living the dream. But on the night of the party, everything changed.

It was supposed to be an intimate weekend gathering, just a few close friends in a remote cottage in Wales. But after a night of heavy drinking in the village pub, a local girl was reported missing – and never seen again. Abs and his friends had been the last to see her alive.

No-one was ever charged, but the controversy destroyed Abs’s career. And now one of his mates has been murdered…

DI Sasha Dawson and her team must race against the clock to find the killer before they strike again – but first she must discover what happened to Rhiannon Jenkins on the night she vanished. Will the truth set Abs free? Or bury him?

What a way to open a book. It’s an accident on the rails, but did he fall or was he pushed? Well … if you read the opening chapter to the book, you’ll know the answers. lies somewhere horribly in between, but the reasons for the not quite straight forward demise of this books first victim is far more complex than Sasha Dawson and her team can imagine and more so than even the reader might realise. We know that he is guilty of something, his drunken ramblings leaving little doubt about that, but as for what. Well that is something that will slowly but surely be revealed over the course of the book, a story filled with a brilliant blend of tension, humour and surprises that I ate up.

This time around the author has tapped into a world that readers will easily recognise and either love or loathe. The wonderful world of reality TV and the concept of celebrity for a return of little talent. This is not the whole of the story, but it is something which definitely informs what happens and the course of the investigation as one of the victims friends is former reality TV star, ‘Abs’ Cruikshank, a man whose catchphrase is as pointless as his celebrity status. Or should that be ‘former celebrity’ status. There is defining moment in his life that derailed his career as a media darling and is set to blight his future too. It is thus which brings him front and centre in DI Dawson’s investigation and right into the spotlight for readers. He’s a seemingly vacuous character, but it would be unfair to say that this is all that defines him. For all his faults, and there are clearly many, it is apparent that he is someone only searching for acceptance and one bad decision, a very, very bad decision has cost him dearly. But he is someone who cares. About his friends and about doing the right thing. Albeit a tad too late.

I really enjoy getting to know more about Sasha Dawson and her team. She went through the ringer last time around and it’s fair to say that it’s no plain sailing for her this time either, finding herself in a difficult and dangerous position as the investigation progresses. But I love her fierce determination and the dynamic between her and her team is great, even if she does overstretch herself at times. We also get to see more of her familial situation and the scenes in which she tries to rekindle the romance in her marriage do elicit the odd smile too.

The are a few different storylines in this book that the author has carefully interwoven in a way which you won’t initially see coming. The more we read, the more we understand the characters and the clearer the picture becomes. It draws us to a tense and a dramatic conclusion as the killer is revealed as well as a well hidden secret. Nothing is dealt with in a graphic way, but the implications are enough to get the skin itching. And then there is the ending. Fun, light and in keeping with the story, indicative of the nature of Abs, a man who can try and turn even the bleakest of times to a positive ending.

I really enjoyed this book and look forward to seeing where the author leads us next. If you enjoyed the first book, The Bad Place, then I am certain you will enjoy this too. Sasha Dawson and crew are a team who are rapidly growing on me and it’s great to see such a positive, strong but believable female character front and centre at the helm of the series.

Mark Hill was a journalist and an award-winning music radio producer before becoming a full-time writer. The first novel in the Sasha Dawson series, The Bad Place, was described as ‘everything a police procedural should be’ by The Times, who also named it as their crime book of the month. He lives in London.

One thought on “The Woman In The Wood by M.K. Hill”