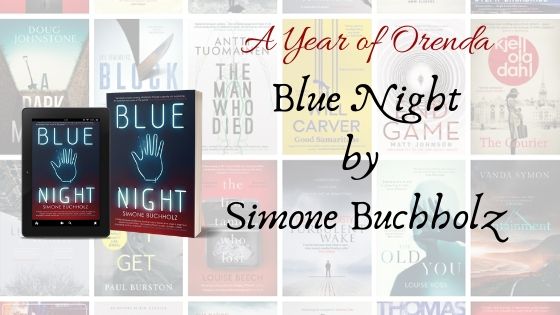 This month Mandie is playing catch up on the Chastity Riley series by SImone Buchholz as we build up to. the release of book four, Hotel Cartagena, later this month. First up is Blue Night, the first book in the series, and you can find out what I thought of the book right here. Here’s what it’s all about:

The hair stands up on the back of my neck and I get an age-old feeling in my belly. Like there’s a fight ahead. Like something’s really about to go off…

After convicting a superior for corruption and shooting off a gangster’s crown jewels, the career of Hamburg’s most hard-bitten state prosecutor, Chastity Riley, has taken a nose dive: she has been transferred to the tedium of witness protection to prevent her making any more trouble. However, when she is assigned to the case of an anonymous man lying under police guard in hospital – almost every bone in his body broken, a finger cut off, and refusing to speak in anything other than riddles – Chastity’s instinct for the big, exciting case kicks in.

Using all her powers of persuasion, she soon gains her charge’s confidence, and finds herself on the trail to Leipzig, a new ally, and a whole heap of lethal synthetic drugs. When she discovers that a friend and former colleague is trying to bring down Hamburg’s Albanian mafia kingpin single-handedly, it looks like Chas Riley’s dull life on witness protection really has been short-lived…

Fresh, fiendishly fast-paced and full of devious twists and all the hard-boiled poetry and acerbic wit of the best noir, Blue Night marks the stunning start of a brilliant new crime series, from one of Germany’s bestselling authors.

Blue Night is the first in the Chastity Riley series and I am not going to lie when I say that at first, I found this book a little confusing and it took me a while to get into it. I had been warned that this series was a little different and I am going to have to agree there but different is good and once I got into the story, I really enjoyed it and raced through to the end.

Chastity Riley is a feisty no nonsense Public Prosecutor who has found her career stalled and is now basically babysitting victims and witnesses. It is this latest victim that has got Chastity’s interest as initially he refuses to tell her anything. As she finally gains his confidence, she finds herself getting involved in investigations into the seedy drugs world that has also managed to touch her small group of friends in various ways.

I found myself taking to the character of Chastity straight away. There is just something about her as she recognises her own flaws as easily as she does in those around her. She is not easy to trust people but that also seems to give her a “sixth sense” about when people are keeping things from her. As much as the mysteries “Joe” seems to be the victim, there is something about him that has you intrigued as to exactly where he fits into everything, but he is not going to make it easy. As the book progresses you learn quite a lot about her friends and colleagues through the main action and little side snippets. At first, I wasn’t sure how these mini chapters would work or if they would spoil the flow of the book as I have had problems with things this in the past. There is something about they way Simone writes that means these little insights into all the main characters enhances the story and help make it make sense.

Blue Night is not a long book but at no point do you feel that as the reader you are being short changed or that the story is rushed. This is my first introduction to German crime fiction and it has been worth the wait. I am looking forward to reading the next in this series and to see what Simone Buchholz has in store for Chastity Riley.

Simone Buchholz was born in Hanau in 1972. At university, she studied Philosophy and Literature, worked as a waitress and a columnist, and trained to be a journalist at the prestigious Henri-Nannen-School in Hamburg. In 2016, Simone Buchholz was awarded the Crime Cologne Award as well as runner-up for the German Crime Fiction Prize for Blue Night, which was number one on the KrimiZEIT Best of Crime List for months. She lives in Sankt Pauli, in the heart of Hamburg, with her husband and son.

Books in the Chastity Riley Series: