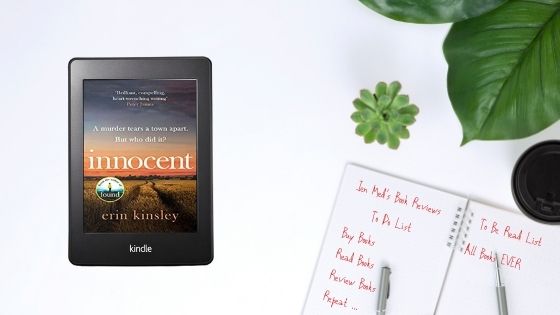 Today I am sharing my thoughts on Innocent by Ern Kinsley. I’m playing a little bit of catch up this year on books I’ve had sitting on the TBR for far too long and this one was pleading for my attention. My thanks to publisher Headline who provided the copy for review. Here’s what it’s all about:

The pretty market town of Sterndale is a close-knit and caring community; the perfect place for friends Izzy and Laura to raise their children. But their lives are suddenly shattered following a brutal murder at a summer wedding…and everyone is terrified knowing a killer lives amongst them.

Suddenly, Izzy doesn’t know who she can trust while Laura sees suspicion and paranoia spreading through the town. As the police search for answers – and relationships begin to unravel – the secrets lurking beneath the pristine surface of Sterndale come to light…and the shocking truth will finally be revealed.

A gripping and moving thriller with the emotional drama of series like BROADCHURCH and LIAR this is the perfect read for fans of Cara Hunter, Heidi Perks and Claire Douglas.

This is the first book I’ve read by Erin Kinsley, but I’m sure this won’t be the last. This wasn’t a fast paced read, perhaps not even what you could call a standard police investigation style thriller, although an investigation did feature. This was more of a domestic noir, a look into the private lives of the victim and their loved ones and the impact of the ultimately vicious attack has on the lives of all of those around them., It is a very complex tale which causes shockwaves amongst the community, as much because of the identity of the victim as anything else but it is clear from the beginning that it is a story that has very deep and twisted roots and it is going to take a lot of digging to finally unearth the truth.

The first part of the novel is very much spent in setting up the story, establishing the key players in the eventual investigation. It allows us to have a sense of the people we are going to spend time with and the author does a brilliant job in setting up the victim as a likable and popular man before slowly revealing a series of situations and secrets which start to undermine his reputation. The emotional turmoil that this causes in his wife, Izzy, feels authentic, and her suspicion and fears prevent her from acting in what you might consider to be a more logical way. The dynamic between Izzy and her in-laws plays out perfectly, in a way that will resonate with many readers I am sure, and the extra burden of having a young daughter who doesn’t understand what is happening will certainly tug at the heart strings.

I have to be honest and say that I had worked out who the attacker was quite early on in the story, and the clues are all there for those of us who are emotionally removed from the action. There is enough doubt cast throughout the book, both about the victim and the dubious nature of some of those who inhabit his world, as well as some of the secrets he has been keeping from his wife that will make you think twice. For me, this book was as much about the emotional journey of the characters, the devastating impact of what comes to pass on those who are close to what happens, as it was a bout the whodunnit, an almost secondary concern given the nature of the story. But I really did enjoy the author’s style of writing, emotional and evocative, something that completely engaged me without need to use gratuitous shocks to keep my attention on the page.

4 thoughts on “Innocent by Erin Kinsley”