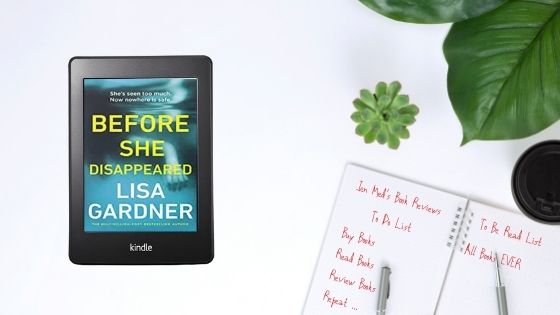 It’s a phrase I am thinking of adopting as my new catchphrase, but this really is the first book I have read by this author. I’m really rather glad I have though. My thanks to publisher, Century, and Rachel Kennedy for inviting me to review and for providing a #gifted copy of the book. Here’s what it’s all about:

From the Sunday Times bestselling author Lisa Gardner, a gripping thriller featuring an ordinary woman who will stop at nothing to find the missing people that the rest of the world has forgotten.

Frankie Elkin is an average middle-aged woman with more regrets than belongings who spends her life doing what no one else will: searching for missing people the world has stopped looking for. When the police have given up, when the public no longer remembers, when the media has never paid attention, Frankie starts looking.

A new case brings Frankie to Mattapan, a Boston neighborhood with a rough reputation. She is searching for Angelique Badeau, a Haitian teenager who vanished from her high school months earlier.

Resistance from the Boston PD and the victim’s wary family tells Frankie she’s on her own. And she soon learns she’s asking questions someone doesn’t want answered.

But Frankie will stop at nothing to discover the truth, even if it means the next person to go missing will be her …

I really like Frankie Elkin. There I’ve said it. And it’s important because this book is told from her point of view and when you are looking at first person narrative, you’ve really got to like the character. And I did. I really did.

From the very beginning there is just something about her that drew me in as a reader. I’ll admit that I was intrigued by her lifestyle choices – a finder of lost people as you will – rocking up where the police have failed and finding out what really happened to missing people across America. She doesn’t do it for reward and lives a very humble and limited life as she remains as transient as possible. She finds the cases she wishes to take by using Library computers and checking discussion boards and missing person sites and she goes where she thinks she can make the most difference. She is haunted, yes. Imperfect, definitely. But that’s all part of what makes her such a likeable character because she feels authentic, like someone you could expect to meet in the street. There is no pretence that she has super human skills or unlimited resources. She is just Frankie. Lisa Gardner really has done a brilliant job in establishing her character quite quickly whilst retaining a certain amount of mystery for us to slowly discover over the course of the book. And I wanted to know more about her, how. she came to choose this life and what drove her on in true ‘Littlest Hobo’ style, never wanting to settle down.

The case that she has chosen to follow up on this time is of missing Boston teenager, Angelique, or Angel as she is known to her friends. Her brother is insistent that she would not just run away, even though the Police think otherwise. Frankie believes him, her only job know is convincing the family that she can make a difference. And convincing the police that they are wrong too. The story is full of tension and between the gritty urban setting and the mysterious circumstances of the girl’s disappearance, you are kept on a knife edge. throughout with a sense of threat underplaying all of the action. From direct threats to Frankie’s life, to the more subtle methods employed by the people trying to prevent her finding out the truth, the tension and pacing are just pitched perfectly throughout, increasing my need to keep reading.

Now one of the key things about this kind of story is to retain that authenticity, to make it believable. You have a civilian who is insinuating themselves into a police investigation, finding out more that the Cops have been able to achieve in months. But that is exactly that Lisa Gardner manages to achieve. Inspired by real life and the civilians who continue to search for missing people when everyone else. has given up, the author has created a character who relies on her wit and her instinct rather than any overwhelming kind of intelligence to get people on side, using logic and an understanding of people and what drives them to get to the truth. And what a shocking truth it is too. There are so many connotations as to what could happen to a young girl who has gone missing, none of which are particularly palatable. The author manages to keep all in play whilst hiding the truth in plain sight, and the more we learn alongside Frankie, the more intriguing the story becomes.

Now while this is told from Frankie’s perspective, she is not the only person searching for Angel. Of course there is her brother, Emmanuel, who. is certain she would never leave him and who is determined to find her. The author developed his character perfectly – that defiance and determination battling against the vulnerability which he tries valiantly to hide. Watching Frankie slowly win over his trust, and seeing how much he needed to believe that she can make a difference, really brought the human factor to the case. Then there are Frankie’s co-workers, Viv and boss, Stoney, who may not be in the story much but whose presence is definitely felt. Viv adds such a colourful character whilst Stoney, a man of very few words, silently gives Frankie the confidence and support that she needs. But it is Frankie’s relationship with Detective Lotham, the Cop in charge of the case, which really adds the fire to the story. Lotham is gruff, often angry, and always reluctant to include Frankie and yet seemingly unable to resist her clear charms. They often rub each other up completely the wrong way and yet there is such perfect chemistry between the two that it is a joy to read.

This is a truly gripping novel, full of tension and a surprisingly emotional core, with characters and story which kept be completely gripped from the off. I know I’d be happy to meet up with Frankie again in the future, but for now I’ll settle for heading back to the Lisa Gardner back catalogue, see what other treats there are waiting for me.

At the tender age of twenty-seven, Lisa Gardnerbecame an overnight success with the publication of her first thriller, The Perfect Husband. Launching to the top of the New York Times bestseller list, Lisahas since become an international bestseller of over twenty thriller novels, including the #1 NYT bestselling series, the FBI Profiler series, the Detective D.D Warren series and the Tessa Leoni series. She has had four books adapted into TV movies: At the Midnight Hour, The Perfect Husband, The Survivors Club and Hide, and has also made personal appearances on TruTV and CNN.

Her novel, The Neighbour, won Best Hardcover Novel from the International Thriller Writers and the Grand Prix des Lectrices de Elle in France. She was also recognized with the Daphne du Maurier Award in 2000 for The Other Daughter. Lisa received the Silver Bullet Award from the International Thriller Writers in 2017 for her work on behalf of at-risk children and the Humane Society.

3 thoughts on “Before She Disappeared by Lisa Gardner”