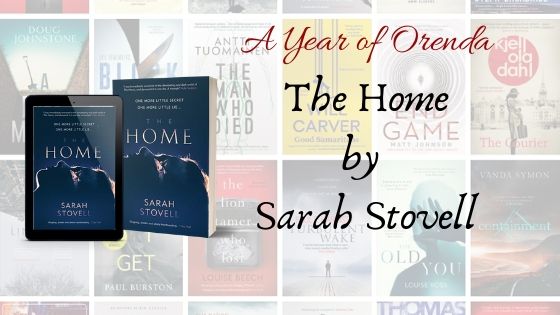 Today I pass back to Mandie for her review of The Home by Sarah Stovell as her Orenda Books catch up continues. I read this for the tour last year and you can find my review right here. Read on to see what Mandie thinks and to learn more about the book.

When the body of a pregnant fifteen-year-old is discovered in a churchyard on Christmas morning, the community is shocked, but unsurprised. For Hope lived in The Home, the residence of three young girls, whose violent and disturbing pasts have seen them cloistered away…

As a police investigation gets underway, the lives of Hope, Lara and Annie are examined, and the staff who work at the home are interviewed, leading to shocking and distressing revelations … and clear evidence that someone is seeking revenge.

A gritty, dark and devastating psychological thriller, The Home is also an emotive drama and a piercing look at the underbelly of society, where children learn what they live … if they are allowed to live at all.

When the book opens with the death of a young girl who is a resident of a children’s home you get the sense that this book is possibly not going to be an easy read and for some the subjects that are an integral part of the story may not be something that they are comfortable reading, yet Sarah Stovell deals with it all in a sensitive way and nothing is gratuitous. Yes, it is not always pleasant, but it is still a story that will grip you and break your heart in equal measure.

The Home is the story of Hope, Annie and Laura, 3 young girls who have all found themselves residents of a children’shome that is due to be closed and the girls themselves sent to various different establishments across the country. After Hope is found in the local churchyard with Annie distraught by her side, initial thoughts are that maybe Annie is responsible. As you follow the story told by both Annie and Hope you learn so much as to why they ended up in care and how some of the people from their past are still influencing their actions and have a role to play in what happened. Laura is there in the background for most of the story and you don’t truly find out what happened with her family until nearly the end, but it is no less shocking.

Sarah Stovell has created three very damaged, yet believable characters that have been let down by the families they should have been able to trust and the local authority that should have protected them further. I did find that the first half of the book was a slow burn but even then, I couldn’t put it down, so compelling was the story being told. I wish that I could say that even though this is a work of fiction, the things depicted in this book could never happen but unfortunately that is not the case and I think that is what will stick with the reader.

The Home is certainly a book that will stick with me for a long time to come for a variety of reasons, but I was left with the hope that those who survived the tragedy manage to find some peace and happiness in the end.

Sarah Stovell was born in 1977 and spent most of her life in the Home Counties before a season working in a remote North Yorkshire youth hostel made her realise she was a northerner at heart. She now lives in Northumberland with her partner and two children and is a lecturer in Creative Writing at Lincoln University. Her debut psychological thriller, Exquisite, was called ‘the book of the summer’ by Sunday Times.