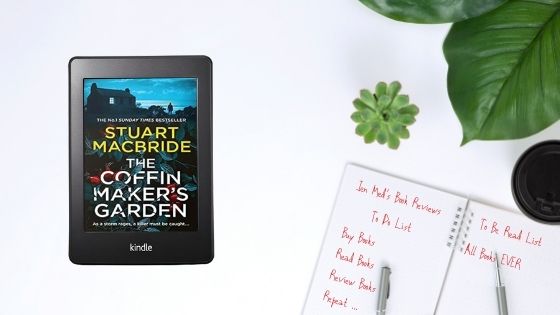 Today I am so thrilled to share my thoughts on The Coffinmaker’s Garden by Stuart MacBride, finally a third book in the Ash Henderson series. Ash Henderson was the first Stuart MacBride character I met and I have to say I loved him, so hearing a new book was on the way I was very excited. And a little nervous. It’s been a while since the last book and I have distant memories of it being dark and deadly so my expectations were set kind of high on this one. Read on to see if they were met.

A village on the edge…
As a massive storm batters the Scottish coast, Gordon Smith’s home is falling into the North Sea. But the crumbling headland has revealed what he’s got buried in his garden: human remains.

A house full of secrets…
With the storm still raging, it’s too dangerous to retrieve the bodies and waves are devouring the evidence. Which means no one knows how many people Smith’s already killed and how many more he’ll kill if he can’t be found and stopped.

An investigator with nothing to lose…
The media are baying for blood, the top brass are after a scapegoat, and ex-Detective Inspector Ash Henderson is done playing nice. He’s got a killer to catch, and God help anyone who gets in his way.

I won’t lie. I was a touch apprehensive going into reading this book, partly because I have memories of the Ash Henderson books being ones that I really enjoyed so going back to a series after such a long time you have to wonder if the magic can be recaptured. I didn’t re-read the books before I read The Coffinmaker’s Garden and I can’t decide if that was a good or bad move on my part, as it may well be that my memory is clouded. I did have in. the back of my mind the fact that we had taken a trip back to Oldcastle in more recent times with A Dark So Deadly, a book that I loved for its amplified dark humour but that was at odds with the darkness of Ash Henderson’s world. Well … The Misfit Mob are back, in a much lesser capacity, but enough to inform the story and add a few more comic moments to what would otherwise have been a very dark story.

So – did it work? Well, by and large yes. There are two threads to this story. The first is the investigation into the abduction and murder of young boys from around Oldcastle. This is the case that Ash and Dr Alice McDonald are working on when they get a call to attend a scene of a tragic maritime accident in a small coastal village, where an unexpected discovery has been made. Bones. Lots of them. In a garden which is rapidly disappearing into the North Sea due to coastal erosion. But it is not this alone that forces Ash to work alongside DI Malcolmson, a.k.a. ‘Mother’, and her Misfit Mob, but the altogether more grim findings in the basement of the home that the garden and said bones seem to belong to.

This is a rather dark tale of torture and murder, and that is before we even consider the investigation into the missing boys which is sending Alice into an ever growing sense of despair. So in many respects, the lighter side of the story offered by the banter between Ash and Mother is welcomed. It is not as slapstick in style as ADSD had been, but there are enough moments to make you smile and even chuckle in what would otherwise we a very disturbing subject.

There is plenty of tension and many scenes that will make the skin crawl as we come to discover just how dark and twisted the murderer in this case turns out to be. and then you have the story of the young boys who are being abducted, and the emotions and turmoil that we find when faced with the families who are grieving for their lost children. None of this is played for laughs, the division between the two stories quite stark in contrast. Not that the torture and murder of adults is any laughing matter, but it is easier to accept the banter and the back and forth between the characters when faced with this side of the story, and it almost softens the blow a little given the depravity in play here.

This is a dark and atmospheric read, and even in the lightest of moments there is an underlying melancholy, the kind I associate with this series. Ash maybe didn’t come across as tortured this time around, perhaps the passage of time affecting my memory as much as his attitude, but there is a definite sense of resignation to him as well as an overwhelming sense of fatherly protection towards Alice. Tension seeps through from every page and that sense of threat, of danger being never too far away from our protagonist, sometimes very obvious and played out with blow by blow clarity on the page, sometimes less so, just that prickly skin feeling that something bad is about to occur. But Stuart MacBride has balanced it perfectly, managing to take readers right to the edge of the seat with the drama that unfolds.

I did work out a few of the twists in the tale along the way, and perhaps that is just because I read so much crime fiction that I just kind of expected it. But it didn’t spoil my enjoyment of the story, or stop me from wanting to see just how Ash would ensure that the killer was caught or at the very least received their dues. And it was a rather fitting ending to be fair, quite dramatic and right down to the wire, but very apt. It must be painful to live in Ash Henderson’s world and if you are thinking that Stuart MacBride may have been. a little easier on him with his advancing years, you’d be wrong. It is more a case of how much he can take than how much can you expect to be doled out.

Full of the trademark grim humour and the kind of dark scenes from a classic Henderson/Logan novel, I think fans of the author will love it. There was only one element for me which went awry and that was with Alice. She is a troubled soul, and that shows through in her actions and behaviours throughout the story. There were just a few too many moments of eccentricity for me and it did start to grate after a while. There are reasons for her behaviour which become clearer as you read on, but her behaviour at times reaches almost mania stage and if I say that she seems to pick up the mantle from Shifty, you’ll know what I mean. It just felt a bit too much at times, but not enough to detract from my overall enjoyment of the book. It was good being back in Ash’s world and I hope it’s not too long before we venture back there again.

Stuart MacBride was born in Dumbarton near Glasgow but grew up in Aberdeen. He is the number one bestselling author of several novels featuring DS Logan McRae. He has been shortlisted for the Theakston’s Old Peculier Crime Novel of the Year Award twice. Stuart won the 2007 CWA Dagger in the Library, awarded for a body of work, and was named Best Breakthrough Author at the 2008 ITV Crime Thriller Awards.

One thought on “The Coffinmaker’s Garden by Stuart MacBride”