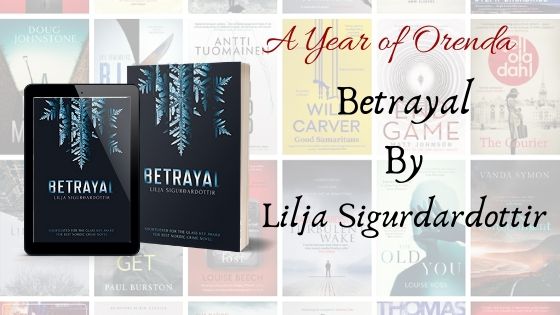 It’s the final month of our Year of Orenda. Can you believe that? Me either. But what better way to recognise this fact, and that we are now on the final countdown to Christmas, than with a look at the three wonderful Icelandic authors of Orenda Books. It’s also the perfect excuse to count down to Jolabokafloð, and a bit later in the month we will be offering the chance to win some of the fabulous books that we will be featuring over the next couple of weeks. Today Mandie starts us off with Lilja Week and a review of Betrayal by Lilja Sigurðardóttir, an absolutely cracking political themed story that I read earlier in the year (it’s also one of the books you can win – just saying). You can find my review right here. Read on to find out more about the book and what Mandie thought of her first taste of Icelandic Noir.

When aid worker Úrsula returns to Iceland for a new job, she’s drawn into the dangerous worlds of politics, corruption and misogyny … a powerful, relevant, fast-paced standalone thriller.

Burned out and traumatised by her horrifying experiences around the world, aid worker Úrsula has returned to Iceland. Unable to settle, she accepts a high-profile government role in which she hopes to make a difference again.

But on her first day in the post, Úrsula promises to help a mother seeking justice for her daughter, who had been raped by a policeman, and life in high office soon becomes much more harrowing than Úrsula could ever have imagined. A homeless man is stalking her – but is he hounding her, or warning her of some danger? And why has the death of her father in police custody so many years earlier reared its head again?

As Úrsula is drawn into dirty politics, facing increasingly deadly threats, the lives of her stalker, her bodyguard and even a witch-like cleaning lady intertwine. Small betrayals become large ones, and the stakes are raised ever higher…

Although Betrayal is the latest book by Lilja Sigurðardóttir, it is the first one I have read and what a cracker it is. I became so drawn into it that I devoured the whole thing in one day and for anyone who knows how slowly I can read at times then it just shows how much I enjoyed it.

After agreeing to settle down in Iceland after years of working as an aid worker, Ursula takes on an interim role in the local government. She is aware that she may not have been the first choice for the job, but she is determined to make a difference. From day one she knows that its not going to be as easy as she hoped as she has to deal with a woman whose daughter has been raped and she is being stalked by a homeless man. If that isn’t enough, she is also not convinced she has the backing and loyalty of the staff around her.

There is so much going on in this book, yet it flows brilliantly. Ursula is dealing with a lot, a new job, threats to her life, and guilt over her apparent lack of feelings for her family. She is trying her best not to let anyone down and you can really see how she struggles with this at times. She does however find an ally in the form of her driver/bodyguard, Gunnar. He is super serious about his job and at the beginning makes more of it than it really is. As things escalate however he proves just how indispensable and trustworthy he can be.

Lilja has explored the many forms of betrayal in this book,trust, power, family and vows. Each one is woven into the story, adding to the tension and I am not going to lie but there were times that I was completely clueless as to who was behind some of the things going on, so when they were revealed it was a bit of a surprise. Ultimately Betrayal shows that there are never any winners, and no one comes out unscathed and sometimes it is the people that seem invisible that can hold some of the cards. Having worked in the Civil Service for over 30 years I am glad that I am far enough removed from the “politics” that I never have to deal with the kinds of things that went on in the government offices in Ursula’s world.

I have only really started reading books in translation in the last 12 months but with authors like Lilja around, I know that I will be reading a lot more of them in the future.

Icelandic crime-writer Lilja Sigurdardóttir was born in the town of Akranes in 1972 and raised in Mexico, Sweden, Spain and Iceland. An award-winning playwright, Lilja has written four crime novels, including Snare and Trap, the first two books in the Reykjavik Noir trilogy, which have hit bestseller lists worldwide. The film rights have been bought by Palomar Pictures in California. She lives in Reykjavík with her partner.