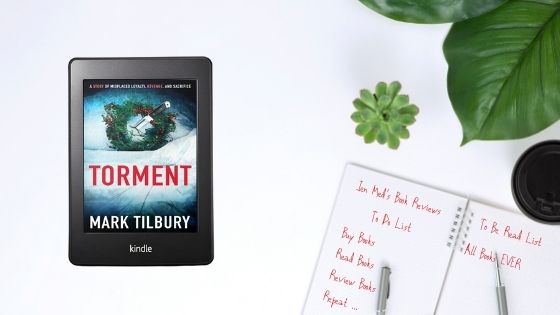 Today I’m delighted to be resharing my thoughts on Torment by Mark Tilbury as part of the blog blitz to celebrate the books re-release with a brand new cover. My thanks to the author for including me in the blitz. Here’s a look at the all new cover and a chance to see what the book is all about:

When someone wants you dead, is there anywhere to hide?

Who can you really trust?

Beth couldn’t be happier. She is eight weeks pregnant and married to the man of her dreams. But after returning home from a celebratory meal, she finds a wreath from her sister’s grave hanging above the bed and a kitchen knife embedded in her pillow. There are no signs of a forced entry. Nothing is stolen. And no one other than the cleaner has a key to the house.

Then a campaign of terror begins. Beth becomes increasingly paranoid as it becomes clear that someone close to the family is behind these disturbing events.

But who would want Beth dead?

Does the past hold the clue?

And can Beth find the answer before it’s too late?

Torment is a story of misplaced loyalty, revenge and sacrifice.

Mark Tilbury is the bestselling author of multiple thrillers including You Belong to Me, The Liar’s Promise and The Abattoir of Dreams. Torment is a dark and compelling psychological thriller which will appeal to fans of authors like Mark Edwards, Charle Gallagher and John Nicholl.

If there is one thing that you can rely on from author Mark Tilbury, it is that he is going to bring you a story which is full of mystery and tension, not afraid to go to the darker side, and that will be, overall, entertaining. That is exactly what you get when you start turning the pages of Torment. This the story of Beth, a woman who seems to find herself the victim of a vicious and predatory stalker, who not only sends threatening messages, and carries out vile acts that will have animal lovers up in arms, but who seems to have access to Beth’s house and, by default, Beth. There are things they know, things they have seen, which serve to unnerve Beth to the point of paranoia, until the worst happens and she becomes not just target but victim.

Now I won’t lie. I know everyone says it but I did have my suspicions quite early on about who was behind the campaign of terror, and I’m quite sure many other readers will too. That said, I was still captivated by the book, wondering when the penny would finally drop for Beth and how far the perpetrator was going to push her before they made themselves known. And it seems that it was pretty far, and there are some pretty devastating consequences of their actions, one of which is to drive a wedge between Beth and her husband. But can he really be trusted? Could he possibly even be the one behind the torment?

Well, you’ll have to read to find out. That’s how these things work.

I love how Mark Tilbury has once again created a very broad cast of characters, some of whom are more likeable than others. I wasn’t entirely sure how I felt about Beth all of the time to be fair, largely because I found her to be naive and far too trusting. Not negative qualities, granted, but the kind that if she were in a movie, she’d have you screaming at the screen not to open the door to the obvious killer, that kind of thing. Her husband, David, was someone I did warm too, although his actions were also suspect and there were several times I was left questioning his true motives. Then there was Beth’s best friend, Kim. Herself a victim of violence, she was still a larger than life character. Read the book and you will know what I mean. Quite dominant and definitely very demanding, she’d eat you out of house and home if you were ever unlucky enough to have her as a house guest.

There are the trademark moments of gruesomeness that we have come to expect from a Mark Tilbury novel, although less so than in some of his other titles. This is more of a domestic noir with a dark stalkerish edge and, as such, as a lot of the action takes place in Beth and David’s home, it has a claustrophobic quality to it too. There are moments where the tension really ramps up, where the stalkers final game comes into play, that will have you on the edge of your seat, and times where there seems to be no way out for Beth. Certainly the motives are drip fed to the reader throughout and, if you pay attention, you will be able to deduce why Beth becomes a victim without waiting for the big reveal. It’s still a classic all stakes showdown when it comes though and won’t disappoint fans of the author.

If you like a good domestic noir/stalker novel, one where the threat is brought front and centre, that dances around the edges of darkness without ever being too gratuitously violent, then this book will definitely appeal. Tense, full of suspense and gripping to the end, if you are a fan of the author, you’ll want this in your collection, as it’s another fab read. Newbie’s to the author need not fear – as a standalone novel, it’s a great place to jump aboard the Tilbury train too.

Mark lives in a small village in the lovely county of Cumbria, although his books are set in Oxfordshire where he was born and raised.

After being widowed and raising his two daughters, Mark finally took the plunge and self-published two books on Amazon, The Revelation Room and The Eyes of the Accused.

He’s always had a keen interest in writing, and is extremely proud to have had seven novels published by Bloodhound Books, including his most recent release, Torment.

When he’s not writing, Mark can be found playing guitar, reading and walking.

One thought on “Torment by Mark Tilbury”